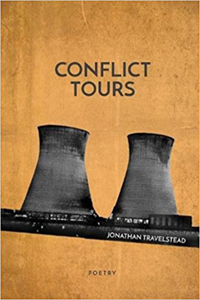 My day job entails organizing literary events around the state of Utah, including a statewide book festival that happens each fall. In 2015, a colleague sent me a copy of Jonathan Travelstead’s first book, How We Bury Our Dead, a wrenching collection of poems detailing Travelstead’s tour in Iraq with the Air National Guard, the loss of his mother to cancer, and his work as a firefighter in Illinois. I was floored by the work, and during a brief conversation at a conference that spring, invited him to Utah for a couple readings as well as a workshop with veterans.

A few months later, we were just a couple blocks from the VA hospital when Travelstead looked at me and said, “You know, I’ve never done this before.” He was nervous, and now I was nervous, though I tried to downplay it. It had never occurred to me to ask him if he had worked with veterans before. Something in his eagerness and confidence, as well as the candor and compassion in his work, just left me assuming he had. I had no reason to worry. What followed that exchange was a two-hour discussion of Yusef Komunyakaa, Anne Caston, and many others, as well as a poignant conversation on how writing allows us to navigate anxiety, loss, and healing that left even the most reluctant of participants captivated. Some wrote about their military experience for the first time in their lives. Travelstead looked like he’d been there a thousand times before.

It is this same Travelstead that we see time and time again in his second collection, Conflict Tours—throwing himself headlong out of his comfort zone repeatedly, because of curiosity, empathy, or simply a desire to be engaged, to be helpful. The conflict of the title is real, be it life and death struggles along the U.S./Mexican border, the literal and cultural fallout that remains in the Ukraine following the Chernobyl disaster, or Travelstead’s own struggles with ADD/ADHD. Both the military and recreational connotations of the word “tours” are at play, sometimes simultaneously, and Travelstead does not shy away from the complexities that the roles of soldier, fireman, or tourist carry with them.

The book opens along the U.S. border with Mexico, where Travelstead volunteered for a stint with the border patrol and witnesses the abuses that transpire throughout this landscape. He condemns much of what he sees, but also places such tragedies within a larger cycle of abuse that immigrants of all backgrounds have been subjected to throughout our history. In the poem “Field Worker,” he compares the black-lunged fate of his coal mining great-grandfather to the field workers of the Southwest exposed to agricultural toxins daily:

My eyes open again on the fields, and I see hours when minutes
are all we have, field workers trading

the only previous thing they have for what settles in the hands
before reaching the lungs, their family, I see the working dead.
Grandfathers and children alike, their leathery hands

Or in the opening moments of “Border Patrol, Arizona,” where Travelstead is thrown immediately into the role of a medic with frighteningly insufficient resources:

The square-jawed sergeant snatches my order.
Nothing that matters burns here. Congratulations, Airman First Class—
You’re a medic. Shunts me to female private beneath
the basketball hoop, who, with an IV and an orange bruised soft as skin,
instructs me on the military’s care towards aliens.
Cups my hand clasping the orange in hers. Finds the sweet spot in four
or less punctures. Suddenly it’s my lone hand holds the fruit.

Travelstead’s sympathies clearly lie with those wandering the desert, be it for the benefit of their families, or in the attempts to flee violence, only to find themselves in the arms of another, albeit slower, form of violence. The stories of his own immigrant ancestors are made flesh and blood repeatedly in the poems. The duplicity of those the migrants encounter is clear, as with the farmer in “Riding the Beast,” who is happy to have the help as “no one educated enough for English picks / in the upper branches” but then jokes about the dangers of train hopping his workforce endures when “a hundred chalupas atop a train is a family portrait, / but when a train car slices into a low-slung tunnel / it’s a damn good start […]”Ultimately, the border becomes a seemingly arbitrary and meaningless method of rationalizing greed, racism, and dehumanization. It is a place where we are left with the same question posed to the poet by two wild horses in a later poem, “Tell me who you are to draw a line / our myths cannot cross.”

The poems in Conflict Tours oscillate between concerns external and internal, but the poet’s personal conflicts receive every bit as much scrutiny as the troubles he witnesses in geopolitical hot spots and war zones. Ostensibly, section two and its detailing of long bike trips and Appalachian Trail hikes lands the reader in a lighter place than the border poems. However, it becomes clear quickly that the physical activity and endurance inherent to these activities are both recreation and an ongoing challenge, a means of working through anxieties resulting both from the poet’s professional and military experiences and from his own ADD/ADHD. “Ultralight” opens this section and is a litany of the objects in the speaker’s pack along with their corresponding weights in grams. It ends with a declaration of emotional weight and surety that would make Tim O’Brien proud:

Closed, I clutch the blade
dangling loose from the slipknot on my chest strap—
less than a kilo of pull and it’s freed. Bumps
tumoring my hip-belt pocket.
Adderall. I know where everything is,
exactly how much I carry.

The aforementioned Adderall, what Travelstead calls his “pitbull pills” are a constant companion in the poems. They become, in many ways, a character in and of themselves, as in “Rapture,” an ode of sorts to the clear-headedness they allow:

[…] Hummingbird
nested in the space between ribs. Your last thought,
you are it, sustained forever.

O Benzedrine, Dexedrine.
O cold blue angel of methylphenidate, Concerta, and Ritalin—
I hum with praise, I hum with joy

The complexity of this relationship becomes central in the book’s third section, which is devoted almost entirely to exploring this state of anxiety and how a regimen of medications, physical exertion, and wanderlust allow a means of navigating through them. “Analysis Paralysis” illustrates how even the most banal tasks become impossible in such a state of mind, while the poem’s staccato, checklist form creates just such a state for the reader:

The titles of the book’s third section alone are indicative of the ups and downs which Travelstead is both enduring and exploring in the work—“Pleasure Principle (Pitbull Pills),” “Scientist,” “Analysis Paralysis,” “Failure,” “Monster,” and “Ghost.” But there is also something in the long, expansive lines that populate many of the poems, and with which Travelstead is so adept, that strips the poems of ambivalence and makes his work an emotional tour de force. Nowhere is this on display more clearly than in this third section, in poems such as “Failure”:

Better to forget what plateau means, and the law of diminishing returns,

how muscle ceases making gains when worked the same way twice.
Sometimes even I try unyoking myself but Failure’s been calling the shots
so long he’s not going to give up. Laughs like a loon imitating a hyena.
Jerks the chain tighter, and this time when he smears my face in it

I come away with a bloody nose […]

Though its poems are more historical in nature and perhaps are more precise in many ways than the more personal work in the poems that precede them, Conflict Tours is at its best in its fourth section. The section is a collection of nine poems that traces Travelstead’s journey through the Ukraine, particularly his time spent in the “Zone of Alienation,” the restricted zone around Pripyat, the town evacuated after the meltdown of the reactor at Chernobyl. Here, we meet Oksana, his guide to the Exclusion Zone who, with the aid of various radiation detectors, helps him discern where he can and cannot go. We encounter glowing trees, the eerie, fly-by-night state of Pripyat, which is being reclaimed by the forest around it, and the abundant wildlife that has returned to the area. The cognitive dissonance that such a place should cause any visitor is a treasure trove for Travelstead, as in the poem “Proximity,” where he is astounded by the indifference of the nearby wildlife to their presence, to which Oksana responds,

or pride, but time and nearness that make us forget
what is truly dangerous. A window
on the third floor where her red hair blazed as she wheeled
to the white wolf like rolling thunder in the doorway.

Travelstead calls his travels “an addiction to traveling to places of internal or recent conflict.” It would be easy to dismiss such excursions as disaster tourism were it not for the empathy that is always centered in his work. Nowhere is this more evident than in the poem “The Liquidators” which functions as the heart of the Chernobyl poems. In it, we discover that Travelstead’s motivation for visiting Pripyat lay not so much in its devastation and reclamation, but in a kind of pilgrimage to the monument left for the liquidators—the fire fighters and other first responders who lost their lives battling the initial fire and trying to contain the subsequent contamination caused by the meltdown—and to research the hours leading up the hellish circumstances that cost them everything. The poem is an in-depth look at the interactions of the Chernobyl Nuclear Power Plant Brigade and the Pripyat Brigade as the meltdown began. Travelstead is technically precise in the jargon and dialogue, while still compelling. We are thrown headlong into what are essentially lyric logistics, and they are heartbreaking:

Thumbing the mic, I recall the rate of depletion, our half-life in these conditions,

and the assurance in Newton’s Second Law that there is no death,
but a changing of energy. Put out Reactor Four or they’re all going up!
Some relief comes when Commander Leonid arrives,

assumes command from the roof of Reactor Three where he directs
extinguishment of five fires formed into tornados of their own weather.

That Travelstead would journey across continents to one of the least tourist-friendly spots on Earth in order to pay the briefest of  respects to his firefighting brothers says as much about him and his work as anything I can say here. The complex empathy of the poem, the giving of a voice to those memorialized in a place that essentially no one can visit, only reinforces this. It is a feat he replicates throughout his work, and is perhaps best summarized in some of the final words of Vladimir Pavlovych Pravik, one of the two members of the power plant brigade to die that day:

In the silence I mouth Thank you, that I am become a tool

Posted by Sugar House Review at 11:13 AM No comments: