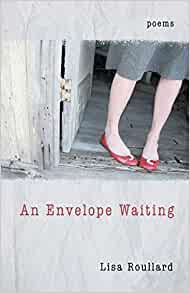 Here in this envelope-slender chapbook’s first poem, a young girl skinny-dips in the lake, “her sundress an envelope waiting,” like magic waits, like something to be mailed from a fairy godmother. And here is the mailman, “seated / on granite,” eating an apple, reading magazines, almost seeming to lurk, to stalk, but he is benign. He is more bird than wolf—not spy, not seer.

The mailman’s intentions are on safari, under water, almost rising through scenes of bath steam. He is wished for by the girl, but only as a way to deliver her secrets, not the message or the messenger, but only the carrier. He carries messages “so real as to be // hazardous.” Holding suspense mid-story, the poems take a break in the carport.

So the mailman sits, suspends

what he places in people’s lives.

Meanwhile, the girl is “full with holding still, with staying,” but she doesn’t stay. At the halfway mark, she’s moved. She’s now the “I” of the story, the heart, the sex, the handwriting.

I itch for the chance

to slip to the sealed

The ripping refers to paper, or perhaps to the sundress in the first stanza. And then she is the stamp, licked, affixed, “shimmy-tickle.” She is the mailbox, her “one sweet door,” and above that potential opening, like the “single wing of a bird,” her flag inviting the mailman to reach inside. Oh, what sweet innuendo are Roullard’s metaphors.

Now the mailman reappears, arcing the story, throwing bread to ducks at the lakeshore, tossing catalogues that flash open like tropical birds, folding origami beaks, wings. There the girl appears again, at the table with the mailman, grown up. She is folding, falling into “proper pleasure,” prepared to be the ink, the page, the handwriting. She is the lightning-struck tree, “Charred and stark,” and she “will write with that char, / left-handed as the heart / which often smears / what it has to say.”

Roullard, though, is a poet of clarity. Her words don’t smear or smudge. Placed just so, her lines and stanzas are “sealed and stored with messages” to entice the imagination. And though she gives the mailman the final poem, with its metaphor of pears falling into his bag like “little riddles of women,” the woman who started the story as a girl, who plays through the tale of these poems as envelope and letter, is at the end the “ripening hope” that gets the last say, as clear and true as if she were holding a magic wand.

Posted by Sugar House Review at 9:14 AM No comments: