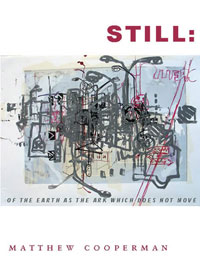 Still: of the Earth as the Ark Which Does Not Move by Matthew Cooperman
(Counterpath Press, 2011)

In his new collection, Still: of the Earth as the Ark Which Does Not Move, Matthew Cooperman gives readers poems of contemporary chaos filtered through a human brain and attendant nervous system. The work provokes multiple blood pressure spikes and drops within individual poems, though we ultimately come to sympathize with this scrupulous, self-observant list-maker and erudite poet. These 28 poems pencil out a fluid, incessant anxiety. In the Still: series the poet indexes his cache of persons, places, and things, setting his foundation to build list-like poems—Christ and Celine Dion, NASA and Gaza, arugula and hangovers—all the while future-tripping to The Three Horsemen of The Rapture. Cooperman holds close to his charged, disparate bits of information. Ordered on a page, they’re like digits on a spreadsheet in a bookkeeper’s ledger. Categories of interrelated subjects, pertaining to the poem’s title, are placed down the right side of a page. Anxiety “triggers” related to those subject headings are inventoried across the page, separated from their parent heading on the right by a colon:

Still: Winter
and the lanterns coming on: the oil price rising ($135 crude), the old furnace
functioning (2/3rds capacity), the body count rising (38%, 1/20/01–3/20/11)
Snowman: made of salt, or the salt made of man, a pillar standing in Whatzitstan
a soluble symbol, a salient salve, desert, deserted, dersertification […]

Like Frank O’Hara in his “I do this, I do that” poems, Cooperman gives readers a glimpse at how a brain filters the world. O’Hara was freer in dispatch, showing how he felt; Cooperman, not so much. He’s a straight guy poet writing about feelings. He hides them behind a wall of vocabulary, realizes what he’s done, and after being scolded for it, once again, the poet caves and shows tenderness or terror. He’s the guy who busts your chops before jetting home to take his twin boys to kiddie yoga; openly butch, closeted sweet.

Reading the collection start to finish in one sitting requires no uncertain stamina. The weft and warp of Cooperman’s bulging spreadsheets will unravel the unsuspecting reader, who will live the poem’s escalation from baseline worry to despair to stratospheric paranoia. However, the depth of Cooperman’s poems becomes apparent in subsequent readings. I am not erudite. I am curious. Faced with the obscure, I stayed close to my Webster’s, with Wiki and Google fired up. Accessible but not facile, the poet’s bank of cyber-ephemera and skillful nods to total annihilation come to life with terrific rhyme schemes and manic sparkle, while tonal shifts go Pushmi-Pullyu over the map of pyscho-social issues:
you are first
and on a
list complexly these
are hours and
days oh daze
to singularize and
bind disparities please
please baby please
make larger space.

Throughout, the reader is reminded how painful it is to be scared. All. The. Time. Yet, throughout the struggle, readers are asked to consider accepting life on life’s terms, as in the final stanza of “Still: Enlightenment,” “Problem: driving pictorial expressions of breath down a page about letting go.” Not inclined to acceptance, I prefer the stanzas with humming disquiet, like those in Still: Thirst, “Equation: coffee = the Enlightenment, Michelob Ultra Peach = the Decline.” The Still: poems alternate with brief, single stanza poems. Whitman, Crane, and what feels like Ashbery, color the verse. In this mix of poems, readers experience Dubstep pacing, measured, lullaby lines, and soft stumbles at frayed line breaks. These poems are like punctuation, a transition, or a rest from the dire lists, like this poem that sets up the reader for a new section:

The pattern is sucker-punched as we move into “Still: Shooting.” The poem beginsat a brisk pace, the humor in the first stanza devolving into severe turbulence in the second. The stunning simplicity and the chilling rhyme scheme of the secondstanza kills, literally in, “Location: grassy knoll, Indonesian atoll, Dakota Hotel,Arizona mall.” The shooting continues with a “roll call:” of schools and colleges,“‘Presidential Fatalities:’” and a well-timed injection of humor, “Announcer: ‘Yes,after a tough day sometimes a shooting game is all you need.’”

These aren’t static lists of whack-a-doodle thinking. Everyone’s anxious, hence The End Times people, the Global Warming People, The 9-11 Conspiracy People. The poems are morning-time gnawing in your gut before hopping out ofbed. We’re all afraid of some force taking us out, and Cooperman has catalogued a glorious pandemonium of grown-up considerations to feed off.

Visuals, typographic and otherwise, accompany Cooperman’s poems. Pages of white typeface floating on a black ground are interspersed throughout. Letters, dropped from words on the black pages, disrupt quotes from Harriet Tubman and Kathopanisada, The Serenity Prayer and Corinthians. Crumbling platitudes are no longer reliable. Sprinkled throughout are iconic fonts and logos of name brands; Coca Cola, Ralston Purina, Trojan Condoms, Playboy, and Nikon imply the root of all evil once removed. Cooperman’s visual aids suggest society is totally doomed.

At 116 packed pages, the freshness occasionally disappears; a rhyme scheme doesn’t hit the mark, a stanza doesn’t scan. It takes a DeMilleian effort to sustain this level of energy. Cooperman succeeds despite minor blips in the final cut. He takes risks with mechanics and reputation. Simply put, he has the nerve to let his readers peek and poke at what goes on in his vivid imagination. Near the conclusion of the work, however, the poet really goes all out with a direct poetic declaration in “Still: Here,” “Author: and in the end, I’m still here, I am always in the book, a somewhere I
am […].”

“A somewhere I am” nails it. The poet’s self-exposure made this reader squirm. As someone who obsesses about the inevitable or the unimaginable, Cooperman’s poems do come around to something I easily forget—hope eternal. If he can hang onto that, I suppose I can too, and hope for a world that eschews Michelob Ultra Peach for the refinement of coffee.

Email ThisBlogThis!Share to TwitterShare to FacebookShare to Pinterest
Labels: Spring/Summer2012