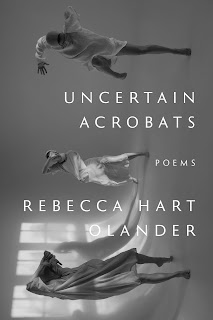 Rebecca Hart Olander's memories of her father are of a man who “claimed Magician” when her birth certificate asked for his occupation, who was a teacher, a runner, someone equally at home naming birdsong and Motown artists. So it is no wonder that his death at sixty-eight inspires her debut full-length poetry collection, Uncertain Acrobats, poems that memorialize a life richly lived, a father deeply missed.

Hart Olander is herself a teacher, an editor of Perugia Press, and author of a previous chapbook, Dressing the Wounds (Dancing Girl Press, 2019). Perhaps this biography is part of her father’s legacy. But his influence doesn’t end there. Through his voracious tastes, Hart Olander is exposed to Thoreau, Cather, Aesop, Steely Dan, and something called a Beefaroni chess tournament. The poet recognizes that he was “that wide-awake man, / always craving something in the night, [his] appetite / so strong for life and all its delights”

When his cancer returns and his prognosis is grim, she can’t help but consider who he has been, the runner “in your sweaty, sun-worn baseball cap, / your skin browned from being in the world,” the “belter of songs / and strummer of chords / backgammon partner” the man who taught her how to drive and how to do algebra despite his own struggles with the subject. And while her father’s individuality clearly emerges based on her accumulation of images and memories, what is universal in these poems is the complex and long lasting nature of grief.

Amidst the chaos of emotions that is loss, there is a desire throughout this collection to be grounded in the concrete. Hart Olander is a truly New England poet and her images attest to this. Her poems reference Gloucester’s Good Harbor beach, cranberry bogs, yellow farmhouses, Fenway franks, and Heartbreak Hill. She recalls her father “wading in gaiters / through the snow” behind his house. Her poems are full of stone walls, cellar holes, yellow warblers, jelly tooth mushrooms, hawks and crabapples. These missives from the world around her, so present and alive, form a vivid contrast to what she is missing, this person both very real and mythical. In “The Whale,” she imagines her father as “that creature under the cold Atlantic blanket / migratory mammal, singing a complex song, / large heart beating in time with mine” But whatever she imagines, whatever images from this world stir her memory, she is left with the reality of his absence.

The collection is truly elegiac. Here are the characteristics of the loved one, memories as simple as him tossing coins in toll booth baskets, as poignant as singing happy birthday into his daughter’s answering machine, as painful as him being “rendered speechless, / on a gurney, clutching [his daughter’s] hand” There is also the consolation his bereaved finds: “my father, in the woods / like stars in the ether, spangling / everything in a wash of light” Finally, there is the daughter’s struggle between her private feelings and decorum. How does one move forward, resume whatever constitutes normal life? One way is to adhere to what has always guided poets through the most complex emotions. Hart Olander controls what she can control. These are carefully constructed poems of couplets or tercets, of balanced stanzas and measured lines. Free verse, yes, but meticulously handled, a blueprint, actually, for what it means to craft a poem, as in “There’s No Place Like Home,” composed in tercets about the speaker and her father finding a screech owl. Although there is some joy in the discovery, Olander’s speaker is not blind to omens:

Through doubled-glass we focus on the russet

bird, casting her as an avian wizard behind the curtain.

But some things can’t be known until we know them.

as the predator descends, digs in her talons,

and shakes us until we are still.

Finally, there are no easy answers in these poems or in the human struggle to live with loss. In “The Acolyte at My Door Asks Me, How Do You Pray,” she writes what we all wonder:

How, indeed? Though stumbling upon the words of someone who has felt as we have felt is more than small consolation and still a poet’s most important vocation.

Carla Panciera’s collection of short stories, Bewildered, received AWP’s 2013 Grace Paley Short Fiction Award. She has also published two collections of poetry: One of the Cimalores (Cider Press) and No Day, No Dusk, No Love (Bordighera). Her work has appeared in several journals including Poetry, The New England Review, Nimrod, Painted Bride, and Carolina Quarterly. A recipient of a 2022 Massachusetts Cultural Council Grant in prose, Panciera’s second collection of short stories, Barnflower, will be published by Loom Press in 2023.