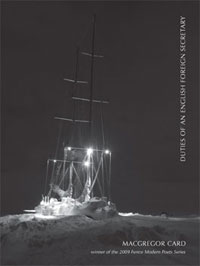 An electric generator is a device that transmits mechanical energy into electrical energy. A simple AC generator consists of a strong magnetic field, conductors that rotate through that magnetic field, and a means by which a continuous connection is provided to the conductors as they rotate. Each time a complete turning-over is made by the rotor, a cycle of alternating current is created. Thus a rotational energy is converted into an electrical energy. Rotation over time can be graphed as a sine wave, fixed points along the wave’s curve corresponding to events along a rotation’s unfolding in the flow of time. If such a waveform is centered on 0, its point of equilibrium, and its high peak is 1, then its low peak must be -1. The line of a sine wave turns and returns (or returns and turns) to its high and low peak as it unfolds in time.

In the poem, “Nary A Soul” in Macgregor Card’s Duties of an English Foreign Secretary, Card’s speaker states:

If I could
If I no could

If I could: high peak. If I no could: low peak. Here the waveform is centered on I, the couplet’s subjective equilibrium. The peak to peak voltage of the couplet is something like the relative value of could + the relative value of no could. In this case, the peaks are understood to be of a class of subjective possibilities, If I could: the speaking subject in the conditionally possible mode; If I no could: the speaking subject in the conditionally impossible mode.

As the figure rotates its conductive high and low peaks through the charged field of the poem unfolding in time, energy is generated. Of course various devices might be operationalized to conserve and/or also generate more energy:

The figure of the first waveform is present in the second couplet, but its material spine has been reordered in rhythm, repetition, and variation. If oscillation can be understood as repetitive variation in time about a central value (a point of equilibrium) or inversely between two or more different states (in this example could and no could, but the states need not be opposing), then oscillation is what’s happening here.

From “The Merman’s Gift”:

Another reversal, another oscillation. From “The Libertine’s Punishment”:

Something is moving beside me
Nothing’s supposed to be there

Equilibrium here is the position between the something that is and the nothing that is not. Oscillation occurs in the charged field of presence, absence, expectation, fear, doubt... Cartesian geometry is insufficient to the task of this field’s mapping as there are too many planes for it to express.

In Duties of an English Foreign Secretary, Macgregor Card searches for (and finds!) those figural planes capable of expressing and so transmitting the energy of his nimble, terrifying, hilarious, melodic and significant poetic oscillations between sets of peak values: contemporary cityscapes to depth charges of historical conventions and texts; plunges into the complexities of a relationship (romantic and platonic modes both) to recoilings back from the social milieu; the subjective plane of present earth to the objective heights of the air, which turns out to be just as contingent in its flickering phenomena as anything perceived at the firmament. In the wash of the work’s music, points of equilibrium blister out of the text as certain subjective perspectives. Often roles such as juror, maudit, and my favorite: the sun’s own paned ajudicant. Roles are taken up or avoided, embraced or shunned, constituting another oscillational plane of the text. Oscillations set into the fields of other oscillations, e.g. in “Gone to Earth” a social interaction in the air permutates to a private kind of night in the tomorrow possible on the ground.

Often feeling talked about
or bored
I’ll start to count, but it will pass
Haven’t seen one beast today
Gone to Earth
It is too near–maybe I can tell
It’s difficult to clear the air

Tomorrow I will find a kind of private night

Card is at all times clearly conducting the oscillations of the poems in Duties. He does not do so from behind a shroud, like an idiot tractor-driver with a paper bag over his head expecting the children at the field’s edge watching him to believe the field plows itself; nor is he standing on one foot on the tractor seat, with his scalp dyed red and his clapping hands, screaming at the children over the knocking engine to collectively acknowledge a projection of his self. Card is clearly present as the conductor within each poem of Duties, driving the works’ turns and returns phrase by phra se. Card shows the movements of his hands in his struggle with the material of the text in its necessarily non-Cartesian geometry, and Card’s secret suit lies in this open handling of the poems’ material. Furthermore, through motif, melody, pathos, humor, rhyme and theme and variation, and other devices, Card beckons the reader to join him in the poems’ oscillations and transmission of energy, in the working out of its movements. It is in this aspect of his work that Card draws his cues most significantly from the Spasmodics, the group of Victorian era poets characterized by their verse dramas and lengthy introspective soliloquies. The Spasmodics ascended quickly to popularity, and just as quickly to derision, their namesake taking on a derogatory aspect in most modern criticism in spite of its link to canonical figures like Tennyson and Browning. Sidney Dobbel is a Spasmodic Poet who Card has promoted outside the text at firmilian.blogspot.com and acknowledged within by Duties’ title and inscription.

Card’s struggle to manage the sonic/linguistic material of the poem is something that can be heard and read throughout Duties. In essence, Card shows his work at every turn (or return), thus his authority is transparent in his open struggle with the text’s material. We see, in fact, we hear and therefore feel, phrase by phrase, how Card made his compositional choices. Paradoxically it is Card’s quickness and poetic skill, his nimbleness in music, word play, and phrasal movement that makes the book wholly his own. So we have another oscillation, between transparency and mastery. But at certain moments it is this mastery that can sling the reader from the text. Certain moves perhaps might be considered over-nimble, moves so quick as to wrench the reader from the poem and into the dirt of pragmatics’ arena. Perhaps that is the cost of such productive experiments in the generation of energy through poetic oscillation. Nevertheless, through his precise management of affective devices, the motifs, melody, pathos, humor, rhyme and theme and variation mentioned previously (devices of which Dobbel was a master), Card by in large supports the reader throughDuties’ interelational unfolding, and in so doing he harnesses Duties’ high-charge oscillations to powerful poetry.

What geometries then could describe the energy dynamics of interelational oscillations such as those that Card executes in Duties of an English Foreign Secretary?
Posted by Sugar House Review at 10:31 PM

Email ThisBlogThis!Share to TwitterShare to FacebookShare to Pinterest
Labels: Fall/Winter2010