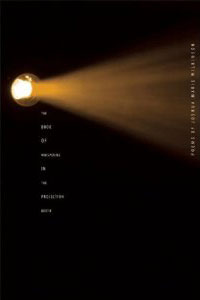 The Book of Whispering in the Projection Booth by Joshua Maria Wilkinson
(2009, Tupelo Press)

“What you lose/cannot be recovered if the light is wrong. What you speak will always have/the capacity to break you. If this is clemency, I’m learning to be aligned with/its torque & needles, with the glug of its voice through water.” So begins The Book of Whispering in the Projection Booth, the fourth collection by poet Joshua Marie Wilkinson. As the passage above implies, light is crucial to this work and the modifiers of light in the poems are many—jewel light, copper light, sleepwalker light, undoable light, thimble-light—just to name a few. Over his first three collections, Wilkinson, who is a filmmaker in addition to being a poet, has slowly built a projectionist’s mythology, a mise-en-scene created with idiolect and parataxis, held together with, ironically, an emotionally volatile and fragmentary aesthetic that is unmistakably his own.

These elements coalesce in The Book of Whispering, where Wilkinson has honed his craft to the point that he is now cutting, editing, and hand-painting the brief frames of his poems not before the screening, but as the reel is spinning. The transitions are sudden, dramatic, and yet in Wilkinson’s hands they occur with a seamlessness that is eerie, not so much like dreaming as they are like sleepwalking (a theme that recurs throughout his work)—the unsettling and yet strangely enlightening experience of waking up again and again in a strange place without knowledge of how one got there but knowing all too well that the body or the guide has motives and motions of its own. Such moments are many in Wilkinson’s work as in “light blew open the hutch & a boy saw it,” which ends:

Coin-operated telephones, Laundromat pinball, & airport televisions
attached to their seats. What of this will we remember with our hands?
What tent will find you as warm night air? How many stories were you
asked to bury & which ones did you bury?
The plants grew a hutch around the raccoons & the children grew a city
around the hutch.

Or in “a brief history of the developer” where we are given a brief look inside the darkroom only to be redirected again and again:

…This happened before the fires took
the trees to charcoal, before the white fish were locked in the ice of the
fountain. I am the boy who took the pictures you’ve seen. This is my sister
who developed them without her gloves on. These are her hands.

The cinematic quality of Wilkinson’s poems cannot be stressed enough. His work is visceral, compacted with imagery that vacillates between mundane and surreal. In the prose poems, he relegates abstraction to the spaces between sentences, leaving it up to the reader to make the leap of faith across them. He further reinforces the episodic qualities in the shorter, syntactically broken poems that appear periodically throughout the book. These poem series, like frames on a filmstrip, are separated ever so briefly by a break, a dash that reminds the reader these are the briefest of still moments strung together into a storm, a life lived in minutiae but relived in a flurry, as in the sequence:

Four days
since I found
the clawhammer in the mailbox
attached to a note
which read,
You will need this when I come back
______

Nest of possums in the orchard,,
skunk grasses lay flat, & a mare
sniffed them, spooked them.
______

Photographs of where the river
tugged our laundry line down
& it brought the edge in
off the edge.

These shorter sequences, while not as strong overall as the prose poems, provide welcome breaks to the longer pieces in that they provide a kind of reverse exposition or abbreviated flashbacks. Rather than providing the reader literal and exhaustive contextual notes, these poems are condensation and distillation of shared experience, the serifs and flourishes that, like Wilkinson’s “letter where I already/concealed you” make the moment and its mislaid emotions recognizable.
Despite the fragmentary framework of Wilkinson’s work, its emotive quality is remarkable. These are not confessional poems and one would be hard-pressed to confuse the anxiety and disorientation that frequents the poems with pathos or anything even bordering on catharsis. It is both easy and enjoyable to make the authorial fallacy in these poems, to make them biographical and place Wilkinson in his “kingdom of the phonebooth” or his “city of ferns and copper light.” It is all too tempting to see him as the boys listed in “deer & salt block.”

One boy is a liar & says there’s a block of salt under his bed to draw deer
in from the orchard. One boy says the pantry wall will open if you say
an untold anagram of his name…
One boy took a long time in the bathtub reading the
comics. One boy loops a tractor chain to the ceiling fan & tears the
whole roof down.

This effect is emphasized by the strange disparity inherent to the speaker in much of Wilkinson’s past work that is carried over into Book of Whispering as well. The speaker, while reasoning and speaking like an adult, often possesses an unmistakably childish or adolescent air and seems to constantly oscillate between awe and trepidation of the strangely lit world around him, as in “the thunder makes its easy way into your whole family”:

You must take the boat on your back & then onto your bicycle. You must
carry the news in your top hat. You must reckon with the autumn’s sorcery
& take it to school in your thermos. You mustn’t clear the table with your
crows & you must remain asleep in the bunk no matter who arrives

The speaker is accompanied through these pitfalls and curiosities by a series of totems that recur not only in this book, but throughout Wilkinson’s works. Rabbits and projectors, messenger girls and moonscapes appear again and again in the poems playing both ominous harbingers and luminaries for the conflicts that remain unnamed throughout the text.

Like the figures and landscape mentioned above, The Book of Whispering in the Projection Booth is ghostly and transient. Like a voice on a cell phone or radio that is slightly out of range, we catch Wilkinson’s missives in fleeting, crackling whispers only to have them disappear and materialize again a few feet later and hundreds of miles away. The book’s true grace is in how fluid the text feels and how it embraces its interruptions. We continue pursuing Wilkinson’s sleepwalkers, despite their irrationality and the instability of the ground. Like the speaker in “sparrowfield,”

…we are standing in that field. The
light is falling all over, developing us in the sounds of the chase.

Email ThisBlogThis!Share to TwitterShare to FacebookShare to Pinterest
Labels: Fall/Winter2010