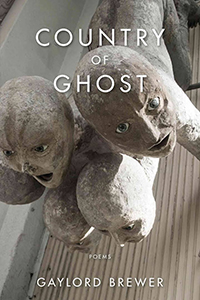 In Gaylord Brewer’s new book of poems, Country of Ghost, the reader follows a protagonist named Ghost as he deals with the afterlife that is happening right now all around the rest of us. While the title alludes to one country, Ghost’s travels actually take him through three: Spain, Finland, and France. The prominent motifs and themes of the book—regrets, memories, love, loss, family, and home—are made clear in poems with titles such as “Ghost Says Goodbye,” “On the Pier, Ghost Finds a Love Note, Paper of Seeds, and Accepts an Invitation,” and “Ghost Rehearses for His Funeral,”

Brewer opens the book in Spain with “Ghost Born.” We begin with the death of Ghost and his rebirth as a spirit who still has unfinished business in the land of the living. In “Becoming Ghost,” we are present at his funeral where, “Your secrets mean nothing to anyone now,” and Ghost himself seems to forget that he’s actually dead as he “breathes on for awhile—sorry nostalgia, so breathe.” It’s as if Ghost is fighting for relevancy and his life, and Brewer makes this fight one of the central themes to the book.

Also central to the book is the question of what happens in the afterlife? “Where are you going?” the narrator asks at the end of the poem, and then answers “Where you have arrived, of course,” as if the answer to the movement of Ghost is already predetermined. Ghost doesn’t take this answer lying down as he continues on as a spirit, as he continues doing the things a living person would, as in “Ghost Takes the Evening Bus, Briefly Dozes,” “Ghost Holds His Vow of Fasting for Nearly Twelve Hours,” and “Ghost Bleeds.” In “Ghost Takes the Evening Bus, Briefly Dozes,” we see Ghost

[…] work the crowd, seat to seat
lap to lap, so exquisitely exhausted
you’re sure of truth in each,

And near the end of this particular journey to a destination that Ghost himself doesn’t name, but by sight, he writes, “Next stop, perhaps one after / that’s yours. Don’t worry—you’ll / surely know when you see it.” Ghost is merely a tourist in his own memories, but he longs to do something about it. For a person that’s dead, Ghost certainly lives on.

Brewer’s tone through these pieces is melancholy, but with a wink and a nod to a hope, even in the direst of situations in which Ghost finds himself. There are no fixed patterns here in the structure of the poems. Much like a ghost, Brewer roams where he wants to with his phrasing. In the aforementioned “Ghost Rehearses His Funeral,” Brewer is almost staccato in the first stanza:

Later on in the work, the syntax opens:

Lie now on the black down
of your bed-giving pillow,
still room, last rites of silence.
Cross hands loosely one upon
the other, where the heart lived
its urgencies and desires.

Brewer’s work leads readers to be more mindful of their own travels and day-to-day existence, more aware of the subtleties and the finer details of life. Country of Ghost is essentially a travel companion of a life once lived and lived again. Though it moves through well-tread themes, it travels well. Brewer’s Ghost is more real, more complex than our moaning, white-sheet stereotypes. Ghost regrets, particularly when his wife shows up from time to time in pieces like “Ghosts Says Goodbye,” where he looks at a photograph and remembers “Your wife, your home, the man you meant to be and became instead.” But before the end, Brewer again offers a hopeful sliver:

And yes, if there were a ghost
of a chance for one blessing more,
deserved or otherwise […]

John Franklin Pickett, III, received a BA from Florida State University’s Creative Writing Program and is currently a professor at Northern Virginia Community College and National Defense University. He has work forthcoming in Apalachee Review this fall.
Posted by Sugar House Review at 9:01 AM

Email ThisBlogThis!Share to TwitterShare to FacebookShare to Pinterest
Labels: Summer 2016