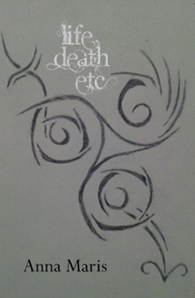 
Red Moon Press’ lifedeathetc / livdödetc, is the debut collection in the U.S. from Swedish poet Anna Maris. As its title implies, lifedeathetc holds to the natural cycles traditional to the haiku form, but Maris’ work is not confined by these conventions. Without unfolding the centuries-long history of the haiku tradition, it can be noted that Maris’s poems function within the well-known Japanese form that was initially composed of 17 syllables divided into three groups, respectively five, seven, and five syllables (more precisely, they are comprised of five, seven, and five morae, which determine syllabic stress or timing). Traditionally, haiku must include the natural world and should be in the present. The form originated in the 1600’s and its conventions have undergone numerous changes, especially in the 20th century, as it spread to the Western world and became a common form in other languages.

Maris, a member of both the Swedish Haiku Society and Haiku Society of America, translates her own work into English, and the translations are exceptional. In some places, the diction in the original Swedish is more melodic than English, while in other places, her English vocabulary provides a wonderful openness to the haiku form. One example of such differences in English is “paper boat […],” which in Swedish sails away with much more grace.

Whereas “long shadows” leaves one bird behind, graceful in its English alliteration.

long shadows
after the siege has lifted
a lone crane

Maris’ poems excel in their depictions of nature. For this reader, well acquainted with the Swedish climate, her work invokes the Scandinavian seasons vividly. The text in “Part One (life)” oscillates from one changing season to the next, one elemental state to another: sea to fog, to mist, to rain, to rivers—and back to the sea. There is the wind in spring, deep harvests, crisp frosts, and winter stars. It is an intimate landscape, but not a tame one.

This cycle of haiku arranged around Nordic weather might well be a mediation for spaciousness, nature juxtaposed against domesticated spaces—bedroom walls and ceilings as canvases for projections of shadows and light, but with uncanny cracks in the harmonies and monotone beauty, the arrival of the unfamiliar on the scene.

This hometown of strangers and its “icy winds” hold traces of other continents—Africa appears via references to Zanzibar just after the above passage­—but when we meet the outside world it is through violence or alienation. The world, like the icy Nordic setting, is closing in, shrinking like “winter fishing,” like “the hole in the ice.”

In “Part Two (death),” nature might be the same, but the poems are not. A specific pain has arrived: “the same hole in our heart / white chrysanthemum.” This loss is ephemeral, the “thing with feathers” and the words that cannot be found in a suicide note. Here, the uncanny gives way to darkness, but still the beauty survives.

insomnia
the cold on the other side
of the pillow

This is a good example of how the bilingual nature of the book opens up the poems in different ways. The original poem in Swedish has a distinct tempo created by the alliteration s, k, s, k, which is lovely to read and say aloud. Although it is not as melodic, the English version still preserves the stark simplicity of the metaphor. Here, in the heart of the collection, Maris is mourning the living, even as death becomes a physical weight.

packing up to leave
everything we have
dead weight

Whereas the previous part began with a whisper, “Part Three (etc),” begins with “open sky” and a sea personified through its overt desire to take. There is a change in pace, as well as place. The urban is more present.

This is a nature enveloped by the city, a nature both globalized and unfamiliar.

Winter is never far away, but monsoons appear as well, as do a new-year’s spider and wild boars in spring, and war. Again, the outside world is rife with troubles.

This last section of the book feels at times disconnected, as if it is in search of something. Its title, “Etc.,” implies a collection of things known, but unnamed. Perhaps for these reasons, it feels uneven. Or perhaps it is simply the stirring, for better or worse, that occurs when family enters the scene, the mirroring and defiance that their appearance brings. Here, we find a “mother’s angry wrinkle / in my selfie,” or, after the slow, rural rhythm of the life and death of the prior sections, the turbulence of a father’s appearance in the final moments of the book:

haiku
my father wonders
if that is all

As if the spaciousness of the first two sections is compromised by the onset of familial values, Maris invokes the natural world of the haiku. While much of the collection’s imagery gives voice to a particularly Swedish tone and setting, it is here, through the mastering of a classic poetic form, that her work grasps something timeless. These last poems left this reader wondering, like the father, but for very different reasons, how could it not be all?

lifedeathetc is a fine work of literature when it mediates the personal with the universal. When it positions itself in the contemporary, it is even better. There is currently a darkness in European societies, one which is difficult to write about and more difficult to live in. Within this space, Maris’ literary generosity is a pleasure and a gift. There is similar darkness in all lives, but to escape it is not to conquer it. Haiku offer a way to navigate such troubles. Maris writes them with grace; we can read them with hope.
Posted by Sugar House Review at 4:59 PM