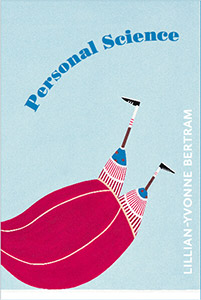 Dreams are seldom drawn from the void. The unanchored scenes, the acute images, and the vivid feelings of a light doze and impactful musings, these are drawn from experience and not from nothing. Lillian-Yvonne Bertram’s Personal Science is a collection of poetry that first mystifies, then touches the reader. Upon initial inspection, one may be tempted to think the book nothing but a series of half-remembered dreams, but deeper analysis reveals a grim and somewhat disturbing memoir. It is a submersion into Bertram’s stream of consciousness, which runs dark and wide.

Bertram’s writing creates a nebulous dreamscape, one of fading and flashing pictures, scenes that are often ominous. That fear suffuses the book with an atmosphere not unlike that which pervades a nightmare. Take “Homo narrans (chainsaw)” for example, wherein one of the only images described is that of “the blood spray on the garden’s wooden fence,” or the poem “Cerebrum corpus monstrum,” which begins with a terrifying series of implications:

Nothing to be preserved
By the idea of paradise.

The old dog’s ashes taken home in a cedar box.

The warbler with the cinched wing won’t take
From your handful of seeds.

Shoot into the crowd.

To feel the heart, you must
Put your hand in it.

The reader is left haunted, wondering at the grim scenes which continue throughout the book. They seem to jump randomly among topics such as phobias, relationships, farewells, and death. Initially, it all comes off as strange and disjointed, like the shadowy figments and fragmented memories of a mind on the edge of sleep.

A small, clarifying rule for the book can be easily overlooked at the beginning. In the first poem entitled “A little tether,” Bertram recognizes the mind-bending journey that the reader is about to embark on, and seems to throw them a life-line, a grounding cable to some form of reality.

With that excerpt, the book is charged with an authenticity and a exposure that captivates the reader, and shifts the tone. These are not riddles without answers, designed to confuse. They are reminiscence, a recalling of things muddled—of pain and fear, of abuse, of “cars [she’s] driven,” and of “men [she’s] known.” No order is needed when baring one’s soul, and the fact that Bertram is willing to do so merits praise.

Approximately one third of the book, the middle third, is devoted to a seventeen-page prose poem called “Forecast.” A nervous woman, possibly Bertram, suffers from an intense fear of flying. It drives her thoughts, ironically, towards every article she can find on flight, plane crashes, plane construction, and flight history. Her fear pervades every part of her life, overcomes her attempts to suppress it, and outlives failed and unhealthy relationships. In a way, her fear becomes one of the only constants in her life. Her need to check the forecast every hour of the day on seven different websites, her constant searches and studies, these habits accompany her throughout her life where almost everything else changes. The final line of the poem is a surrender to the fright. “The only safe place to be was in a plane,” and the only constant in the author’s life is fear.

These pages stand in a striking contrast to the rest of the book. They rise from a fog of imaginations, a mountain in clouds. They are full of concrete settings, definite actions and reactions, as opposed to the more amorphous scenes of the other poems. It is as though the reader is allowed to come up for a breath, before returning to murky, simulated subconscious.

As she mentioned in “A little tether,” the men she has known play into the story frequently. Unsettling depictions of violence and sex frequent the pages, especially in the series of poems titled “Legends like these I keep keeping.”

he made with the heat of his hands
the night before our wedding
made of my neck a bottle
then ran me down the alley in nothing but
a ghostwhite t-shirt & panties.

And then, later on in another “Legends” poem it reads:

unfuckable. and don’t ever let a man fuck you up against an air-conditioner
I told you, & don’t ask me why, just don’t be the kabob on a shish, all skin &
girl, ass against some window.

The alternating brutal and sensual details, alongside the explicit scenes, don’t so much hint at the speaker’s violent past, as much as they unfurl a host of chronicled dangers, a litany that bears repeating. Where the longer poems in the book have individual titles, “Legends like these I keep keeping” sets itself apart. Rather than it being just one poem, each page is its own moment, its own relationship. The legends that Bertram returns to are all relationships, each a different style, but all equally disquieting. Each is structured with a different form, tone, and voice, and each is a melancholy instance of trial and error, the experiments in Bertram’s deeply personal, scientific study.

Such poignant methodology is at the heart of this selection of Bertram’s poetry; it is an attempt to make sense of a life, a blending of experience, emotion, and things more indefinable. It is not an easy read, but it is a powerful one. It is a soulful collection, an acute and revelatory one. The poems never truly fit the mold of a confession, but they nonetheless work their way to a vulnerable reckoning. However, it is perhaps Bertram’s own “Homo narrans (iceberg)” that sums up Personal Science best:

The glittering iceberg
now not at all what I
thought.