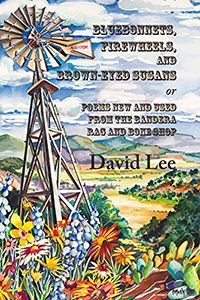 In his sixteenth book of poems, Bluebonnets, Firewheels, and Brown-Eyed Susans, David Lee does something unique, while continuing to appeal to the big-hearted, the irreligious, and those with a funny bone. The book unearths his remembrances of women who lived in small-town west Texas, much like the one he grew up in, from 1948–1962, grappling with a Baptist culture. Several of the poems are in women’s voices, resonating with what women still have to deal with overall, but especially in rural America’s tight communities.

“Poetry,” said Roethke, “is an act of mischief.” In his introduction, Lee warns us that this book will be so. He finds inspiration from his grandmother who wanted him to behave when he was four and told him to make up stories to keep himself from being bored. This is how he constructed his first tale. He dedicates the book to her.

Many writers and critics question whether writers of one gender can effectively get inside the mind of the other. Playwright Michelle Willens believes, “while women probably still write their own parts better, cheers for all who are daring to probe the ever-changing state of the sexes,” and literary critic Sarah Seltzer says, “[W]riting across gender may be harder, require more research and humility. We may fail or get ‘called out’ for letting our biases show…but the attempt at understanding, empathy, and inhabiting the soul of someone whose life experience is not ours, helps us grow as writers, and people too.”

Lee has given himself this challenge, it seems, to not only know and put forth what women felt, but to champion their strength and wildness, and to show compassion for their struggles. We come to know women who easily outsmart obtuse men, feisty women who know how to steal time away from family for their own pursuits, and who defy culture and religion to be themselves. The book also shows how selves and dreams became lost, while revealing subservience as a veneer, that no preacher or husband can snuff out a woman’s spirit. Men are foils for the women, who take center stage.

Take for example, the poem (astutely set in the parts of a Greek tragedy) about Amanda, who married the dull Reverend Strayhan. She chooses an “anonymous” name, Amanda Strayhorn, and becomes a famous erotic writer among the Ladies Literary Society, all unbeknownst to the reverend. Coincidentally, her bible-thumping husband suddenly finds his libido, having excused himself from his former belief that wanton sex is Satan’s evil. After drinking a Coors beer that is tasteless, he determines it is a sign from God that he can do what he wants, misreading bible verses to twist them to justify his sudden license while depending on the misogynist Apostle Paul’s credo, “That all things are possible in those who love the Lord.”

There is much more to this long poem—gossip at the Brenda’s Curl Up and Dye Hair House, ironic references to bible verses, and more of the Reverend’s excuses to become libidinous with his wife. By the end of the poem, those verses are riddled with puns, and the reader is wrapped in the melee that results from the unveiling of Amanda’s new identity, the reverend’s horrified discovery, and sides-stories about sex that intensify the irony.

Lee has said, “I don’t believe in a God who frowns.” He was a seminary student at one time, though he left the seminary and always thought it to be the worst mistake he ever made. His dislike of preachy-ness shows. In a prior poem, we encounter the voice of the town librarian, who finally puts the hypocritical reverend in his place, in the church parking lot after a service:

she said All my life
I have engaged in a love affair
with the written and spoken word
devoted myself as Custodian of Culture
to honor the right literary, civil, and genial
use of language which I have always
considered deity incarnate

until my contact with you
I believed we had sufficient wordage
such as malarkist, buncombe, vacuous troglodyte,
lambent dullard, cornaptious miscreant
all perfectly acceptable terms short of verbiage
for the socially and intellectually execrable
therefore I had never comprehended
manifest need for the coinage and usage
of the nominative cocksucker
prefaced by the adjective stupid
to create what seems on certain occasions
the formation of a perfect inferior syllogism
until now
and thanks to you
I shall never again be confused
by the etymological necessity […]

As this interaction shows, characters in the town intersect in at times, compounding our knowledge of their traits and how others interact with them. We get to know them, as if we live next door. In several poems, Lee seems to have to right something, especially between women and their husbands. “The Fish,” with its epigraph from Elizabeth Bishop’s same-titled poem, enjoys the plight of Arty Gill when he ignores his chores and goes fishing, comes home drunk, and dumps a load of fish in the sink, expecting his wife Modean to clean them. When she refuses and finally leaves for days, the fish putrefy, and Arty has no choice but to put on a gas mask and clean the stink out of the house himself, using a hose, and an elaborate mixture of odd cleaners. The epigraph lingers as the poem ends with Modean’s success: “…victory filled / from the pool of bilge / where oil had spread a rainbow […] / until everything is 'rainbow, rainbow, rainbow!'”

“Post Mortem After the Obsequies” features Mary Lynn, who looks back on her past, after her insufferable, emotionally abusive husband dies. He had consistently put her down, calling her Merlean, and never filled her desire for anything. She lost her dream to sing opera, and felt trapped. The portrait of her is drawn in her own voice, “I’ve never known the taste of truffles / but I’ve lived a life / cramful with trifles […]”

Towards the end of section “7 Coda: Last Call,” is an exquisite passage in which Mary Lynn deals with what is supposed to be grief for the loss of this man, knowing her mother’s and dog’s deaths were the only ones she felt true grief for. Lee substitutes wistfulness for grief, as her mind sets to resolve, to hope:

Lord God,
it’s one of those alone
hard red wine nights
foreshadowing a bloodshot tomorrow morning sky
spiral broken moon splinters scattered
all over the floor and on the furniture, lying
like breathing, open-eyed antimacassar
daring me to come sit anywhere near
pushing me out the back door scared
into the big alone

Oh, but breathe in the waft of a ghost rain
under a waxing cat scratch moon
floating through live oak
listen to the memory of a waif cinder maid
singing Una Volta C’era Un Re
and beneath me
exactly between my feet
a perfect moon-scarleted primrose
glistening in the rekindling of the night

Lee has mentioned previously that Mary Lynn’s voice is very close to his mother’s, and that the dead husband in the poem is his step-father. The poem appears to give Mary Lynn back a few of her losses, and to celebrate her life, even as Lee imagines what it was like for her to live much of it sadly. Still searching for herself in old age, the voice rings true, right down to the core of her loneliness, her fears, as well as finding hope and boldness in nature and remembered music, suggesting both of these gave her relief, and perhaps relief to Lee, in the knowledge of how his mother may have observed, reflected, and opened, as she moved toward healing.

This is new terrain for Lee in some ways, but it is still him at his best. The swells of it, its risks, spot-on vernacular, humor, tenderness, and depth that calls forth Chaucer, Milton, Dante, and Greek tragedy will be familiar to readers of his previous work. It is both earthy and erudite. He is a magician, a weaver of poetry-tales unlike anything anyone else has written. It is a delight to once again share in his fine mind and heart.
Posted by Sugar House Review at 9:08 PM