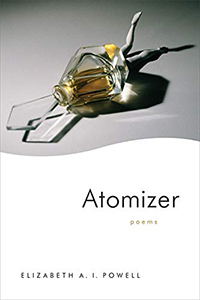 by Elizabeth A. I. Powell
(Louisiana State University Press, 2020)

Elizabeth A. I. Powell’s newest collection of poetry, Atomizer, is a lyrically critical examination of American culture with a specific (and often humorous) critique of online dating and the associations of smells; odors and sensuous scents drift into poems from memory and art, connecting humans to each other. Readers of Powell’s previous works, especially her poetry collection Willy Loman’s Reckless Daughter, and her novel, Concerning the Holy Ghost’s Interpretation of J. Crew Catalogues, will notice her continued fascination with how art builds a collective memory for future generations and how memory and relationships expose the way humans react to their environment.

Within the title poem “Atomizer,” Powell begins many stanzas with the label “(Memory)” interspersed with sensory experiences relating to dating and the scents associated with love and specific romances. Powell’s ability to transition from explicit childhood memories to ideas about the power of scent helps the poem build upon the speaker’s experiences of searching for her own identity. As the poem continues, it becomes more critical of online dating:

A formula means to build a form that contains sensual interplays that      exist within sense.

(Memory): Sometimes we argued under the hot sun of coriander and      citrus, or an

orchard of pomegranates that tried to set us free from algorithms that      market us.

The base notes bring depth, solidity to a scent, an associative connection.

This poem introduces some of the associative leaps that Powell will continue to make throughout the rest of the book as she repeatedly uses smells and other sensory language to question the speaker’s frequent desire for romance and love despite the lack of a suitable partner.

Powell mixes dark imagery with humor, particularly when writing about men’s sexuality, including an “insemination man” who comes to her grandmother’s farm and is described as “Mysterycow juice God.” The speaker knows that she “will read The Handmaid’s Tale soon enough” and then reflects on how much American society loves milk: “Starbucks… make[s] baby formula for grown-ups.” Her cheeky comments about cultural obsessions, from Starbucks to sex, fuse together with the peculiarities of the situations she creates, whether it’s an insemination man coming to the farm or other childhood moments, like getting her mouth washed out with soap in “Ars Poetica,” due to the speaker’s

how I loved the world so hard I hated it.

Things either clean or dirty,

my mother tried to make me say it nicely. I couldn’t.

There is a consistent tension within Powell’s poems from how the speaker wants to express her views of the world compared to how society refuses her ideas and neglects her. In “Killing Rabbits,” Powell confronts the confusing, contradictory information about sex and puberty to which children are exposed and how they are then left to fend for themselves, resulting in “killed rabbits,” which becomes a metaphor for unborn babies. Powell circles around images to tell a story, so that scattered throughout the poem are phrases such as: “I have killed a rabbit,” “this is before the abortion clinic bombings,” “Peter Rabbit was almost killed,” “Peter Rabbit ate soporific lettuces,” “everything I touch wilts,” “we use pull out methods,” “we fuck like rabbits,” and “death is everywhere and pretends to be life.” Powell’s stream-of-consciousness associations build layers of meaning throughout her poems, folding cultural references into the traumas of the speaker.

Powell is successful at writing long poems that extend for a few pages, as many of her poems do, often divided into sections. One such poem, “E-Diptych,” highlights the constructed narratives of online dating sites users as a means to create a digital identity for both themselves and their potential matches:

writes me, he makes me,

and when I make him, I write him.

We are invented, by the wanting

and not having of others.

Adding to her critique of the way people view online dating sites, Powell writes in the second section of this poem, “you live in this little box spread across / the screen of pixelated desires.” She builds on the loneliness of the dating site’s patrons who are disappointed when someone’s hair doesn’t actually match the photograph, and Powell plays with the truth and lies of these online profiles, despite the fact that the speaker does feel desperate and wants to find a lover and companion in many of her poems, including “Shulammite,” where the speaker swipes through photographs of potential dates on her phone, but finding someone honest is nearly impossible.

Powell elaborates on the power of odors in connection to memory as she moves into a series of poems focused on specific family history, such as “In Vilnius,” and poems about Vermont, including “Burlington Is Nuts Today” and “Lying Perfume Bottle of Chanel Pour Monsieur.” The latter poem begins with the sensual line, “tell me everything,’ he said” as if the reader has entered a romantic encounter of a man eager to learn about his new lover’s past. Powell continues with the statement that “odor is identity’s first ardor,” and later, “there’s something familiar / about the animalistic scent, the refined contradiction.” She concludes:

Fantasy is what we create when we have nothing

left to say about a world that has left us trendy,

fetishized, and empty. He researched me as an olfactory

how to turn moments into hyperrealism.

Powell’s criticism of some of the foundations of modern American culture are particularly acute, as she continues threading sensory details emphasizing scents that allow the reader to inhale each memory and moment. Powell sporadically includes ekphrastic responses that often include mentions of perfumes and atomizers as a means for women to assert their identity or achieve a particular purpose, as in “Judith Perfumes Herself,” after Judith Chicago’s Judith setting at The Dinner Party, whose “elegance of ritual” involves “behead[ing] Holofernes” while “bearing / her fragrant skin, newly perfumed, like a soul.” She emphasizes Judith’s power through her actions as well as her fragrance and its power of seduction.

Elaborating on her critique of dating culture, Powell makes fun of stationary exercise equipment, which has TV as “its only scenery” and “beeps phony miles and pretends hills,” seemingly gifted to the speaker so that she “won’t morph into your ex-wife instead of your trophy.”

Powell’s blunt, humorous explorations of American values, healthy lifestyles, as well as relationships and dating, keep each poem fresh and interesting as this collection builds and culminates.