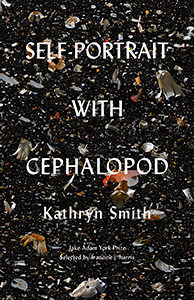 Kathryn Smith accomplishes a balance of mystery, hard truth, and lyrical sensibility in this volume whose poems teem with mammalian peculiarities (“our young feeding on us”) and oceanic transmutations (“intricate reefs of plastic / and dread.)” She sets out the syllabus on page one in “Ode to Super Friends and Nature Television” (from which the previous lines are quoted) by donning her “anthropocene coping mechanism,” a “cephalopod T-shirt,” and “ring.”

This is our first hint that we will need a dictionary and a heightened curiosity about the planet we live on to get us through the course. Why cephalopod? It’s a marine mollusk, with tentacles, large eyes, and a beak. It squirts ink as a defense mechanism. Wearing her “octopus shirt” and “pants the color of a sea cucumber,” the speaker in “Ode” calls to her superhero friends for help (“Wonder Twin powers, activate!”), because nothing is in her control. Or is it?

“On a planet poised for disaster,” our human reach is its destruction. The speaker’s “tentacles” may not be able to stop the hands that sign away our lands and waters to industrial disaster, but they can write poems. A poet’s “large eyes” are capable of taking in the whole picture and recording it in intricately damning detail. The “beak” of cephalopod poet is chitinous: tough, protective, semitransparent, the main component of arthropod exoskeletons, or, in this case, the poet’s tough outer shell. Smith speaks through her writing, “squirts ink” to defend the world she sees too well.

The entire collection is a marvel, a wonderment of how to live with such creatures of mystery as those in the sea and the soil, as well as those in human form. The quandary of our mortal existence in the anthropogenic age to which we are forever bound appears in poem after poem, line after line, alongside the creatures and the elements that bind us, as in “When I Stepped on the Mouth of Other Creatures, I Did Not Apologize”:

I consider it constantly,

in every cliff where roots strain to hang on,

every chamber spiraled with sand. First

the snail died, then the crab. I offer my finger

to the anemone’s blind suckle. I can’t

feed anything. The tide carries its living

and its dead together, lets the shore

reveal and retreat. When does the body

become distinct from the mind?

The narrator of sea and sand has journeyed home with creatures “cradled / in tissue,” only to discover the stench of death upon unwrapping her parcel. She realizes the inevitability of ocean tides and what they carry, which leads her to question the body/mind connection, how they flow together and when they might not.

These body/mind connections extend from creatures of the ocean to things of the garden. “Self-Portrait with Cephalopod and Digitalis Purpurea” begins with the narrator musing, “a girl doesn’t need a reason to place / a foxglove blossom on her tongue. It’s enough / to like the idea that the heart could stop because / of flowers.”

The heart of the girl and the poem is the narrator at an eighth-grade prom, dressed in a homemade gown with a ridiculous “seafoam bow,” her date leaving without her and ignoring her for the next four years of high school. It brings her to deeper considerations than the “risk” of trying to achieve beauty, or “knowing how little meets our expectations.”

Have you ever wondered

what’s beneath the skin, working? I know

so little, I wouldn’t recognize my own heart if I saw it

outside my body. I wouldn’t know my own bones

arranged in an ocean bed, an octopus coaxing

them to root in the sea floor until their stalks

In all these poems, questions of the universe are framed in questions of body and ocean, with a good measure of human history thrown in. Smith’s questioning nature honors the millennia of sciences that bring her to such poems as “Situs Inversus,” an eleven-part examination of what makes us mortal. It moves from physical placement of the heart to what it means aside from its pure physicality, in which it might have a spiritual companion, perhaps the soul.

I was considering the soul

and where it resides and whether

if the body’s functioning

or the gall bladder or the eyes,

is something the body

The speaker asks, “do you know where your heart is?” As a schoolgirl, she has dissected a squid “to know where among the tentacled mess / lay its center.” After class, the students fried it in a skillet. “It tasted like everything I didn’t know / about the world’s inner workings.” As Smith delves deeper into the workings of sea creatures and human creatures in this poem of science, history, and gastronomy, she brings us to the crux: “the heart isn’t shaped / like its symbol. The soul is a mystery.” Like the ocean, the body holds a secret knowledge. We still do not know all there is below the surface.

This deep questioning of human mortality takes up the fourth and final part of the collection. It builds from Part 1, where we get the wry social critic of the tech age who “implore[s] our screens to refresh” with some hard truths of current times in opposition to our biblical “Creation Myth,” looks askance at our old-fashioned take on “Dumb Beasts,” and pushes us beyond our “Job Qualifications” for living in a world where “There Are So Many Ways to Decide What to Kill and What to Rescue.”

Part 2 gives us spells, psalms, and parables, all slightly skewed for effect. “Spell to Turn the World Around” works like the superhero we met in the introductory poem, called to thwart tragedies that occur before the hero can don her powerful costume. She calls on her friends to “collect” all who are “battered / in the night by creatures bent on malice.”

In “Psalm Formula: Anti-Epistle,” humor vies with sarcasm for an all-too-knowing take on the anthropogenic age we live in.

I am fearfully and wonderfully

in the house of the Lord,

The psalms and parables section ends with “Meditation Among the Fragments,” with the speaker collecting “ancient litter” on the ocean’s shore. “[I]n such a vast / calcifying tumbler,” she asks, “who could keep / what’s necessary?” Understanding the fragility of “life / lived at the edges,” she feels the sand slip beneath her feet. “Let the tide, as it / will, draw in.”

The poet as activist has a mix of roles and obligations to fulfill. One of them, as Smith lays out so lyrically in Part 3, is to inform others of danger, not only dangers that await us by fate or accident, but dangers we bring on ourselves. Some of these are byproducts of technology, as in the poem “Sulfur,” about the invention of wood milling machinery to make paper, with its “belching / hell-stench.” Smith places “brimstone” next to “god,” turns “sulfurous air” into “white plumes,” trades “explosive powder” for “immortality,” and bathes the “byproduct of danger” in “healing waters.” Ironies are magnified in Smith’s poetics.

In a world heavily skewed to human existence, where industry and technology have tipped the planet to a place that feels entirely beyond our control, Smith’s poems call on our deeper senses of body/mind/soul as counterweights to the paradoxes of what science has wrought. These are poems of sorrow, yes, but also of marvel and wonderment. They ask us to honor mystery, to give up all we thought was possible and try on our new knowledge like a shield.