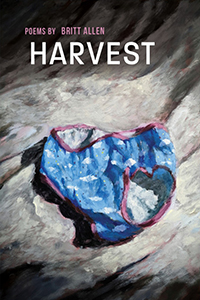 To bring to harvest is to plant, nurture, and sustain to ripeness, then reap the result of all that care. But the reaper in Britt Allen’s Harvest expects rewards beyond reason, beyond any ethical sensibility. He has reaped the soul of the young narrator through a brutal act that repeats and repeats, physically and psychically, upon the narrator and in varying degrees upon her family.

Allen tells the story from two perspectives, as an eleven-year-old whose stepfather abuses her sexually (and eventually abuses her siblings) with her mother’s knowledge (and denial), and as a young wife whose intimacy with her husband is compromised by the abuse and betrayal she suffered as a child and into adulthood. And yet, this is not a narrative of sorrow and waste but a work that carries its own fruitful harvest.

“[I]n the act of making a poem,” writes Gregory Orr in Poetry as Survival, “at least two crucial things have taken place that are different from ordinary life. First, we have shifted the crisis to a bearable distance from us: removed it to the symbolic but vivid world of language. Secondly, we have actively made and shaped this model of our situation rather than passively endured it as lived experience.”

With this collection of twenty-one poems, Allen shifts the crisis of her childhood to a narrator who relates each lived experience in vivid, excruciating detail, the language of poetry making raw truth bearable. The situation takes shape from the outset with “Harvest,” the introductory poem: “My family split up in the cornfield.” The narrator has “paired off” with her stepfather “in the maze.” The maze is symbolic for what follows, from the stepfather’s initial act of violence (“his stone hand reaped my chest” … “his cold erection pawing my spine”) to the mother’s inexplicable complicity: “Mom could have been an acre away / or doe-still behind the next stalk.”

To further shape the trajectory of parental transgression and betrayal, Allen crafts an erasure poem from a 1961 how-to guide, Life with Women. By taking one page from the now-archaic text and blackening all but a few stark words, she turns the survival guide on its head. The old cliché, “Can This Marriage Be Saved?” gets retitled, “Can this Marriage be Avoided?” Gleaned from its sixties' context, the “irresistible urge to mate” becomes a “horrendous transformation” wherein:

Fearing for her own life has corrupted the mother’s ability to stand up for her daughters. But the daughters are not the only ones affected by their mother’s unfortunate second marriage. Now we have the younger brother to consider:

to god I want to save him.

lie that lives inside

my mind I cannot raise my cry

My baby brother pissed himself

every night last week while

I slept between clean sheets

Titled “Selfish,” this poem seems to end in guilt and remorse for the narrator. Not so for the poet, who has shaped and reshaped the scene into art, performance-worthy, ready for the microphone. Allen is a talented reader of her work, with the confidence of artistic rigor and no small amount of therapy. She illustrates what Louise DeSalvo, in Writing as a Way of Healing, teaches about the process of writing, that if it is done right, “profound behavioral and emotional changes take place in the writer’s life. There is self-acceptance and expiation (of guilt, self-blame, self-hatred, and self-reproach.)”

It takes a while for the narrator to get through some of that self-recrimination as the poems move through varying effects of sexual abuse, including self-abuse, promiscuity, and loss of libido:

I am twenty-four and realize I’ve been

giving my life to the brutest bidder since

my stepfather fucked my childhood away.

If I married a man like my Daddy and got

him to mark me, I could win.

I have named my fear of men and quit

feeling for you all.

These “husband” poems, three of them titled “To My Husband,” make up almost half of the collection. One of them confesses the narrator’s obsession with proving her stepfather’s guilt:

He lifted the flap of my rose—

bud panties when I was eleven.

I still have the panties, bunched

At the bottom of a lingerie bag, proof.

Another husband poem brings in a therapist to conjure the narrator’s inner child:

to know he didn’t mean to hurt

her, not really, he knows girls

made of stone don’t bleed.

And another one falls back to self-disparagement, because as anyone in therapy knows, the stages of recovery are recursive:

This marriage is my fault.

With each hard look these poems take at what an abuser has wrought, the picture of a life beyond abuse gains more clarity. Allen has crafted a narrative that spares no reader from what needs to be told, a harvest of truth that moves inevitably toward hope and healing:

I raced home with

a berry on my fist

for you, a small

Over a backyard fence:

I will turn the ashes into snowflakes

The narrator’s resolve to make life better for herself and her family is the poet’s resolve. It comes from the work of reentering that place of trauma, looking deeply into its existence, and creating a “new story,” as the final poem, “Alaska,” does for the narrator and two her sisters:

There will be no fathers

For us, only love, only streams

With gold ribbon. The mountain

Will hold us to her earthen breast, all warm

And it is here that we find evidence of what DeSalvo promotes at the heart of her book: the “transformative qualities” of a healing narrative.” Britt Allen is destined to bring more of that harvest into the world.

Posted by Sugar House Review at 11:54 AM