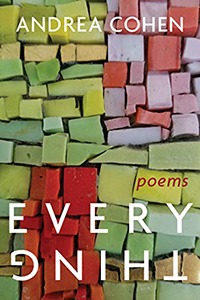 Some readers might remember the game show Name That Tune. The contestants would vie to identify a song given the fewest notes. They’d have to hear in those few hints a melody, lyrics, and a rush of associations. I often feel Andrea Cohen is challenging herself with similar limitations. The poems in Everything are short, sometimes really short like “Guide to Becoming a Human Shield”:

The poem is only three words, but does an enormous amount of work. In the first line, we get to the heart of the strategy posed by the title; you become a human shield first by surviving. You live through the danger. The next two lines expand the thought: you also have to live near the danger, near the spears. You have to be endangered to learn how to protect yourself. We leave the poem still thinking about the dangers the speaker may have faced, or those we ourselves have faced. The dangers in these poems include the deaths of loved ones and a romance. We also learn to survive in an unsafe world and address the spiritual through a Jewish lens. These poems live in dynamic tension: tiny and vast, funny and tragic, stated and unstated.

Like a hard-hitting joke, Cohen often has a set up and then a punchline that delivers, as in “Right as Rain”:

It’s funny to take on the cliche “right as rain,” especially in light of the flood. It’s funny to think of giraffes having an opinion on our common sayings. But this poem is heartbreaking because of the word “slowing,” the giraffes dragging their feet, not wanting to get on the ark and yet not safe to stay on land. There is no good choice here, and, in fact, they have no choice much like all the wild animals that have been corralled and controlled by humans. The poem starts with a small commentary on language and in thirteen words opens to a vast and tragic commentary on humanity and ecology.

Many of these poems explode and expand, a bit like koans, zen puzzles without a specific answer and meant to provoke enlightenment. Here is “Fellow Traveler”:

with an empty suitcase

You never know when

The reader has barely taken in the strangeness of traveling everywhere with an empty suitcase and the metaphoric implications that entails, loneliness, unfulfilled, hope for the future; when the poem switches not just rhetorical strategies, from narrative to aphorism, but from third person to second. The reader is now being addressed directly. The poem has gone from a problem someone else must deal with to your problem, your life.

But who is the fellow traveler? That’s the puzzle. On first reading, it seems to be the suitcase itself, but it also could be cultural baggage. It is part of my Jewish cultural heritage, one I share with Cohen, that you should be prepared to leave swiftly with nothing. Or, the fellow traveler could be God, the promise that a protective benevolence is with you on this journey. In 18 brief words, Cohen’s powers of expansiveness are on full display, shifting from the mundane to the metaphysical while effortlessly flipping the point of view and implicating the reader.

Many of these poems, especially in the first section, have a spiritual undercurrent. Even if the subject matter of the poem is as prosaic as a wrecking ball or getting a tattoo, Cohen invokes  the divine (“Desert Isle”) or the existential angst of being human (“Everything"). I’ve encountered few poets who are as capable of giving prominence to what is unsaid in the poems as they are to what is said. When in “Le Danton” the old poet sitting at the café on St. Germain says, “Tell me everything” to the sugar packets. I feel a lifetime of seeking underneath those lines, a soul crying out to the universe.

In “Openings” the speaker acknowledges that death will come, but she deflects and refocuses this inevitability with sassiness and celebration of the small beauty of a backlit pear tree:

Eternity has closed its doors—

backlit and the fruits I can’t get to.

Cohen’s poems are often both grounded in the real like the pear tree and stretch like its canopy into the philosophical. They are insightful and quick, delightful and powerful.

Deborah Bacharach is the author of Shake and Tremor (Grayson Books, 2021), and After I stop Lying (Cherry Grover Collections, 2015). She he has been published in Vallum, Poet Lore, and The Southampton Review among many other journals. She is a writing coach in Seattle. Find out more at DeborahBacharach.com.