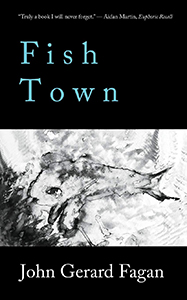 I’m of Japanese descent and moved to the UK as an infant, so I was intrigued by John Gerard Fagan’s new Scottish/Japanese poetic memoir Fish Town. Fagan is 29 years old and his life is in pieces in Glasgow, Scotland. He struggles to find a permanent job and is in a stagnant relationship. So, instead of continuing to tread water, he pawns his belongings, packs a suitcase, and moves over 5,000 miles away for a new life in Japan.

Fagan is not another Japanophile who loves everything about Japanese culture and indulges in extravagant nights out in Tokyo. Instead, Fish Town digs under the surface of both the country and the writer. It is Lost in Translation on a much larger scale.

The story is told in small chapters that lack punctuation. You feel like you are in that new world with Fagan as he struggles to create a new life for himself in a small fishing port that was once famous for tuna but is now a shadow of its former self. The poems pull you into the fishing village and the pace keeps you there. The opening chapter reveals the sense of loneliness that never quite goes away:

only the truly lost wash up on the shore of Yaizu

a fish town in a forgotten part of Japan

but that’s where I was

I expected Fish Town would be similar to other gaijin (foreigner) memoirs about their whacky experiences living in Japan, but this was far removed from those texts, and exceeded my expectations, both as a memoir and as a collection of poetry. It is realistic and raw, rather than sugar-coated and cute, as the chapter about his first neighbor in Yaizu titled "a fisherman next door" reveals:

It only got louder

I got used to sleeping with headphones in

Fagan’s minimalism is perfect for this kind of epic story as we feel blasts of summer heat, the rotten smells of the surrounding factories, and the blinding lights of Tokyo that draw him closer like a moth with damaged wings. It holds nothing back; the poems are vulnerable and emotional, but also have power. Nothing comes easy, but Fagan possesses determination and work ethic in abundance. The chapter titled "wounds" is a perfect example of his mindset as he lives in a tiny, rural apartment and wonders about the other foreigners he has met so far:

some people take their wounds to a foreign land

some place far far away

can be someone completely new

and takes over once more

foreign wounds don't heal in a place like Japan

they only get worse, fester, and bleed out

that's why most from the West don't last long

their experience should have been a week-long holiday

As we move through the story, Fagan’s life twists through both rural and urban Japan. He joins the metal band Far Beyond Demise, wins a contract with a semi-professional football team in Shizuoka City, and a chance meeting with a Japanese actress and her cat in Tokyo shapes the narrative, which spans seven years. It is heartbreaking at times as Fagan gets his life together only to see it unravel time and time again.

I should have seen it coming

there was a scratch of a feeling it would all sour

and run into dark drains

but I ignored it

until that scratch was a puss-filled wound with flies drinking on the surface.

Readers of Fante will find familiarity with this debut writer, though it has a distinctly Scottish feeling to it. It blends the loneliness of Into the Wild, the blinding pace of Papillon, and the honesty of The Heroin Diaries. You can feel the homesickness, despair, and sense of not belonging. The chapter "five more times" about missing his elderly parents struck a chord and brought home the complex repercussions of his move and attempts to start a new life:

and they lived to 70

I’d only see them five more times in my life

that thinking anchored me in the moment

I was too far away if I wanted that to change

At moments such as this, Fish Town left me speechless, thinking about my own life and choices. People like myself who are feeling lost and still looking to find their place in the world will relate to this collection. It is a compelling and original debut written from a unique perspective, in an idiosyncratic style. Much like the titles mentioned above, Fish Town has the makings of a cult classic.