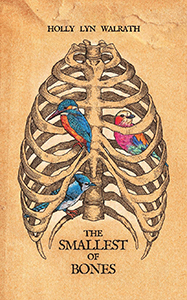 The Smallest of Bones

Our bones can tell someone everything about us—our occupation, our habits, our illnesses. Even when all the flesh has been stripped away, our bones can tell someone everything about who we were and how we lived. Holly Lyn Walrath uses human bones in her poetry to discuss issues of body and gender. “If you strip me down to my bones / am I yours?” the speaker asks in Walrath’s collection of dark poems, The Smallest of Bones, suggesting that when someone reveals their innermost layers, ownership by the observer is implied.

The book is in sections delineated by skeletal anatomy, such as the cranium, the mandible, the sternum, the sacrum, the spine, the calcaneus, and the temporal bone. Much like an anthropologist, Walrath uses the bones to demonstrate differences between men and women, exploring not only the physical, but the expectations and violence perpetrated against women. Of the mandible, Walrath says, “Fractures of this bone are the most common in cases of domestic violence. The fist is a favorite tool for assaults. The mandibles of the female of the species are smaller. Thinner. Rounder. More obtuse.” The poem shows how it is the female jawbone that is more susceptible to the violence of a physical assault.

Likewise, Walrath says of the spine: “Evolutionary psychology suggests that heterosexual men might be on the lookout for a very specific kind of spine in sexual partners. Are they looking for weakness or strength. Maybe we should stop looking for men as partners.” Her tone here is wry, weary; it’s an extreme that’s suggested, but the fact is, most women who are victims of murder or abuse are harmed by the men in their lives. The situation that exists in the world is an extreme in and of itself.

In addition to lyrical essays on bones, each section contains brief, luminous free verse poems that further explore the different themes linked to specific skeletal parts. These poems balance out the matter-of-fact nature of the essays. The poems are short, but are pared down to perfection. In one untitled poem, the speaker says, “your mouth tastes like chaos bourbon-sweet / harder than obsidian […] where the demon’s tongue is rough like a cat’s / how I strain against it.”

This piece is dark and alluring, drawing the reader into the world created within. It’s difficult to write such stripped-down poems. To say something in its entirety while simultaneously distilling it takes skill. The speaker says:

what is a demon anyway but a flushed girl

The paranormal aspect of this piece creates an interesting foil to the academic tone of the bone essays. It says that we are more than just the sum of our parts—there’s something deeper at play; something far more sinister and beautiful than just a body, existing. In other words, the body as a whole is an intelligent haunting.

Furthermore, the presence of the female demon brings out the shadow-side of femininity. Often, women are presented as smiling, pleasant, docile. However, that which is feminine can also be dark, powerful, angry. There is female strength that patriarchal norms would deny, and I love that this piece draws that out through the demon who can bring down a mountain with a single magic word.

In another poem, the speaker says, “there are few places left that man has not touched / we square cities, parks but long for wildness.” Here, the speaker is comparing a woman’s body to land. The parallel being made is indicating that men attempt to stake their claim on female bodies, just as they would the landscape. It’s been a common occurrence throughout history—men declared land for themselves, then built upon it. In a similar way, men staked their claim on the female body through marriage, through laws. They viewed women’s bodies much the same way they would the land they stood on. That is, they believed all they saw belonged to them without question.

The speaker in this poem says, “let us not assign / too much power / to the virgins // buildings have ghosts but so do trees.” Throughout history, men have praised women who are what they consider to be “pure.” They have praised women who do not seek knowledge and pleasure of themselves and their own bodies. In this piece, Walrath continues the idea of the haunted body—the beautiful, natural haunting of the female body—the body that seeks to know itself, separate from what she is told that she needs to be. The speaker says:

What is the price of water?

I sink myself in the river at dawn

your words are the stones

In continually regulating women’s bodies, men and politicians are saying we are not smart, capable, or important enough to lay claim to our own bodies, to speak for ourselves and make our own choices; they are saying men must do it for us. Walrath’s book is a testament to the idea that our bodies are our own. That we are more than just bodies, more than just minds, but whole and complete people with desires and choices.

In another untitled poem, the speaker talks about tearing off her breasts, an act symbolic of removing one’s womanhood. She says that:

when one member of a social group

considers itself a burden it may commit

until they have control

This second reference to drowning and self-destruction is a refrain throughout the book. One where the speaker drowns, becomes a corpse, then ash and bone.

Through the bones, Walrath indicates that there are differences in the way that female-identifying bodies manifest. She explores the relationship between the body and the metaphysical world, and how there’s more to the body than just what we can see.

Posted by Sugar House Review at 6:00 AM