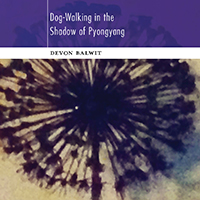 Dog-Walking in the Shadow of Pyongyang

Imagine watching a city burn. You’re far enough away from the blaze that you don’t hear the sirens. Everything plays out like a silent horror film. Then survivor’s guilt sets in:

… I know cars clog the roads

that would have changed everything.

That I thought them must be enough,

on steering wheels, willing my children,

the cat, the dog beyond the mayhem.

After the guilt comes denial when the mayhem is drowned out by “Bach spilling from the speakers” (from “Despite the Blaze”). These bizarre twists spill throughout Devon Balwit’s new poetry collection, Dog-Walking in the Shadow of Pyongyang.

The title has its own tale. If you know the history of Pyongyang—how that North Korean city was demolished and rebuilt, then devastated and revived again—you might think of it in two ways: 1) that it’s a city of misfortune or 2) that it’s a lesson in resilience. If we look at each poem through the first lens, one might think the speakers in this book are fools “dog-walking” themselves into one disastrous situation after the next. But I prefer the second view, which is an empowering one. In that sense, the characters populating Devon’s collection show the reader that—as the novelist Jodi Picoult once put it—“the human capacity for burden is like bamboo—far more flexible than you’d ever believe at first glance.”

You see that bamboo bend of a mother burdened by her son’s question: “Is the U.S. Ready for a Nuclear Threat?”—which is also the poem’s title. In that piece, the mom manages by learning “the poetry of defense, / the naming of the deadly arc—boost, / midcourse, terminal.” She uses humor as another way of coping:

one feels still able to veer. The latter third

is bad, but surely there are therapies,

intercepts to spare us impact.

Balwit’s use of that tone here speaks directly to what the actor/comedian Mel Brooks once said about humor, how it’s “just another defense against the universe.” Balwit’s speaker elaborates on that point:

the threat cloud. We know it well

from life, the way trouble comes

We see a similar threat cloud in the book’s opening poem, “Demeter of the Ex-Urb.” In this scene, the speaker is a grass flower sprouting where she’s not welcomed. The so-called “mistress of spathe, spikelet, glume / and peduncle” is confronted by Demeter, the goddess of agriculture. A standoff ensues, but the speaker stands her ground:

in a campaign of ripped roots …

The music of those lines intensifies the brawl with the alliteration (“stutter-stepping … flaring, fierce / … ripped roots”), popping like jabs, then the final blow: “me flailing the blunt trowel.” Poems like “Demeter of the Ex-Urb” and “Sarracenia, the Siren Singer” almost feel like trickster tales, where the protagonist uses their wits to survive. “Sarracenia” flips the predator-prey interaction:

… You come to me, all the while thinking it

to stumble on my fluted lips. It’s almost too easy.

With each conquest, I plump further. Waxing new traps.

What’s striking about this collection is Balwit’s ability to bring the reader into alternate realities, where they gain new insights. She does this in “East Egg,” a nod to F. Scott Fitzgerald’s The Great Gatsby. The speaker—a “wide-eyed ingénue”—is in a rendezvous with Tom Buchanan in the East Egg, or old money part of the river:

He invited me here, and I came, already wet,

Daisy laughs, knowing what he is beneath skin.

The last line of the second stanza almost reads like regret. This reader could imagine the speaker preparing for the walk of shame. That is until these lines:

Anything to shuck corset and slip

into a flappers’ insouciance, and, top down,

by my bedside. Anyone can fetch and obey.

Even briefly, I wanted claws.

That the speaker slips “into a flapper’s insouciance” makes the reader wonder who played who, who made whom “fetch and obey.” Then it becomes a poem about women’s sexual liberation, the speaker stacking her male conquests “like unread novels” by her bedside. That her lovers are unread novels could mean it’s not worth her time exploring something deeper within them. The speaker’s actions come with another kind of burden, especially in a society still policing women’s sexuality.

A reader might assume as much from the poem “Sad Night,” where the speaker and possibly-a-lover flee from their “burdens across the causeways of night” until the road disappears, or “has ghosted.” Balwit’s sensory imagery shows a desperate situation:

… We bring each other down,

then use the twisted limbs to keep above dark water.

If we survive till dawn, it is because we are guilty.

The final lines evoke the Salem witch trials in colonial Massachusetts in the late seventeenth century. During that time, mostly women were accused of practicing witchcraft for acting out of the norm. The speaker in “East Egg” would certainly fit the grand juries’ descriptions of someone acting witch-like for being “stubborn,” “strange,” or exhibiting “forward behavior.” Those characteristics might also apply to the speaker and her partner in “Sad Night.” Witch trial victims were tortured by devices like the ducking stool—what looked like a seesaw with a stool. The accused would sit on the seat that hung over a local pond. Their accuser, on the other end, would dunk them in the water. If the accused survived, they were considered a witch. If they drowned, they were innocent. Hence the lines: “If we survive till dawn, it is because we are guilty.” Other sensory details add to that allusion: “Ravens clack from purple-black hoods, eyes fierce / with knowing” or “newlyweds twisting bright rings about captive fingers.” One can’t help but wonder if the speaker and her partner are not supposed to be together, if their relationship goes against the norms of a city casting them out, where:

… We bruise beneath offal,

gag on the taste of iron. Grudgingly, dawn releases us

from where we sprawl in mud patterned by flailing.

That they love each other despite the consequences shows an attribute that the speakers in this collection have in common. They’re courageous enough to face their disasters head on—bruises and all—and emerge with a hero’s heart. After all, as Khalil Gibran put it, “the most massive characters are seared with scars.”

The most important lesson that comes out of Dog-Walking in the Shadow of Pyongyang is that we’re measured by our courage, even when we curse the journey. We see that with Devon’s speakers in the poem “What We Are”:

… We blame our childhood

or the rough journey, but it may just be

the way we were made. A tracery

of brick, a careless daubing. Neither side

matches, but we have learned to celebrate

imbalance, not to care when eyes

peer in between our slipped slats.

Let them look. Even clouds

pause overhead for a glimpse.

Posted by Sugar House Review at 6:00 AM