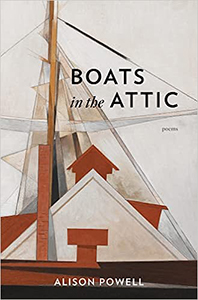 Boats in the Attic

Poetry for the End Times: Boats in the Attic

After more than two exhausting years of pandemic atop a daily procession of environmental catastrophe, social and economic turmoil, war, terrorism, and political upheaval (and those are just the morning headlines), it’s no surprise to find the word “apocalyptic” bandied about almost reflexively to describe our current state of affairs. And while this isn’t exactly breaking news—people have been living through terrible times since time began—somehow these days  manage to feel even worse than usual. In this context, there’s something incredibly refreshing about Alison Powell’s second collection, Boats in the Attic, published by Fordham University Press in fall 2022. Winner of the 2021 Poetic Justice Institute Editor’s Prize, the book not only inhabits our fraught contemporary space without getting bogged down in artistic doom-scrolling, but, more importantly, points a way forward for living when it feels like the End Times have arrived.

Boats in the Attic is divided into three sections, with a distinct pleasure in the balanced and confident way they unfold from one to the next. Thematically, much of the first section circles around the importance of naming and knowing as a means of connecting to the world. From Adam and Eve to middle-school journalism class, Powell evokes a primal and formative sense of exploration. In “Etymology: Heaven” the process of naming (and therefore knowing, or even possession) takes center stage: “Adam has a word for all— // even the beasts are given titles — / naming being the first form.” She returns to Adam and naming again in “Missing File #3: Panthera Leo Leo, Or, A Civics Lesson” with a more personal perspective:

Sometimes I think of naming as a paternal act: Adam sits, petting the animals

as they come to him, making of them the first little zoo. Other times, I think

naming is about disbelief, our lack of faith—that if we don’t have a word for

something, it won’t let us hold it anymore.

The second section turns this process of naming and knowing inward and includes poems exploring parenthood, such as “The Book of Revelation,” “After the Birth of the First Child” and “Upon Turning Forty.” The litany “If We Speak of the Hurricane” bursts at the seams with lyric energy, and the incantation of “if”—with its dual sense of doubt and possibility—provides a touchingly grown-up echo to a child’s incessant “why”:

if he is just a boy

asking about justice at the mall;

if his father and I cannot help but love

his locomotive of curiosity, its erratic perpetuity,

shark, shots, Mars, if we wonder how it will end;

if zoo doctor, if astronomer, if madman

The third section brings the internal and external worlds of experience together, making it clear that there isn’t really a binary between the two to begin with. In particular, the sprawling “Missing File #7: Nomen Nudum” tells about the discovery of a skeleton called “The Red Lady” by geologist, distinguished eater, and Oxford professor Rev. William Buckland in 1823. Along the way, the poem passes through summer camp memories, the Oxford English Dictionary’s definition of the word consume, a description of how Powell’s son “makes sense of death,” as well as what lab analysis in the 1950s actually discovered about the skeleton.

Boats in the Attic illuminates repeatedly how today’s default understanding of the word apocalypse—referring to disaster or fiery destruction—must be reconsidered. As Powell writes in “The First Word” near the start of the book: “The First Word // of the Book of Revelation / is apokalypsis // meaning unveiling.” More than a friendly linguistic clarification, this reads as a statement of intent, applicable to the entire collection. Poetry, to the extent that it’s meant to “do something,” is an act of unveiling and discovery that we as readers are invited to join.

One delightful part of this unveiling is a series of prose poems appearing over the course of the book. These “Missing File” pieces illuminate topics as diverse as Paleolithic art, honeybees, Aristotle’s History of Animals, middle school, Larry King, Transhumanism, cryonics, ortolans and birdsong, 19th century archeology, and much, much more. Taken together, the poems reflect a vision of the world that is deeply curious and intellectually expansive. An ample notes section references the factual bona fides behind the poems, but the poems themselves never come off as feeling strictly documentary. Furthermore, the prose poem form is an effective choice for these pieces, as it enables a clear presentation of ideas while showcasing Powell’s ironic wit and associative range. What we get is a personal voice, even as the poems foreground the weird and wondrous:

When I was a child, I licked manuka honey off the spoon when sick. I yanked handfuls of honeysuckle from the neighbor’s vine…Together the girl and I would  collect horse apples in the front yard and examine them carefully for caterpillars. We’d return at dusk to her house, with its one room just for the birds, carpeted in newspaper, branches anchored to the windows and extending all around. (from “Missing File #2: A Few Facts About Bees”)

At the heart of Boats in the Attic is the poem “The Book of Revelation,” an extended meditation on parenthood and the early years of the poet’s children. As with the “Missing File” poems, keen observation combined with approachable language helps convey a deeper sense of lived experience. Watching Powell observe her children opening up to the world around them, I found myself nodding in recognition of the many moments she describes, such as her son’s love of dinosaurs or when he ponders the mysteries of stars and planets from the backseat of a car.

But beyond the small wonders of domestic life, what I find most engaging about “The Book of Revelation” is its embodiment that parenthood isn’t the end of the world but only a beginning. We are left with a defusing and reframing of apocalypse, from destruction to discovery:

He that has an ear

let him hear it

I would fasten their small hearts

to my heart with reins

For now  let me watch

or a new religion

The title poem “Boats in the Attic,” which appears in the third section, highlights the possibilities of this new understanding of apocalypse. It begins in familiarly grim territory: “It had been so dry. Wildfires / blooming into a continent of ash.” But the poem shifts to a resounding note of optimism and revelation:

In the end, daughter, it was

the thing that was called for

years holy. You and me,

all the way to shore.

Here in a few short lines are all the reasons why we should keep coming back to Boats in the Attic: clear-eyed poetic vision, love, and the power of imagination enabling us to reach shore when the waters are stormy.

Yoni Hammer-Kossoy is a poet, translator, and educator, whose writing appears in numerous international journals and anthologies. A graduate of the Shaindy Rudoff program in creative writing at Bar Ilan University, he is the winner of the 2020 Andrea Moriah Prize in Poetry. Yoni is originally from Brooklyn, NY, and has been living in Israel with his family for more than 25 years.