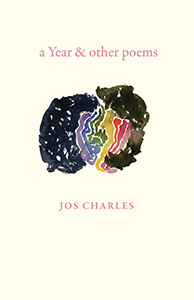 a Year & other poems

In her third poetry collection, a Year & other poems, Jos Charles explores time, environment, and longing through her lyric, expansive forms. As its title suggests, this collection is built around a long poem, “a Year,” which is divided into twelve sections named after each month. Several shorter poems open and close the collection. Charles’ poems frequently echo across time and space, yet the images in her poems root the reader in the speaker’s localized environment. These are poems that recognize the speaker’s dead in her present, and collective history in the materiality of our language.

& hear, I have heard, of inventories of

as if the first.

The speaker’s beloved you(s) haunt and echo throughout the collection, which Charles dedicated “for the lost—.” In the “January” section of “a Year,” Charles writes,

dead Naomi at the clinic

Leah in the hospice in bed

to the thresher a poet read

So much less than our

Charles’ short, image-heavy lines collapse the space between present observation and the remembered absence of the lost beloveds. In the beginning of “February” the speaker seems prompted to remembrance by rhyme: “heard a pool deflate / Monday you would be / twenty-eight.” Charles reminds us that the dead are always tied to our sense of time. The powerful effect of quiet remembrance, “Monday you would be / twenty-eight,” also recalls the everyday nature of grief.

Charles’ poems frequently give the reader a sense of rooted, localized time through her sharp, documenting images. The reader may feel that she too is walking past the “faded fence a pear / rot in the sun” and observing alongside the speaker. In “January,” Charles describes a woman on the beach:

to rock a woman rises

armful of color of

Charles creates effective images of these otherwise quotidian moments through her combination of careful sentences and the surprising, often energizing line breaks and rhythms that slow her reader and emphasize each detail of the unfolding image.

The smallness of many of her poems coupled with her informative use of white space allow readers to linger on these quiet images with the speaker. Charles begins “January” with an image-rooted landscape, “desert hills all / aflame.” She then allows the reader to step into the window and look through the screen at

an oak shook through a screen

in the same ascent  Months

I move in you

Charles’ frequent and carefully crafted use of white space lets her reader dwell in silence as well as language. Throughout this collection, Charles’ poems invite her reader to move a little slower, to listen longer, and to look.

The images in this collection often illustrate an intermingling between the self and her environment. The beginning of “July” might remind Charles’ reader of the opening of “January.” Six months later, California burns again:

a fire my mind

entirely a house of cinder in

a house of cinder

Charles’ forms and images often collapse the space between the speaker’s body and the images that compose her world. By bringing the fire into the speaker’s body, Charles powerfully reflects the significant, and increasingly damaging, relationship between our burning landscapes and ourselves.

Charles’ poems speak through an “I” that is continually conscious of and interacting with her past through language. In “March,” she writes:

The hour has an understory

I was a child pulling grass in the understory

dissembling until we met   When I’d

pull branch to ledge & sing all

The strange and powerful image of “one song / atop another” reflects the frequent stacking effect of many of Charles’ lines, as well as the present’s intimate relationship with the past. Charles’ poems create lyric space where the personal past is rendered present.

In “October,” Charles mingles the present with memory and myth to remarkable effect, showing the weight of cultural and historical memory on the self. She begins by asking, “& were you alive / last it rained”? The speaker then dips into a memory of “sisters ahead la la / they said if we could / la la no.” The speaker describes herself with a familiar image from myth, the Spartans hiding in the belly of the Trojan horse: “my brain la / a living horse wooden / soldiers in it.” In “December,” Charles writes,

now in the clearing   A tarp

chains the lot of our speech

Sunday no women washing at the washing

stones  The past is the only

the only mutable thing)

By blending the past and present through image and attentive line work, Charles’ poems begin to embody the powerful ways we carry the past, personal and collective, with us.

Charles’ poems are expansive in their language and forms, and gorgeously rendered. Reading these poems, I remembered May Swenson’s preface from Poems to Solve. Swenson describes how “a poem, read for the first time, can offer the same pleasure as opening a wrapped box. There is anticipation of untying an intriguing knot of words, of unloosing all their intimations like loops, of lifting out—as if from under cover—an unexpected idea or fresh sensation.” a Year & other poems is full of this “fresh sensation.” And like a box from myth, the contents expand far beyond their container. These poems are generally small on the page. They tread softly. And they create powerful lyric spaces in time where meaning lingers, echoes.

Millie Tullis is a poet and folklorist from northern Utah. She received an MFA from George Mason University in 2021 and is currently studying folklore at Utah State University. Her poetry has been published in Rock & Sling, Cimarron Review, Juked, Ninth Letter, and elsewhere. She is the editor-in-chief of Psaltery & Lyre, an online journal publishing literature at the intersection of faith and doubt. You can find her on twitter @millie_tullis.
Posted by Sugar House Review at 6:50 PM