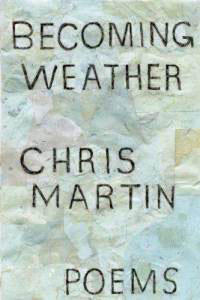 Chris Martin, in Becoming Weather, tracks between registers closely situated and theoretically distant, registers loosely coordinate with the particularly experienced the abstractly removed. Becoming Weather is significant in that it addresses the dual registers of human experience, the instant and the infinite, by poems which both contain and enact this duality. That is to say Martin manifests the dualism of Becoming Weather’s content by means of its tensioned form and vice versa. From Disequilibrium, the first section of Becoming Weather:

6
What we ask ourselves
Now is—What is forgivable?

I move to bare
the little splitting
inside as it

reds between
the pink on the end
of my finger

In 6, Martin attends to that which we ask ourselves and the pink on the end / of my finger, the abstract and critical and the close and experiential. In terms of content, the compositional field of the poem is marked. Extending from 6 to Becoming Weather as a whole, Martin’s pathos-rich poetic voice traces across the book a weave both local and global, highly personal and highly public. A sort of inscape is formed, but unlike Hopkins, Becoming Weather does not explicitly intend its instresses of poetic attention to some logocentric being or trope or combination of the two. Martin calls to the reader early in the text:

the divers tones
of a mental life meld

at once
So is it

the infinite or
the instantaneous

quality of movement
that frightens us more?

Martin marks his registers, instantaneous and infinite, and he situates his poetic voice in a differential position between them, between I and for whom, between subject and object. Martin’s vocation is to voice the inspired moments of his existence, to sing the correspondence between instance and infinity, between spots of time and high virtues, between epiphanies close at hand and the void beyond what is not at hand. Romantic and late-romantic poetics are applicable to Martin’s poems, but fail to account for the formal signature of Martin’s subject/object position. Thus Martin is set with the task of both seeing and saying:

8
Can I say the air
is beautiful?

Can I spend my whole life
as a guest inside the eccentric
balloon?
Let us release
these appearances
and in so

Can I spend my whole life as a gust
outside the eccentric balloon?

Can I see the air
as beautiful?

A follow-up question to stanza 2 could be: if not a speaking subject, then what? By inverting the opening couplet into the closing couplet, saying and seeing bind together in chiasm; Martin demonstrates the two acts’ integral interrelationship in the formation of the speaking subject. For Martin the poet must attend to both inside and outside, must attempt both saying and seeing. But how can one do both, how can someone be both inside and outside? In order to manage this duality, an ethics of instability (see Ted Mathys’s interview with Martin, soon to appear on coffeehousepress.org) is practically entailed and a poetics that privileges movement between registers is deployed. Across the poem and the book Martin flickers (and he must) between subjectivity and objectivity, the instant and the infinite in order to attempt both. Martin’s poetic voice tends towards a reflection of something essentially dualistic by function of its demonstrated vocation as well as its chosen subject. In this way, Becoming Weather is a rich working out of Martin’s poetics, a poetic vocation dually composite of a self-declared and content-determined set of imperatives.

None of this is to suggest that Martin aims for the expression of an imagined algorithm of nature—though the moment that one of Martin’s poems seems to alight on a mimetic perch, it just as quickly veers away. But this figure happens less in the way a finch flits instinctively about and more in the way a deliberately composed loop is shaken out from a lariat. Accordingly, as often as the poems of Becoming Weatherappear to manifest themselves, Martin clearly composes them.

Both contingency and composition hold places of privilege in Martin’s poetics. InBecoming Weather, perceptions follow one another quickly, but simultaneously Martin affects a subtle, tense chord between an emphasis on the open field and the particulars brought to position in that field. This tension is reflected in the poems’ movements between registers concrete and abstract. Across the book, Martin achieves the radical Disequilibrium he sets out to enact. Martin both sings, to borrow more terms from Charles Olson, from a position of objectism, and sees from a position of objectivism. Though at times the work tips too far towards it theoretical ground, threatening to topple irrecoverably into the discourses of critical thought, it does not. Thus the work achieves through form an enactment of its own content, and it does so in the pathos-rich timbre of Martin’s poetic voice. Martin’s poetic inheritances are in this way clearly present in the book’s figures (Oppen, Guest, and Berrigan are mentioned the book’s last section, Chorus); the book presents a flush document of Martin’s movement into a deeply dual poetics from a position informed by late modern poetry.
Posted by Sugar House Review at 10:46 PM