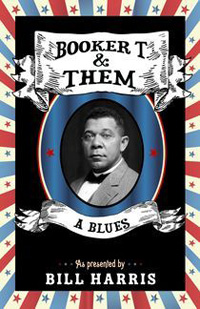 Booker T. and Them: A Blues by Bill Harris
(Wayne State University Press, 2012)

With its cover festooned in banners and patriotically bordered in stars and stripes, Bill Harris’ Booker T. & Them: A Blues promises a manifesto about Booker T. Washington’s uncanny knack for working across political factions to redefine race relations. It’s no surprise that the collection’s cover copy designates it a “bio-poem” about Booker T. Washington (1856-1915) which is akin to claiming that Disneyworld is a monument dedicated to Walt Disney, instead of a celebration of creative minds orbiting Disney’s sphere of influence. More accurately, Booker T. & Them studies an era, “Booker T. Washington Time. / [. . .] from 1881 to 1915,” and Booker T.’s position between black activists and the racist, white establishment. To represent this collusion, Bill Harris has melded poetry, blues, historical quotations, and commentahry into a lyric social history that should be shelved alongside Howard Zinn and David McCullough. Harris’ scrutiny applies not just to Booker T., but also to pugilist Jack Johnson, W.E.B. Du Bois, President Teddy Roosevelt, Mark Twain, Thomas Alva Edison, Jack London, and others. Harris’ dramatis personae perform the scope of African American travails and inequality, progressing beyond history á la Zinn, McCullough, and company, who pin social woes to class struggle. Yet despite Booker T.’s efforts and the awareness Harris’ lyric history generates, equality remains unattained:  “& still,” Harris reminds us, “it is a tough time for negroes.”

Harris writes that his “interest [. . .] is the depiction, in historical and imaginative ways, of several figures, with the emphasis on black males in the process of seeking to be men who mattered in racist America.”  Harris culls quotes from speeches and writings of the period’s powerbrokers, and his play with these textual artifacts performs, like Booker T. himself, a negotiation between the era’s racism and African Americans’ needs. But Harris strangely tamps down the quotations’ gravity with a tendency to hammer in definitions or data in a “Who’s Who?” format. In the collection’s opening chapter, this technique cudgels Thomas Alva Edison:

The authorial insertion about tinkering and business renders Edison’s own utterance redundant, diluting this moment’s irony. Harris could have armed himself with Edison’s verbal firepower and shot the inventor down with his own artillery. Edison’s claim that work is fun and games is anathema to the men and women Booker T. represents. Harris’ indexing technique also pares potential away from some provocative moments, such as when a senior at Booker T.’s Tuskegee Institute recollects a visit from William Howard Taft and Andrew Carnegie:

Harris’ imagined Tuskegee student might have judged these men and their attributes’ insinuations—instead of blandly recounting Taft’s girth or the paradox of Carnegie’s lack of education-cum-surfeit of wealth. Harris inters the only hint of judgment in a possible pun. “[S]tumpy Andrew / Carnegie” may refer to more than the steel baron’s height. Reading generously into this, the student might view Carnegie as stumping for Taft’s Republican values and, ergo, white prejudices.

Harris’ indexing technique, as well as many interspersed dictionary-style definitions, are questionable recurring structures in this blues for Booker T., especially when we hear Harris’ evocatively jagged line breaks and his riffs of figurative language. The harsh enjambment rollicks this book along, the breaks splintering names, dates, thoughts, and conjectures. Because Harris fragments this data, the poem lulls the reader into a sixteenth-note-sized pause, just enough quiet to reflect on the hatred that whitewashed history conveniently neglects. Harris’ enjambment even dismantles Jack London, that celebrated figure of tough realism, and his derision of African American pugilist Jack Johnson. London is a

Bastard, partially raised by an ex-slave; pseudo-
socialist son of an off-kilter suicidal
mother who channels a Native American
spirit [. . .]

That “pseudo-” insinuates that London has little time for his own biography, factoids that could challenge his notions of white supremacy. The line break opens the line—and us—for that takeaway, which reverberates into the following line:  London’s a bad socialist, from unstable stock. Harris salvages this bit from the annals of petty, campaign advert character attacks by, naturally, summoning London’s writing on white supremacy:

“[. . .] there is a certain
integrity, a sternness of conscience, a
melancholy responsibility of life,
a sympathy and comradeship and warm human feel,
which is ours, indubitably ours . . .”

Harris’ London has cast his intellectual rod to fish for the right abstraction, but to no avail:  the enjambment has shaken any belief a reader might have placed in London’s integrity. (Besides, Jack Johnson knocked out London’s “Great White Hope” prizefighter, Tommy Burns.)

Yet, it is Harris’ figurative language that offers the most scathing assessment of Booker T.’s epoch, as his diction creates historical, mythological, and cultural allusions. Repeated references to faces rewind us to the Roman Janus, the two-faced deity who gazes into the past and the future simultaneously. Harris hints at this in Booker T.’s initial meeting with Teddy Roosevelt, when the prior is “[s]howing his full face duplicity”—an impossible feat, since Booker T.’s middleman status (as a moderate and as a former slave) forces him to gaze toward an equal future yet backward toward slavery. Even the student at Tuskegee (who was strangely maladroit at criticizing Taft and Carnegie) recognizes how these dual facets bind Booker T.:

the different faces Washington dons for each [white guest]
[. . .]
What face would our principal wear if Champion Jack [Johnson]
came?—not that he’d be invited, not that he’d accept.

Booker T.’s faces weaken his sway with such figures as the student, Jack Johnson or W.E.B. Du Bois, because they recognize putting on the most appeasing visage as a political tactic and a weakness. This one-faced versus two-faced distinction transforms into symbolic shorthand for one-faced ideological stalwarts (both for good and for ill) and those Janus-faced men, like Booker T., muddled between incompatible visions for humanity.

Fortunately, the repeating images don’t receive the same blunderbuss as the indexing gimmick, as Harris dispatches deft similes and metaphors to telegraph the underlying themes of racial tension. For instance, Booker T., en route to Tuskegee, deems a stifling steam locomotive “suffocating as the mine,” the simile a reminder of blacks’ weary and often-calamitous physical labor. Likewise, in an interlude set during a Macon County, Alabama, lynching, the victim surveys the crowd from the gallows and sees “[s]moke, a curtain, thick as ginned cotton.”  This “ginned cotton” simile summons Eli Whitney’s cotton gin, an invention that accelerated King Cotton but subjected slaves to the caprice of white taskmasters; the lynch mob is the ruthless shadow of those cruel overseers and plantation life. We can detect a tiered symbolism, if we connect Whitney’s timesaving device to Edison’s claim about work equaling fun:  racist whites see no evil, because only blacks suffer the fatal consequences. After hanging this nameless black man, the mob gathers its weapons and its “[c]hained hounds, panting” a subtle metaphor for racism’s perpetuation of cruelty. Here, even Booker T. is told to “[l]ay low.”

The figurative language inoculates us against any chance of missing Harris’ point:  “& still it was a tough time for negroes.”  Yet, Harris yearns for Booker T. and Them to stand as an object lesson, a scholarly yet lyrical challenge to blanched History Channel-grade accounts of turn-of-the-century America. So, concluding this collection, Harris has compiled a few “After Words,” including W.E.B. Du Bois’s lament in “Black Reconstruction in America”:  “One is astonished in the study of history at the recurrence of the idea that evil must be forgotten, distorted, skimmed over. [. . .]  The difficulty [. . .] with this philosophy is that history loses its value as an incentive and example.”  These “After Words”—the book’s last pages—are rather late-game announcements of Booker T. & Them’s mission, but we receive the book’s raison d’être:  if we remain ignorant of historical evils and human rights violations, the powers that be shall perpetuate those atrocities. Bill Harris’ lyric social history reminds us that history, freed from sanitizing re-writes, can offer a liberating education in principles and perspectives.