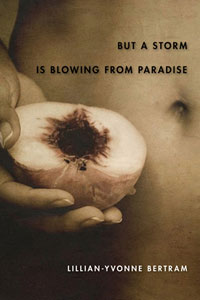 But a Storm is Blowing from Paradise by Lillian-Yvonne Bertram
(Red Hen Press, 2012)

“We will learn / more about the cosmos then apply / that knowledge to the arts,” promises Lillian-Yvonne Bertram in her poem “The New Thing,” succinctly articulating the strategy at work throughout her first book, the deft and confident But a Storm is Blowing from Paradise. Many poets these days want to bring the natural sciences to poetry, but Bertram does it with rare finesse and real beauty; instead of clinical mimesis or grotesquery, Bertram delivers what she promises, putting the mysteries of physics and chemistry in service of her own expression of an American reality. And the America she presents is one not only of coyotes, elk, and starlight, not only of cornfields, highways, and 4-H fairs, but also one of racism, misogyny, poverty, and courage.

Bertram is good with language—very good. She is a master of the one-shot, the atmospheric Polaroid of phrase, with lines like, “chuckle-colored barns,” “deer-white light,” “my heart’s blackening egg,” and “the devil in his hide of night.” She deals, too, in the economy of hurt, as in “the julienne I make of my thumb and peppers,” “January’s frigid waistcoat / slinging my belly,” or the horrifying epithet, “nigger piglet,” hurled at a young woman on her way home from the late-shift. Perhaps most powerful is when Bertram combines extra-distilled images with the wry tone of her most frequent speaker, the one who can scoff, “Them and their silky vaginas,” who suggests you “uncostume. And I don’t mean / in the swanlike way,” and who muses ruefully on “dark matters of design: those particulates causing all the trouble.” The spare but gorgeous “Circles in the Sky” (“I want to want / to tell you / about dakota”), the tender “Golfing in the Dark with Old Man Heart” (“dirts of the prairie fly from us”), and the title poem (possessed of too many great lines to choose one) are some of the best in a very strong collection.

Sometimes, though, Bertram’s commitment to the pliability of language gets the better of her. Poems like “Behind the Christian Door” (composed only of repeated iterations of the phrase, “And when is the state gonna pay us?”), the overly mathematical “Queen City Fractal,” or “Hinterland Ham Radio Signals,” which includes entire column-inches of “jettajettajettajetta,” become self-consciously experimental to a degree that feels like posturing, a hipster-acrobatics that makes Bertram seem more like other (weaker) poets and less like herself. The diagram that bursts into the otherwise fantastic “The Science of Heart” does more harm than good.

Another snag concerns the title, which borrows a famous phrase from the German-Jewish philosopher Walter Benjamin (1892-1941). Bertram’s book is so deeply rooted in the American West that nothing of Benjamin (or of Paul Klee’s painting, “Angelus Novus,” which inspired the passage) expresses itself in the collection; and though Bertram is vigilant about attributing her wide-ranging allusions, it’s Benjamin who gets the prime spot, despite his absence from the book at large.

Deliberate or not, this move allows Bertram to wink at those of us who know the Benjamin essay, while letting unfamiliar readers attribute all the mystery and pain and magic in that line to Bertram herself, as Steve Davenport does in his blurb for the book (“What’s a storm doing in Paradise . . . And why’s it blowing this way? I blame Bertram”). This is problematic, not least because it participates in the wide-scale appropriation of a man who suffered humiliation and hardship only to become, after his death, a kind of saint of postmodernity. It is acute because one of the things Bertram does is talk about a marginalized, invisible underclass—a status to which Benjamin, who committed suicide in flight from Vichy France, found himself relegated in the Europe of his time.

I raise this complaint in admiration for the book and for Bertram, who seems about to leap into relief as a poetic voice of real national importance. Judging from the Tupelo Press website, where her name appears frequently as a contest finalist, Bertram has at least three more collections nearly ready to release into the world. If she is to become one of our next great American poets, I hope she will extend to her influences the same care, sympathy and precision she has for language itself—the care, sympathy and precision that allows her to confide so beautifully in the collection’s opening poem that “All planets but this one were named after gods.” I look forward to more worlds of her crafting.
Posted by Sugar House Review at 8:57 PM