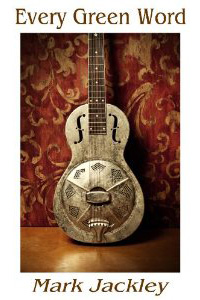 Mark Jackley’s concise, free-verse poems keep their aesthetic distance from the reader. They’ve outlived the vain and youthful need to be heard. Independent of assumptions, they seem sanguine without being slight; learned without being preachy. They are uninterested in whether or not you care for their quality—a quality that distinguishes itself within the field of contemporary poetry by dramatizing, not the rock colliding with the water, but the concentric ripples afterward. But Jackley’s brevity excludes neither awe nor dread. These poems employ the images and the fictions they need to reveal the truth. And the truth is whatever guides us through the dark.

In the end,
we are villagers.
There is magic and a wolf.

In this poem, “At the Hospice’,” the fairy-tale motif lends the final-line the weight of closure: we hear a heavy oak door click shut. But we were invited in before we left: the speaker includes the readers in the village. The wolf is the woman. And the magic is the transformation of her coffee whose steam, like the light of a torch, is her guide. By her persistence, we witness the woman lift herself from her animal nature into the light of compassion. She projects onto her cup of coffee the need for something to help pull her, or help her pull others, through that final threshold of death. Whether a patient or a worker, she either helps people die or is dying herself. It doesn’t matter which. Jackley has mythologized coffee, which is slightly comical—all good myths make us laugh—but valuable and true.

When a poet delivers a comedic and tragic poem in six lines, technique is in charge. Heaney made the distinction between technique and craft in his essay “Feelings into Words.” Craft merely translates thoughts into words, whereas Technique translates feelings into thoughts. The latter is where the best poems in Every Green Word dwell: down below, in the hinterland, occasionally bobbing up above the waters of the unconscious, revealing themselves to be globes of dream-stuff, soft and weighty, buoyantly resting on their true fictions, as in “Kentucky Lush”:

Bourbon floods the curving
two-lane of the tongue.

The moment stretched like red-wing
blackbird tules, we are

Because the metaphor is poetry’s, the reprieve of self-forgetting—as a major function of art—is praised in six cerebral but concrete lines. This poem owes homage to Baudelaire’s ‘Be Drunk.’ And how deft that first couplet: a line of iambic pentameter—its first foot a trochee, its final an anapest—split in two. On the other hand, the poems that dwell in craft, strangely enough, shoot a straight and sober look at objects, events, or psychological states, without making a high or symbolic leap. They rest on image and tone. Sometimes they try to be technique poems and don’t make the cut. Whether it’s a urinal or a motel room, they ride on a fact of experience, not a genuine deception. Of this batch, the best are love poems, and they rival the poems informed by Technique. Magnifying heartache, pain, and regret, they do not look for agreement or sympathy from the reader. They assert themselves, step off the stage, and let the echo of their words work on you. Not green, but middle-aged, they seize love knowing its wrack and ruin. And yet they remain sweet, smart, and sensitive to their own implications. Their speakers have tasted the hard fact that shows through in a spouse after a few years of marriage, when the fantasy of goodness and beauty is stripped. They do not affirm love from the platform of one who is addicted to that early fog of falling, but the later drought, when daily duties rise and nearly claw one into a machine. But these poems go even further: they know the only thing preventing that final transformation into a robot is companionship tethered by kindness. Without compassion, they say, love fails. The sweetest and funniest of these poems is “Vow.” Like some of the best free-verse poems, it is a list guided by a narrative. A candid poem polished with humor, it is a watermark not only of Jackley’s craft, but also of our culture’s domestic life.

If you, Kim, take me to be
your lawfully wedded guy
and in your loving arms
take all my baggage, like
marriages one and two, the tales
of wine tossed down and dishes
flung, of breaking hearts
at 4 a.m. and lawyers
and their bill — my god, their bills —
if you will take my failing
eyes, weak knees and everything
that sags, my daughter too,
her pre-teen sass, the brutal fact
we’ll be pushing sixty
when she goes to college,
if you will take my punk rock
and my scraggly beard,
placing them alongside
your Tim McGraw CD’s,
your Alabama Christian
faith and tidy spice rack,
your perfect penmanship,
oh honey, if you will,
I will do the dishes

Every Green Word’s epigraph states this book is for no one in particular. A humble statement. The delight in these poems rests on their wisdom, which is knowledge derived from experience. It’s easy, and perhaps fashionable, to toss a fat rock and make a loud splash; but if you come to poetry, not for noise or disrupting splatter, but for reflection in the waters of your mind, then this book is for you.
Posted by Sugar House Review at 6:23 PM