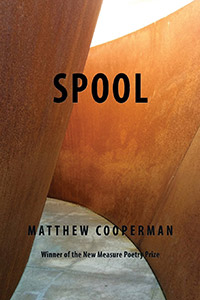 Matthew Cooperman’s fifth full-length book, Spool, is—to borrow from his own ample word-hoard—ampulacious. This generous collection of spare and insistent poems both contains itself and spills over in ways the reader comes to crave: book as amphora, as sealed barrel of hypodermic needle, or even as bomb, which, according to an earlier work of the poet, “is ampulacious, fully round, goes off remaining a spread object and a startling awareness.” (Jars, barrels, hoops—the cooper who bends and mends them. Under the spell of this cooper-man’s language, I’m newly attuned to roots.) The thread thrives.

From its opening lines, Cooperman’s book reels the reader into a space that is recognizably lyric, yet also—and on principle—opposed to what Anne Waldman calls the “identity kit” we poets drag around with us. Through an extraordinarily sure touch, Cooperman mixes pastoral and “post pastoral,” love poem and elegy, abstraction and intimate detail drawn from a life, whosever it may be.  The opening stanza reads:

Like a musician who works with implied overtones, Cooperman tricks the reader’s ear trained by ad-speak. Not money, but honey; not gain, but pain; not all along, but all alone. Elsewhere the “author was hard / of herding he,” and meaning becomes moaning. The unsounded syllables resonate. By the end of the first page, we hear the click of the cuffs lock, we feel this poet’s drive

This clock recurs through the book, as does the red balloon, time as viscous as the substance in the (breakable) beaker, as buoyant as the gas in the (puncturable) bag. We watch the words morph in the last lines of this first section, “this is the / wrist to save / risk of hive.” We factor danger and pain into the sweet industry before us.

Without exception, every poem in the book is composed of three-word lines; variations play out through layout and, occasionally, typography. This supple form recalls Williams, Olson, and Creeley, and yet Cooperman’s verse is constrained beyond even these models at their most rigorously experimental. In respect to form, Olson’s presence is palpable. I can easily imagine teaching Cooperman’s book as an exploration of Olson’s “composition by field,” whereby energy is built up and discharged as each line trips the next:

rhyme you say
a true blue
next life think.

Behind or around or through the buzz and spark of the lines are further layers: at bottom, a drone or sustain or what in jazz is called the pedal tone, and the overlay of a steady thrum—heart, heat, hearth.

There are many ways into the book: Milton, Shakespeare, Hopkins, Dickinson, Marvell, Bly, Duncan, Revell are named in the notes. But in my most recent reading, Williams and Creeley (not named, but everywhere present) are importantly and, as Creeley and Cooperman might say, complexly felt. The reverberations happen around particular words and situations, snatches of dialogue (“’drive,’ she said / ‘drive it fast. . .’”), and in the relation of poet to his subject. The opening lines of Paterson, Book II hover:

Outside
outside myself
there is a world,
he rumbled, subject to my incursions
a—a world
(to me) at rest,
which I approach
concretely—

Cooperman’s incursions, too, bring us along with him into and up hard against “the dredge of / city rivers,” mountains, and “vanishing woods”:

Most often, however, Cooperman is after something smaller—that basic human unit, “the family bin,” in its “wild domesticity”: “a family is / a thing a / made thing almost / a true wall / we made this / thing true wall.”  We watch the mind at work on “blood and cradle.” “Spool 7” begins: “some more new / thinking about about / and while I’m / at it on / and through the / time of conflicting,” doing a metacognitive dance that descends into body: “the body thirsts / the pupil dilates.”

But embodiment is hardly a solution to the problems of self that are hatched in this “family linkage nest.” This poet is tender with his intimates and harsh on himself, admitting he’s “a man unplumbed” (48), “placeless / among empty loans” (47): “how I am / this difficult man / a gnarled me” (28).  Again and again, the poet finds his limits, the silences without and within. The word “autism” drops once in the book, and reverberates, bone by bone, in association with “Daughter.” We witness the toil of being the father who “know[s] not / where she goes / or how to / go to her / with articulate grace”:

The wonder of the invariable, three-word rule is that at times it propels the poem forward, feeding off resistance; while, elsewhere, the effect is a stall or heart-rending stutter: “it’s confronting what / I don’t know / what I do.” The radiant “Spool 25” contains a prayer: “patience please please / dark dark understanding.”

Then there are, of course, the spools themselves—in the names of the individual poems (numbered randomly, nonconsecutively) and in the web of countless related figures: “lathe of time / lave of shine” and “world’s quick spindle / turns coriolis hairwise.” While the three-word lines give a transverse rhythm to the eye’s movement from left to right, and back again to left margin, this work is less about warp and weft than edge and fray. Spool catches the thread of its forebears: “If you could just ravel out into time. That would be nice. It would be nice if you could just ravel out into time,” says Darl in As I Lay Dying; “What common language to unravel,” asks Williams parenthetically in Paterson; and Cooperman follows with “she and me / a raveling spore / in every darkness.” While Faulkner and Williams cast their taut lines for the biggest fish, Cooperman favors coil, tangle, that which both binds and severs. The possibilities that open out from his title immeasurably extend Olson’s crude use of “kinetics” to illustrate the “machinery” of projective verse. We are ushered by Cooperman via modernist forms into new relations to time and space where “years go by / not as catches / but as drones.” He asks elsewhere, “is it we’re / free from the / surveillance when we / made the surveillance.” The effect of Cooperman’s anachronism is at once as familiar as a quilt, and vertiginous.

And yet, Cooperman rows us steadily with his “vacant oar,” paying out the tilting arcs of language that lash us to our objects, and cut between us and everything we aim at or converse with. Richard Serra presides over the book perhaps more than even the most influential poet. Cooperman offers the sculptor “a string of gratitudes,” calling him the “hovering ‘architect’ of the Spool design.” Cooperman’s book confirms my sense that poetry and sculpture are the closest cousins of the expressive arts, sharing our obsessions with objects and their making; with substance, medium, and material; with the primitive relations between nouns and verbs. Perhaps in a moment of overstatement, Serra traces all of his work to a single detail from an outing he took with his father when he was four years old. Serra recalls the “tremendous anxiety” he felt as he watched an oiler launched in the San Francisco Bay: “as the ship went through a transformation from an enormous obdurate weight to a buoyant structure, free, afloat, and adrift.” Cooperman spins a parallel moment, speaking as father rather than son, and supplementing memory with what he observes and what he hopes for:

An aching joy seeps through every line of this hard-won book. Cooperman ends “Spool 20” with a sigh, “so hard to / make real objects.” For my honey, the heft and breath of this book is as real as it gets.