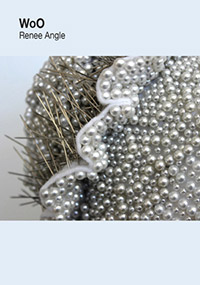 Renee Angle wastes no time in laying out the premise of her first collection, WoO. Its preface opens with the declaration “I am the bastard great-great-great grandchild of Joseph Smith, in search of a textline, not a bloodline. I affirm the manner in which durability and transience are imposed upon the world of objects.” This is a far cry from the traditional Mormon testimonial of “I know The Church is true; I know The Book of Mormon is true; I know ___________   is a prophet of God.” Nonetheless, it serves a similar purpose, a means of delineating one’s place within, or in this case without, a tradition that is at once familial, cultural, and literary. For followers of The Church of Jesus Christ of Latter Day Saints, this triangulation of identity, particularly for those of its early, pioneer stock, is every bit as crucial as the Father, Son, and Holy Ghost. After all, it is The Book of Mormon, with its companion texts The Doctrine and Covenants and The Pearl of Great Price, that differentiates Mormonism from other Christian faiths.

Needless to say, any prophet who brings forth a work subtitled “Another Testament of Jesus Christ” is bound to stir a little controversy. Smith’s book, along with his political and sexual proclivities, cost him dearly. It is within this context that Angle adds her own contribution to the literary tradition started by Smith, a book she calls “a hagiography written under the spiritual guide of a heretic.” Ostensibly, WoO is a translation of the missing 116 pages of The Book of Mormon, pages Smith translated from gold plates provided by an angel and which he then allowed his scribe, Martin Harris, to borrow to show his wife and friends in order to legitimate his plans to finance Smith’s publication. For Angle, it is clear that her interest in these pages is an exploration of creation, not divination. The pages are

Archeological syntax. Real estate hides behind Moroni’s
etymology. I want to tell you want it means. Want to
know what it means? But language is a skin, a mouth
for wearing. Language is a kin to kinder flophouses […]

Angle’s lines are slippery and charismatic. It is easy to read right through the syntactic shifts and play and difficult to forget their idiosyncrasies once they are observed. Smith, though not especially literate, understood this characteristic of language. When the missing pages did not resurface, he understood the scrutiny he would face if he and Harris were to recreate them and the two sets of revelations were not identical. After the rest of the book was finished Smith provided a condensed version of the 116 pages, also via revelation. Such fears of scrutiny resound throughout Angle’s work, perhaps most strongly with the question, “What happens when you hand your relics over to science, and, what if science doesn’t want your saints?” Or, perhaps more pointedly,

A crater muffled in the ruse. How ruseful to believe your
own ruse. Bake it up, chamber desert […]

WoO is a textline made by one alienated by Smith’s legacy, ostracized by its patriarchy and made a bastard both in the literal sense—as a product of an implied sexual encounter between her ancestor and Joseph Smith that was outside of traditional marriage or the spiritual marriage (polygamy) that was integral to Smith’s church—and figuratively in that Angle writes as a non-believer outside the LDS Church’s sanctioned, faith-promoting works. Her speaker is:

While much of the book takes places in domestic settings, women are never named and rarely characterized beyond mothers, wives, a means to kin.

In any given story, who is the fake? Is it the mother
That does not protest enough and therefore fails to
Protect her daughter from the lies of the father? Is it
her father who we are not sure is lying in the first place?
Is it the daughter herself, who could never know what
Her real interests are, or what is set before her each
morning?

There is a looming acquiescence and timidity to the women that speak to both their place within this tradition and the power inherent to Angle appropriating the keystone creative achievements of its founder. That said, it seems clear she counted herself among the LDS numbers at one time:

I was happy to flip shadows on hinges. Now I can’t
look at a shadow without him. I erase a set of out-of-tune
church bells, parking lot full of police cars.

Angle confronts both the history the LDS church extols for the public and its membership, as well as the complexity that constitutes its much larger historical record. There is an idiolect at work in WoO that does double duty. For readers unfamiliar with Mormonism, it operates as playful lyricism, a litany of images, alliteration, and oddities such as salamanders, Egyptian objects, and words such as Urim and Thummim (names of seer stones used by Smith for translation) that seem more prosodic than thematic. But for those who share Angle’s background, such as this author, these phrases and images are the lynchpins of the “heretical” work in which she is engaged. They are a catalog of references to canonical Mormon doctrine, cultural mores and mythology, as well as mystical origins of Smith’s theology, which was built on a series of encounters with American spiritualism and other traditions that ranged from water witching and Freemasonry, to seer stones, treasure hunting, and  Swedenborgian philosophy. Early in the translation portion of the book, Angle writes:

[…] mummies curl in a pouch. Moon is itself inhabitant of
marshmallow. Permanent charms pioneer the pavement
mud of wheel ruts. It is the human form pinched to
death with cold. Partly peeled from the element, radiate
in red, one suspicious bowl. A ringside seat to Rosetta
Stone, make hinge-friend. If we believe that the tongue
Is a kind of tattoo. Primitive member, missing link.
Between their piss and peace no mudpuppy, hellbender,
or red elf crest. Salamandra salamandra, sugar up leaves […]

In one short section, Angle upends The Book of Abraham (a later text by Smith), seer stones, the hallowed ground of the pioneer myth, the translation of The Book of Mormon, and the White Salamander letter, a document forged by Mark Hofmann, a disgruntled member of the church eager to both discredit its current leadership and place Mormonism within the legacy of its mystical beginnings.

In its hagiography, WoO is much more akin to Fawn Brodie’s No Man Knows My History, with its in-depth look into the spiritiualist history of the Smith family and other questions of Smith’s legitimacy, than to Richard Bushman’s Rough Stone Rolling, both of which are titles referred to as source material for the book. WoO is every bit as much a historiography and bibliography of legitimacy and fraud as it is ecclesiastical biography or tribute. Scattered throughout the text, and acting as a transition between the preface and Angle’s translation are reproductions of images from Egyptian funerary papyri that Smith purchased from a traveling expedition of mummies and “translated” into The Book of Abraham, a scriptural text that would later be integrated into The Pearl of Great Price and which laid the foundation for a number of Mormonism’s more unique doctrines including the plurality of gods, the pre-mortal existence, and the planet Kolob—the star closest God’s home. These papyri and Smith’s translations remain deeply problematic for many members and Mormon scholars, yet they remain crucial to the “textline” from which Angle descends and they are only one of many such examples tied to Smith’s work. There was the supposed Solomon Spalding novel, long lost but written a decade or so before The Book of Mormon, that outlines the lives of the Nephites and Lamanites, lost tribes of Israel who washed ashore in North America. There were also the Kinderhook plates, further translations of ancient tablets found in an Indian burial mound near Nauvoo, IL, that turned out to be a hoax played on Smith by locals. References to these works and others weave themselves into WoO, tracing a literary lineage as remarkable from a creative standpoint as it is troubling from one of faith. Early in the book, she outlines the perils of the textline’s faith and artistry:

Who would hang a fake?

A way to teach is to say faction is truer than nonfiction.
We see the thought progressed in Plato’s “god must be
represented as he really is.”

Who do you take sympathy with?

Which mind do you choose?

Of course, it is almost impossible to invoke the word “fake” within context of Mormon literary history without simultaneously invoking the name Mark Hofmann, who in the midst of a crisis of faith and ongoing financial troubles, honed his skills as a forger to a nearly unprecedented level and would later turn to murder via mail bombs to try and cover his crimes, nearly killing himself when one exploded in his car. He forged founding American documents, Emily Dickinson poems, and much more. But his specialty was Mormon history. He loved provoking Mormon leadership and fomenting doubt and disagreement in their followers. One document, the White Salamander letter, was supposedly penned by Martin Harris and outlines how it was not the angel Moroni, but a white salamander (the salamander being a potent symbol in various mystical traditions) who led Smith to the gold plates.

Salamanders make repeated appearances in Angle’s work, as does Hofmann, “Krill bashed her squash / blossom necklace, but enter Hofmann’s & ‘Thou may’est see the burn marks yet.’ ‘Thou may’est’ papyri-sty / climb.” Later in the same piece, she writes, “Polygamy is not interested but it wants / his sperm count catered. ‘Mercury, or quicksilver, that most volatile of metals and a central alchemical emblem.’” It is worth noting here that Hofmann used mercury switches for his bombs, triggers that are particularly volatile. In these two short passages, Angle draws a direct line between the practiced alchemy of Smith’s spiritualism and mysticism and “alchemy” of creation, even for less-than-savory reasons, such as the creation of scripture or history wholly from the imagination or the making of paper and iron gall ink that can fool an appraiser.

In one interview Angle refers to Smith’s book as a “mongrel.” It was almost certainly pastiche. “Ready-made” may be a more appropriate word. Like Duchamp, who also makes an appearance or two in WoO, Smith had a keen eye for repurposing otherwise overlooked artifacts and texts and putting his own flourish on them. Angle takes up her place in this tradition beautifully, and with a humor and lyricism that Smith could only dream of. She is participating in other literary traditions as well, as she makes clear in her notes about source material for the book. Claudia Rankine’s Don’t Let me be Lonely is named specifically, as is Harold Bloom, but it seems that Charles Olson is here in spirit as well. Like the aforementioned writers, Angle does not merely trace the violence and indiscretions of her topic, though they are numerous, especially if the legacy of his creation is considered. Instead, she builds a network of histories that spans nearly two centuries and at least one continent while encapsulating an enormous spectrum of motives behind the creative act. As a translator, she complicates her source material in a myriad of satisfying ways, understanding, as one passage in the book’s final pages notes,

Objects are outside the soul, of course; and yet, they are
Also ballast in our heads
Posted by Sugar House Review at 1:55 PM