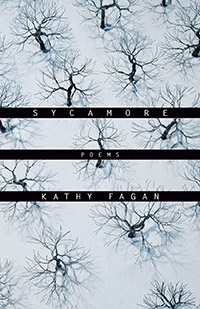 Kathy Fagan’s poems have lent their talismanic power to readers for over thirty years: in The Raft; Moving & St Rage; The Charm; Lip; and now, blessedly, Sycamore. In book after book, Fagan teases, bringing to light what we thought we knew, what we want to learn, what she has come to know, and what she will tell so as to include us in her wild unknowing.

As a volume, Sycamore displays extraordinary coherence. In a recent interview, Fagan admits that it’s something of a “project book” insofar as its subjects “consumed my days and nights and bled over into my artistic life, and as such… entered the poems, shaped the poems, and my vision of what the poems could be.” The book’s title, its stunning design (cover by Michael Kellner), and more than half the poems put trees front and center. Plantanaceae is the prominent family: the American sycamore or buttonwood, and its cousin, the London plane, trees distinguished by their stature, their hardiness in cities, and by the pale, mottled camouflage of their bark.

The opening, wildly inventive poem, “Plantanaceae Family Tree,” contains seeds of myths from Egypt and beyond, of the poems that will follow, and of poems as yet unwritten. In “Letter to What’s Mostly Missing,” Fagan plants some tree knowledge: “That’s all for now, except to say that, unlike other trees, / the sycamore’s bark can’t expand, so it just breaks off, / which accounts for its Bernini-like sheen.” She builds “Inscription” around the story of the 42,000 plane trees that have lined the Canal du Midi since the 1830s. Over the past decade, the old trees have succumbed to a fungus, and are being felled and burned by the thousands. But Fagan never sentimentalizes, “So what / if we are replaceable? Mostly I love how / we burst the prisons of our skins and shine.”

Contemporary philosopher Michael Marder might place Fagan’s tree poems in the tradition of what he calls “plant thinking,” “a way of thinking that is not only about plants, but with them,” a form of “intimacy grounded in difference.” When Fagan sees herself in or as a tree and vice-versa, or when she converses with trees and has them converse among themselves, she tries out strange and wonderful strategies of cross-species identification. In “Santa Caterina’s Tomb” and “Inscription,” she calls the sycamore her “emblem,” evoking the Catholic tradition according to which the sycamore represents clear vision of Christ. But tree is never reduced to symbol. In “Inscription,” she admits, “Mostly I love the light / they hold inside, the all-too-much and aged toujours / of them, their airborne electricities. Who’s to explain / affinities like these?”

“I may look smooth—” she tells the reader at the beginning of “Self-Portrait as Sycamore in Copper and Pearl,” and complicates the analogy right away:

moments, bullion bars
fanning through the showy
oaks & maples & the sweet
sweet gums. When blue is

dominant all over
the earth, atmosphere is king,
the air so hammers-on-
strings-perfect it steals

the voices right off
the birds.

Fagan’s lines move through human and tree bodies with what feels at times like laparoscopic zeal. Language is a calibrated instrument that pushes into the blight that must be discovered. At other times, Fagan’s lines exert a no less visceral, but infinitely more tender pressure on the surface. In “Sycamore in Jericho,” a poem about the diminutive tax collector, Zaccheus, who climbed the sycamore so he could see Christ, the speaker employs her reiki touch (on herself, on her reader):

And after that, I felt, for a long time after, a weight on me then,
a heated impression, hotter than the sun’s,
like a word can leave or the memory of a child
in one’s arms.

Losses of every kind also reverberate through the book’s bright air and are absorbed into its tissues. In “Letter to What’s Mostly Missing,” she writes, “In any case, one can only ask how many / names for the past there are. I am one.” We recognize the stage of life from which these poems issue. As she writes in “Black Walnuts,” “It is the season of separation & falling / Away.” What trees and humans share, Fagan might say, lifting a phrase from “Sycamore Envies the Cottonwoods Behind Your Place,” is “the one altricial need,” a species-wide certainty that each of us begins and ends in a state of fragility and perfect dependence.

In the extraordinary final poem, “Eleven-Sided Poem,” eleven tree species accost the poet after her death. “[O]ne of the whiter / sycamores who live on the river said, / Kathy, why didn’t you live in your body more?” The poet defends herself, “So, I said. Listen, you trees / (though I could not speak), / I remember dying to grow up. Standing / on tiptoe to pull my own baby / teeth.”

“Nervure” (the hollow veins in a leaf, or an insect’s wing) is one of the many poems in which the poet reaches her full lyric span and height—consistently and swervingly true, never portentous in that way poets of lesser skill can adopt as their default move: “I will die knowing less than I know now: That I bartered / my children for words and my words for love. That all my debts / were paid in full. And that when I was finally a child again myself, / scared, hungry, and cold, I was aware of none of this.” “Convent of Santa Chiara and the Poor Clares” is set in Assisi. When I read this poem, I began to think of Sycamore as providing a kind of hospice care in the archaic sense, a way station where one finds basic sustenance, but also comfort and the quiet chance for a reckoning. Such reckonings happen every few pages. In “Choral Sycamores: A Valediction,” Fagan builds an ars poetica around the figure of Daphne: “Like her / We are beheld unheld; we will not leave / The earth alive.”

Fagan’s way station, if at times primitive in the elemental sense of the word, is never austere. The book is full of the poet’s characteristic humor and the delight she has always taken in intricate wordplay, but is more indulgent in its pleasures than the previous books. Every pun pays unexpected dividends, windfalls of meaning. Most importantly, above Sycamore shines a sky of evident joy. At the end of “Letter to What’s Mostly Missing,” is a double gesture of tenderness offered and received: “The oak says, Let me spread / this mantle of blue over your cold marble shoulders, / Sycamore. And what can she say but yes.” We join this poet and her trees in affirmation. Sycamore warns and warms us, and deserves in return every show of love we can offer.