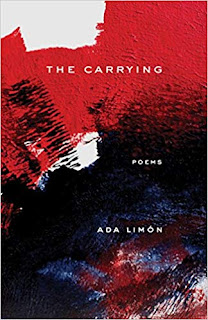 To paraphrase and evoke Whitman, the poems in Ada Limón’s The Carrying are multitudinously vast, centered in binary dualities—life and death, despair and hope. The gorgeous lyricism in The Carrying does the work of holding the spaces of both the verb and noun of “carry” which embodies support, transport, transmission, infection, to be pregnant with, movement, acceptance, responsibility, consequence, and propulsion. The poems show us the experience of both devastation and reclamation, survival and thriving, hope, inside what it means to be acted on, to act on ourselves, and to act within the world.

A significant aspect of the duality of Limón’s poems is the invocation of the natural world, where there are 75-plus references of flora, fauna, natural locations, the occasional botanical name, and more standard references such as moon, ocean, and stars. These references conduct a magical significance all their own, as if specificity in naming gives way for an allowance and permission for a kind of carrying, entrance into, ownership of; the ways in which we can enter into the conversation about our humanity and how we choose (or possibly not choose) to survive. For example, in “Ancestors,” the speaker speaks of survival, both of the self and of ancestors/history, and the relationship of belonging within the framework of the natural world.

Imagine you must survive

without running? I’ve come from the lacing patterns of leaves,

I do not know where else I belong.

Here we experience the duality of survival and extinction within the specificity of the natural world. The speaker is connected and belongs. Similarly, in a perfect depiction of the struggle of despair and hope, in “The Leash,” the speaker states,

[…] How can
you not fear humanity, want to lick the creek
bottom dry, to suck the deadly water up into
your own lungs, like venom? Reader, I want to
say: Don’t die. Even when silvery fish after fish
comes back belly up, and the country plummets
into a crepitating crater of hatred, isn’t there still
sometimes singing? The truth is: I don’t know
But sometimes, I swear I hear it.

In this instance, the reflection here regarding humanity and the natural world hits close to home. What are the results of our ecological destruction worth? How do we go about healing our Earth and each other? How do we carry on and through? How to find a glimmer of hope? As Limón states, we don’t know about the hope, but our wish is that sometimes it is there.

Limón conjures death both in the literal evocation of death of humans (a young man who overdoses, a miscarried child), death as collapse in the natural world (roadkill, dead animals, flowers not sprung from the earth), and metaphorical and symbolic death/dying (father with Alzheimer’s, the struggle of trying to conceive a child, a corrupt US government, ICE raids, the problematic symbols of America (national anthem, flag), racial tokenism, sexism). In “Mastering,” the speaker encompasses this duality as “…how mute and mirror I can be,” illustrating the rupture of a blistering, painful moment between herself and an old, male friend discussing having children, but perhaps also the appropriate reaction to the inevitable life and death cycle. Even through all of the explorations of tragedy and suffering that Limón eloquently extrapolates from the most tender and fraught moments, there is a sense of hope and rebirth. In “Almost Forty,” the speaker admits,

[…] I’ve never been someone

to wish for too much, but now I say,
I want to live a long time. You look up

from your work and nod, Yes, but
in good health.

Even now, I don’t know much
about happiness. I still worry
and want an endless stream of more,
but some days I can see the point
in growing something, even if
it’s just to say I cared enough.

In these examples, Limón outlines moments that keep us hopeful in the face of life’s unfathomable tragedies, suffering, heartbreak; and willing to seek an answer to the inevitable question she poses in the poem “The Real Reason,” “…But do we / ever really know each other fully?”

The Carrying encapsulates the complexity of what it means to go along with the living, the hope in being alive and thriving, the precious dualities of life that are a universal experience for all human beings in this world. As in this moment from “Dead Stars,” the poems of The Carrying document the experiences and emotions that propel us forward.

But mostly we’re forgetting we’re dead stars, too, my mouth is full
of dust and I wish to reclaim the rising—

to lean in the spotlight of the streetlight with you, toward
what’s larger within us, toward how we were born.

Look, we are not unspectacular things.
We’ve come this far, survived this much. What

would happen if we decided to survive more? To love harder?
Posted by Sugar House Review at 3:09 PM