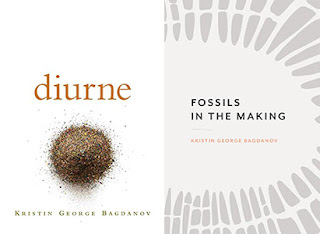 Fossils in the Making
(Black Ocean, 2019) and Diurne (Tupelo Press, 2019)
by Kristin George Bagdanov
Reviewed by Dayna Patterson
Kristin George Bagdanov’s first two collections, Fossils in the Making and Diurne, are very different books, yet both speak loudly to the current moment and complement each other in satisfying ways. In both, Bagdanov ruminates over crisis, the body, mortality, and what we leave behind (both private and collective legacy—we are all fossils in the making), as well as the relentless march of time, marked hourly in Diurne with daily poems that accrete, a line added each hour for almost an entire month.

In her first book, Fossils in the Making, the opening sonnet sets the tone for the poems that follow. In “Lines Written After Crisis,” the speaker posits that we are continually in the midst of crisis: “crisis always in medias res.” The poem alludes to bullets, 9/11, the rise of “a tyrant,” indisposable plastics. All this foreshadows an unretractable future of disaster:

Oracle that reads
in glowing teeth a future now

past
Orpheus singing into the ears of leaves
a song to re
wind eternity.

This poem resonates deeply. We are in the midst of a pandemic, yes, but also a climate crisis, a tyrannical president’s term with November elections just finished, an accumulation of plastics that are choking our oceans and filling the stomachs of whales, turtles, seabirds, etc. We are living in crisis layered on crisis. Readers are faced with the question: how do we go on living? How should we seek to shape or alter what we leave behind?

Bagdanov eschews (easy) answers in the three sections that follow: “Proofs,” “Wagers,” and “Remains.” She presses into the wounds, offering a series of proof poems, presenting sentient existence as a wager, and examining various kinds of remains, the vast “field / of bones” that all the living leave behind. So what claim or claims does Bagdanov’s proof poems prove? The key is in the titles, “Proof of Harm,” “Proof of Parasite,” “Proof of Sorrow,” and “Proof of Hunger.”  Bagdanov, in poem after poem, presents what might be construed as poetic evidence of humanity’s muddied legacy. A single poem can contain an oil spill, the accidental violence against seabirds, and the violence we inflict on each other, in particular against brown bodies. Other poems focus on calving glaciers. Felled trees. An accumulation of grievances proving humanity’s harm.

Besides the content of Fossils in the Making that speaks so poignantly to anxiety over embodiment, mortality, crisis, motherhood, and private/public remains, what stands out in Bagdanov’s work is her playfulness with language and commitment to experimentation. I appreciate the consecution that transforms “carcass” to “caress” and “from” to “form” in the initial sonnet, and the final poem’s echoing (“turn” becomes “urn” and the last “hello?” ripples out to “lo” and a solo “o,” reminiscent of Joyce’s final “.” in Ulysses). The entirety of Diurne is built on the premise of experimenting with form, as the first page indicates: “A line each hour of waking / A poem each day of making.” While Diurne is a long-term relationship with its method, Fossils in the Making is more akin to speed dating; Bagdanov displays an astonishing range of experimentation with line breaks, punctuation, cleave poems, white space, etc., throughout the book so that, despite the heavy subject matter, there is a constant source of delight to be derived.

In both Fossils in the Making and Diurne, I’m in awe of Bagdanov’s recursiveness, how lines and phrases from poems echo within individual poems, but also across (and even between) the manuscripts, lending both books an almost dream-making, trance-like quality that I admire, and which reminds me pleasantly of work by Carole Maso, C.D. Wright, and Julie Marie Wade.

Bagdanov has received much deserved attention for Diurne, winner of the 2019 Sunken Garden Chapbook Poetry Prize. Diurne (like “diurnal” or daily) contains a Lucie Brock-Broido-esque poetry of ellision, enticing onelets or verse paragraphs that house enough mystery to invite reading and rereading. Bagdanov’s non-sequiturs exhibit an astonishing range, from humorous to profound, lyric to prosaic, intimate to stand offish, deeply thoughtful to wryly shallow. Having participated in several years’ worth of NaPoWriMos and feeling entirely wrung out after a month’s poem-making, I cannot imagine a month’s worth of hourly line composing. Bagdanov writes “This requires more effort than you’d think. A constant waking.” I believe it.

Clearly, both of these books are the products of the same brilliant mind. Added to concerns in Fossils in the Making of microplastics, DDT, calving glaciers, and impending apocalypse, in Diurne readers encounter nuclear catastrophe and waste, cancer, abuse, a growing carbon footprint, and more. In both, Bagdanov broods over an uncertain future, one that rests tenuously in our fallible hands.