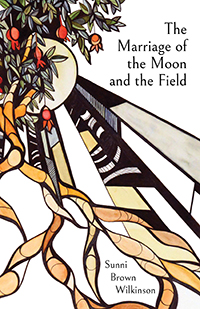 The Marriage of the Moon and the Fieldby Sunni Brown Wilkinson
(Black Lawrence Press, 2019)

In this superb debut collection, Sunni Brown Wilkinson offers poems of compassion and wonder. This is an accessible, yet wonderfully complex book. In many of the poems, Wilkinson focuses on family and the acts that bind hers together, such as her children finding a plastic turtle on a beach, naming it Crawley, and carrying it with them in the car to “all the lakes we know.” Likewise, while burying a dead bird her son finds in their yard, she writes, “We cradle its head a moment before / the darkness comes.” She remembers an unselfish act of her husband: “[We] are close and you are quiet / and more than ever that man who lifted / my dying friend last summer / into the sunlight and carried her in your arms.” Wilkinson is present too, cooking soup for its goodness, smell, and fairy-tale history. “Maybe I’m a witch,” she says, at night stealing out “onto the wet grass / and danc[ing] wildly under the stars / still smelling of soup.” While family and marriage are a polestar, the poet is also drawn to the lives of others, to myth, and to nature’s convergences.

The word “marriage” in the book’s title also implies her strong affinity for others around the world, from various cultural and religious backgrounds, from Chiapas, Vienna, Juarez, and Mozambique. Wilkinson shows much empathy for those who are ill, murdered, abused, or displaced. She weaves religious mythology throughout the book in some poems that spring from and value the stories, and in others revealing the hypocrisy in organized religion. It appears Wilkinson deepens her spiritual philosophy, which is that all life including nature’s, is braided, wedded, far beyond a cinching to our own families, religions, and beyond selfish concerns.

Many of those she writes about are female. “The Body Carries Its Own Light” is about an eight-year-old girl in Chiapas, who hails from a large polygamist family. Young Mary is eating unattended and chokes on walnuts, blacks out, and stops breathing temporarily. She suffers serious brain damage as a result. The poet tenderly brushes her hair much later on, when she meets Mary, as if she is brushing out the memory of the event: “Dark horses, Mary. Dark shoulders in the dusk of your long hair.”

Throughout the poem, Wilkinson nimbly weaves images of horses bred on the farm, alternating metaphors of death, birth, and strength. As the poet addresses Mary and unfolds her story, there are “Black horses in the darkness that covered the farm where your mother found you / slumped and breathless,” while a mare in the barn “lay back wearily” with a “strange sac / between her legs / torn and white / once encasing her foal.” The breathless foal appears reminiscent of Mary’s near-death state.

Although the sister-wives call a doctor who comes on foot to help, he cannot, and somehow Mary is brought to another country, to a care facility, where she meets Cecey, a woman recently having escaped her country in a truck under a tarp. Cecey lovingly tends to the girl, and believes Mary will walk “through the gates of Paradise / before us all, not contrite / but like a terrible horse, trampling the last embers of the dark/with your tiny hooves.” This reiterates what the poet believes—that Mary will be strong in her next life, embodying the fury of a horse, and carrying her own light, as the poem’s title states. The poem suggests compassion is a force in this life, not just a chore performed to lead us to the next.

The light in the book’s title carries many meanings. Although moonlight is associated with lovers, and is how one finds one’s way in the dark, it also creates shadows and hidden turns, like the dark turns in Wilkinson’s other poems about women’s lives. The poems stir these lives, these images, into a concentrate that is archetypal, illuminating the connections between myth and reality.

For example, in “Approaching the Threshold,” Wilkinson’s young son has questions as he reads myths about women, while she unfolds the story of a Juarez doctor, who places cut-up body pieces of murdered women in a chemical solution that restores them, so DNA can help identify them and possibly their killers. The doctor is paradoxically a savior and a Victor Frankenstein, one with misogynistic tendencies as he plays:

woos and comforts dead women in a den

of puce liquids and glycerin. “I take many girls

to bed,” he jokes, holding their bodies at night, “but not

the way you think.”  He carries them to the bath

the way a man carries his bride

In an alternate section, Wilkinson’s son asks how Persephone, “trapped in the underworld,” got out. “Did she climb / underground volcanoes, swim up / the whole ocean, dodge the sea beast and pull / herself fingernail by shoulder onto shore? Or was there a door?” This poem’s collection of lives in myth and modernity make the irony clear: women have always been vulnerable to entrapment, or reduced to their body parts. Beyond the cruelty to women that has happened and is still happening, what is so striking about the poem is that the poet realizes her son, in his innocence, does not yet know some women will never find their door.

Wilkinson also channels female voices in “My Possible Pasts,” in which she imagines herself as women from other countries. In section one, she is a Roma girl:

I am two steps away from the sleep that turns me gray.

to the end of the earth.

In section two, the speaker is a Northern European woman:

my mother far away.

In the longest of summer days

I hear the fir tree seeding,

the reaching of each upright needle.

The planets sing their silence.

Earth is a coin

Reaching and reseeding like the fir trees, under the distant cosmos, or looking at her mother’s lanterns, each of these women looks to mothers or nature for comfort, amidst lives that appear to be unsatisfying. These themes of mothering, the unborn, and birth are crucial and recur throughout the book.

Two poems reveal Wilkinson’s own emotional state while pregnant. “Nesting Dolls” begins with Russian Matryoshka dolls that nest inside one another, and how “the biggest one carries all that weight / inside her it’s a wonder / she doesn’t fall over.” This is a humorous start to a poem while her baby is in utero, and the poet’s protection of her family during a storm. She feels a “tap” from her unborn child, and hears another son whisper as he hears the train whistle, “Someone is calling your name.” As a mother, her nurturing is automatic, yet there is always that longing for self-definition.

In “My Son Says He Has an Owl Inside Him,” the poet is pregnant, and sees her baby in utero as a vulnerable orchid slowly unfolding during an exam, and she wonders about her unborn child, asking, “What will he find when he comes?” and “[ … ] all day I wonder / if the world is enough.”

The last line in the book, “The owls inside us open their wide eyes,” suggests that she is also pregnant with a need for awareness, as an owl is aware, for the baby, and for her as his watchful mother.  I am reminded of a line in Sylvia Plath’s poem “You’re,” that addresses her unborn baby: “Wrapped up in yourself like a spool, / Trawling your dark as owls do.” The inhuman owl-baby in both poems is depicted as very much alive and strong, yet there is a loneliness projected by each poet on life in the darkness of the womb.

Wilkinson’s love of domestic life is set against her own hunger, as in “Honey on the Bread, Bread on the Honey.” She delights in the natural while breastfeeding: “Flanked by his cries / I shift the T-shirt, everything in the way of the breast / that opens itself like a flower.” The poem’s wonderful tension comes as she sees herself rising like bread, like milk in her body, foods of this world associated with women and domestic tethering. She questions what happens to appetite,

in religious myth, after one rises from the dead:

I’m practiced in the art

for what I don’t have.

and we understand. After he raised the dead,

what would they eat

and the spirit fresh with empty?

of the mouth it’s the tongue

Wilkinson looks for how to live her life with kindness, a sweeping ethic, and her own continual search for manna in the language of poetry. I am taken by her honest depiction of women’s lives.

Arundhathi Subramaniam, a contemporary Indian poet, says in her description of good poetry:

Of course the poet has to be sensitive and alert to the world  around her—its history, its politics, its ecology, its culture, you name it. But poetry is born when all that she has absorbed has been so deeply internalised that it is an utterance that arises from her marrow, her bloodstream. Poetry is verbal magma. That’s why it’s so explosive, so magical, so incredibly alive, and has to be handled with such care. It’s language that’s subtle and dangerous all at once.

This verbal magma is in Sunni Brown Wilkinson’s poems; her readers will be both shaken and lifted by her luminous rendering of humanity and left with a hope for the spirit to have peace in some type of rebirth.