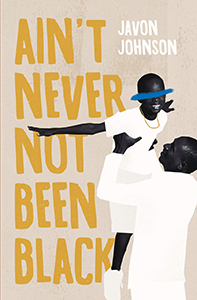 Ain't Never Not Been Black

In Javon Johnson’s newest collection, Ain't Never Not Been Black, America is choking on blood. Cops are murdering Black children and Black mothers fear their sons might come home “body-bag beautiful” and “a hashtag,” while America erases them. Whether infused with the lament of Black death or the celebration of Black culture, Johnson’s poems scream:

I want to live in a world
where the police do not murder Black children.

In this collection, Johnson’s America is America, and America has always been cruel to Black lives, a relationship to which Johnson responds in the poem “Blackboys/Cold”: “and isn’t that what being Black is all about / how the world works to reduce you / even if you only want freedom.”

The book is not divided into any sections, though there are many recurring themes: grief, death, displacement, hypocrisy, violence, survival, and family. Some pieces are experimental in form, such as “Black 201,” a poem written as a college course description: “Course Schedule: This course will be mad fluid. This course/ operates on CPT. This is also a lesson in survival.” Others, like “Wishing Well,” look more familiar: “When my mother tells me to get home / safe, her voice is the last coin she owns.”

Throughout the collection, Johnson demonstrates a deep relationship with language and every sentence is masterfully crafted. For example, in the poem “Los Angeles” he combines place with memory: “Los Angeles is a gospel song my grandmother used to sing.” In the poem “America,” nature holds human hatred: “The air was a ‘whites Only’ sign.” The rhythms found in many of the poems is a reminder to the reader that Johnson comes out of the spoken-word tradition. These poems coax the reader to read them aloud, their sounds, and our participation in the poems adding new dimensions to the work. Like in the poem “A Lesson in Proper Sentence Construction,”

Several pieces explore relationships such as that of Malcolm X and his daughter (the night before his assassination), as well as those between uncle and nephew and mother and son. There are many poems that talk about the near, the familial. However, the poems also reveal a consciousness of institutions and power. In the poem “Everything I Know About Gentrification I Learned From My Step/Father, Or When the Cancer Comes,” Johnson infuses the poem with both in his claim that “To gentrify is to take the body / and gut it.”

Perhaps one of the most moving poems of the book is the previously mentioned “America.” In the beginning, the word America is defined as “Black people” and is repeated every few lines accompanied by retellings of (and commentaries on) history.

America knows that. Knows that
Lincoln did not free the slaves [...]
oh, America, the beautiful,
sleight of hand.

Later, the poem turns to how the country has abused Black people, starkly ending with the lines:

please remember,
in this poem
America was always
America.

In an age where naming dignity for Black life has become a trendy culture for white liberals, in an age that has been like every other age in our history in which Black people are being murdered, Johnson’s lyrical grief shakes the souls of its readers. The collection contains a series of poems titled “Black Famous (A Faux Haiku Series).” Some carry a more serious tone, such as “Black Famous 4” (“No twitter coffins”). Others, more humorous, like “Black Famous 3,” which begins “One day I’ll show up / to see Cats on Broadway […]”

Nonetheless, many of Johnson’s poems commemorate Black joy and resiliency. “I didn’t want to be sad,” Johnson writes in the piece “Black and Happy,” “didn’t want white supremacy / to tell me how to feel again.” Then, later in the poem, there is the declaration, “You cannot kill Blackness; / too much of it is wrapped in unshakeable joy.”