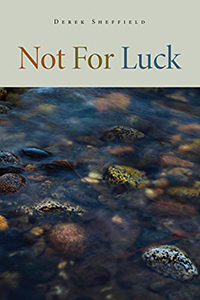 There’s a quiet generosity in the poems of Derek Sheffield’s second collection, Not For Luck. With Sheffield’s rapt attention, luminous imagery, and attuned ear, these poems enchant us into intimacy with ordinary moments that are rendered extraordinary. Whether we are witnessing the surface of a sprinkler-filled pool left on the lawn, deer crossing the road with “the silky / pistons of their steps,” a father smelling “the lotion” of his daughter’s sleep, or wild irises “with lines thin as moth legs” growing wild in a ditch, we are welcomed into the poet’s vision like a friend, shown the world peeled back and fresh.

In the poem “hitch,” Sheffield scatters the stanzas back and forth across white space like the movement of water as the speaker follows a stream “back into the hills” where he encounters “a white dab / of a day moth stuck up- / side down, wings full spread / and legs like sutures / crookedly struggling.” How many times have we encountered a similar sight? There’s a quiet pleasure in focusing the poem on this encounter. As the speaker’s reckons with rescue of this small creature, he confronts his own reflection in the water and considers his own inevitable acts of harm with this one act of rescue, to “divert a little life / for once.” With skilled and patient craft, Sheffield enchants and draws us close into this encounter, and quietly weaves in the larger questions of harm and help that arise. As an eco-poet, Sheffield trusts us to find echoes of our own complicity in a time of so much ecological harm, and question the small acts of compassion in the face of loss. But this larger reckoning is nested in wonder, in a quiet rescue of a drowning moth who is released “onto the bark where it crawls / wing-shivered into one / of the many furrows.”

Sheffield brings this same generous attention to moments of intimacy, challenge, and loss in poems of fatherhood. In the moving poem “First Grade,” Sheffield opens with a scene where the father and daughter discuss a heads up, seven up game she played in class. From here, Sheffield moves into imagery and imagination that allow us to feel the love and limits of protection a father can offer. After realizing his daughter’s feeling of rejection, the father enters the game in his imagination, “seeing / children in rows, heads on desks, / her big ears poking through sandy hair, / listening for a step or a breath.” All at once, we become both the child waiting to be picked and the father wanting to protect her. The poem ends with a stunning image that captures the impossible poignancy here as the father imagines, “I stand / and walk over to find the outline of her hand / plunging through a white sky.” This last line dangles alone in white space, reflecting the vulnerability of the image.

In the fatherhood poems, love and care is shadowed with inevitable losses as daughters grow into themselves. “She Gathers Rocks” is a delightful poem that travels on sound-rich short rhythmic lines that explore these woven intimacies and losses. This poem sings and clips with rhyme, alliteration, and rhythm that carry us through “her buckets, / her pockets / already clack-and-bristle / full.” This gathering of memory and time slips away as “it’s gone into her / quickening eyes and stride / that have left us.”

These poems don’t hide behind tricks of language, but rather trust that lyric language and a faithful looking can bring us closer to the wonder of encounter in the world, to love and to the inevitability of loss. In “The Seconds,” one of my favorite poems in the collection, Sheffield masterfully unfolds an act of discovery in a woodshed where “Something had curled here in the gasoline nights / all winter as snow and more snow made a world / of white mounds.” What is found there weaves a creature with a beloved dog who has died, with daughters who are growing out of childhood, with collecting the “rain-colored seconds” of what is held close. Such is the generosity of trust and transparency in the close encounters of these poems. The poems then become gifts and guides, allowing us to trust and turn towards our own rapt attention to the ordinary/extraordinary moments of our lives. I’d call this a poetics of love.

Anne Haven McDonnell lives in Santa Fe, NM and teaches as an associate professor at the Institute of American Indian Arts. Her chapbook Living with Wolves was published in 2019 by Split Rock Press, and her full-length collection Breath on a Coal is out in September from Middle Creek Press. Her poems have appeared in Orion Magazine, Terrain.org. The Georgia Review, Narrative Magazine, The Hopper, and elsewhere.