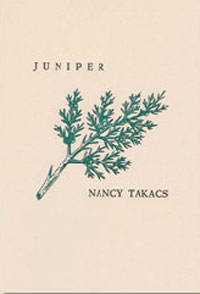 What is true of the yellow trees, the cottonwoods, black walnuts and poplars that Utah poet Nancy Takacs describes as all along the desert horizon—with theircadmium,/ochre,/pumpkin,/saffron,/hardly any green now,/in stands and circles that spray yellow-blossom—further, how they shine in the dark—is true of all the poems in this, her third book, Juniper: they emanate the same huge translucence. Sensuous imagery is everywhere, imagery she draws from a deep connection to the natural world, her desert landscape and home, from earth’s resonance within her.

In this collection of thirteen poems, recently published in a beautiful letterpress edition by Limberlost Press (featuring cover art created by Takacs’ son, Ian), Takacs invites us in. These are poems we can enter, trust and, like the poet, feel our way along. Right from the start, the title poem tells us

Juniper’s the word I chose,
I love, the tree that makes me feel
I’m less on Mars than Utah.

In her characteristically straightforward way, Takacs gives us, so to speak, the keys to her heart, to the poems and to the almost-alien but beloved high desert near the San Rafael Swell where she and her husband (poet Jan Minich) made their home many years ago.

The tactile world, and her own inner truths, are equally her home, leaving no room for the dictates or dogma of imposed, inherited beliefs, namely religion—I gave up religion / years ago, but still believe / in junipers, she states. Nor is there room any longer for the fear-inducing tyranny of her Hungarian grandmother’s superstitions: No hats on the bed, / shoes on the table, / open umbrellas in the house. / No kissing a man who wears a hat. It’s a wonderful moment, at the end of the poem, when Takacs describes this deeply serious, seemingly trivial, act of defiance, I take the hat from my husband’s head / and throw it on the bed and more wonderful, and profound, when she then proceeds to describe what she does choose, what she does draw nourishment and poetic inspiration from. She tastes the bitter pungent juniper berry,

Which takes me away from its cousin narcissus
And back to the tree itself with its ancient
Shaggy-body universes of dark-blue berries
That know in each green center
How to pine the air, how to
Curry the tongue.

From such an earthy connection arises a voice that is grounded, courageous and compassionate.

It is a voice felt throughout this collection of poems. In “Twentieth Anniversary,” which begins by tenderly conveying the lasting love in their long marriage through everyday detail—Last night we had a feast of halibut / he cooked with fennel, / and I sliced tomatoes from our garden—and setting the scene, showing herself looking at her husband’s Old Spice and Everafter cologne bottles in their medicine chest. Takacs continues, reflecting on a time of doubt and suspicion, of how she came to feel, to understand, to trust her husband’s ways, though different from hers.

I found he has integrity
though he doesn’t reveal much.
Which I do. I always do.

In fact, to look back at Takacs’ other books (Pale Blue Wings, Preserves) is to see that this has been true of her work from the start, that she reveals, though her earlier collections are darker and more confessional, their material often the pain of memory, family history, violence, or, as the poem “I Should Feel Pain More” calls them, truths and abandonments. Here Takacs reflects, with some irony and distance, that these abandonments have to come out sometime, that she has been afraid to let go, but now even as the shasta daisies bloom in her desert yard, she participates in this new healing. As the yellow trees shine in their translucence, as the juniper tree offers itsshaggy-body universes of dark blue berries, from deep in each green center, so the more domestic shasta daisies in her own yard offer sustenance, even approval, though

They look so fragile,
whiter than any teeth or stars, so white
I can go out at night and still see them
along the fence all the way up to my front porch,
laughing.

Yet these poems do worry. No one knows how long they have, Takacs says of the yellow trees—because of drought, the desert, and changes wrought by man. She sees that the animals too, in Springsteen’s words, have “hungry hearts.” In the poem “The Deer,” these hungry creatures and humans are shown competing, in conflict for the same land, or, in this case, the only five trees (they) have planted in their yard, as the neighborhood deer come at night and eat them. Takacs sees, and seeing, must say, though acknowledging disquiet, and lamenting the loss of the trees, she praises:

At first we find
Their coffee-bean-dark stools, then their deep
Hoof prints, double trails through the snow, winding
And crossing. I follow to the beginning to look
Where they jumped in.

Her words themselves are deep hoof prints…trails through the snow, winding/and crossing, throughout this entire book. We follow, and share both Takacs’ awe and concern. For instance, in the poem “The Flicker,” the poet speaks directly to yellow-headed blackbird, as if to her Muse, in trying to cut a deal, imploring it to stay with the promise:

…..I’ll set out
water under every tree if you raise
your young among the milkweed
and bindweed in my yard.

The bird is at the mercy of the drought, as are we. The water she offers to supply can quench it, as does her very language. At the beginning of the poem, the day of the yellow-headed blackbird’s arrival, the speaker admits having given up such a “drought,” of having thought herself a victim in the past, and unloved. It is a day she had decided to clean out her closet of all / shirts that were gray, my favorite color / I became sick of.

Likewise, in “Flying Home After Visiting Aunt Ginny With her Broken-Hip Delirium,” there is such sadness in the image of her aunt she has just visited in the hospital who

stroked her teeth
glued in by an aide each morning,
made sure they were still there.
She held the blue sheet
over her head, pushed it
through the bedrails,
asked me to push it back.
Her face was always dusky, afraid,
her eyes in constant surprise.

His furrows and tufts remind me
of last spring’s badger
I didn’t mean to corner
in our old railroad-tie shed…
widening to show its back teeth.

Yet even in her mourning Takacs searches, taking an aerial view out the plane’s window, and finds, healing in landscape that even from this distance calls to her. She looks down over the plains, over Wyoming, and the Wind River Range and sees

a field in the shape of a shoe, its ankle opening, unweaving in a spray
of unearthly green, early snap peas? Broccoli? my aunt ate to keep herself well.

The color green, like the juniper berry’s green center, renews her memory of Aunt Ginny, taking her back to the time when she had strong hands, when as a girl she held them, felt them her own and renews her gratitude for her garden at home with its

blooms of blue flax, penstemon,
daisies, beginning fortunately
all by themselves, how
they appear to live only on air,
with so much grace.

“Home” is the title of the last poem in this collection. Again there is nature about to bloom in these last lines, on her windowsill where

The amaryllis
has made another turn on its stem,
has leant again toward the light. It won’t be
long before the ruby slips from its green lips.

The poem is as well a tender portrait of her neighborhood where, waking early, the speaker looks out the window and considers her neighbors’ lives, their daily routines, lights just starting to turn on. She watches from her quiet house, while her husband sleeps, as the kitchen percolates, the coffee brews in the ancient pot he washed and filled last night. In Juniper, as in this poem, it is as if it is because of her love, and her saying, that amidst this darkest time of year, the amaryllis bloom will open—and the skies lift in dark blue and peach. The book doesn’t seem to want to end, but to begin again, the last poem taking us beyond the cycle of a year and spilling over as from the amaryllis bud, when the ruby slips from its green lips.
Posted by Sugar House Review at 11:03 PM