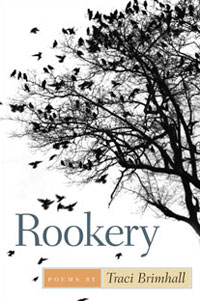 Traci Brimhall’s first book, Rookery, winner of the Crab Orchard 2009 First Book Award, is a book embodied with flesh, blood, and soul. There is a static of truly being alive, vulnerable, aware; a rawness that courses through its pages. This is a visceral book of betrayal, injustice, faith and shades of redemption.

The poem that brought me eagerly to Ms. Brimhall’s book was “Aubaude In Which I Untangle Her Hair.” The first few stanzas grab the reader by the lapels,

Bring me fistfuls of your hair if you want to say
you’re sorry.

I will send my curls one envelope at a time. Your mailbox
will be full of stamps and maple dark hair and apologies.
And

After he left I planted milkweed thistle in the birdbath,
After he left I carved “summer” into the tree and above it,
“summer” and below it, “summer.” And I made my axe
kiss all three summers, and they became firewood.
When I burned them, the stump outside began singing,

These poems have movement and a present power that comes from their embodiment. They are poems felt in the body, not in the intellect.

The first series of poems in this collection is about betrayal. Brimhall expresses pain with such bitter beauty that with each succeeding poem there is the trepidation of one who is viewing something so intimate that the first response is to turn away. Yet these poems do not have the feel of confessional poems, though Brimhall’s speaker explores personal details without meekness, modesty, or discretion. There is no “look at me and my suffering” that many confessional poets succumb to. See “Aubade with a Fox and a Birthmark.”

You crawl into bed, apologies and insect wings
in your hair. I forgive the way you touched her knees,
your amber memory of her body. I make you tell me

how her pleasure sounded— a fox with its paw
in a trap’s jaw, blood on her thigh. I want to hear
how freckles on her stomach made constellations

or “Dueling Sonnets on the Railroad Tracks”

Don’t admit anything. Don’t ask your question.
I tasted her sweat on your knuckles, her whispers
in your mouth like second hand smoke. I’ve wandered
north to the railroad tracks, throwing gravel at the cars.

The small violence comforts me…

In all of the poems, there is a fearless gaze from which we discover the surreal, and the transcendent in the quotidian. Her surrealist elements work because her juxtapositions are concrete, everyday images, moments, feelings. There are beautiful conversations with self and others: “Prayer for Deeper Water” and “Restoration of the Saints.” Poems that reveal that the tender and brutal sometimes coexist in the feral like in “Requiem with Coal, Butterflies and Terrible Angels.” Brimhall’s language is always precise, as in “The Summer After They Crashed and Drown”

Hold them so tightly the inside of their bodies
escape out of their mouths. And we don’t say
their names. We lure wary schools of sunfish
with dead horseflies

And net them. Necks broken, bellies split.
We palm their hearts and watch to see
which stops beating first. When thy slow, we toss
the limp muscle into the lake.

The second half of the collection moves towards a species of piety with mediations on God and faith. Brimhall’s influences are seen here. These are conversations of faith and what faith means. The speaker of these poems is in the midst of a family that has embraced religion and the speaker clearly relates. But again, Ms. Brimhall embodies these poems, or roots them into the earth. These are not poems about the spirit per se, but about the body as illustrated by passages such as

You say it is not the animal in us that loves the struggle,
But the spirit that wants to be locked in the crucible
Of flesh until the soul burns clean…

…Children who’d grow up with a river

that resembled their God—beautiful, brutal and prone to flooding.

Throughout this collection poems break through the thin veneer of the narratives we carry around with us to make us feel in control. They ache with an intimacy and immediacy, even when darker, that is lacking in most poetry (see “Fourteen Years Later and Fiat Lux”). Like the poignantly dark, “To The Tall Stranger Who Kept His Hands in His Pockets”, with its slightly ominous title and its more ominous birds, and then,

You touched my knee. I let you. I could kidnap you

if I wanted. How many park benches
have you sat on alone, trying to spot the same scabbed

knee and braids? How many times have you said
my name to yourself, its taste like pennies,

the warm metal of a child’s sweat? Do you wish
you’d pressed your thumb to the hollow of my throat?

This is a lyrical, surreal and palpable first collection. Brimhall is a poet whose brilliant execution and understanding of her craft will make her voice important in coming years.
Posted by Sugar House Review at 11:10 PM