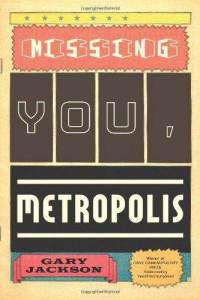 What are the lives of superheroes like? Given the chance to be one, would your life improve? How do comic books offer us a lens onto our own lives and histories? Are comic books merely escapism? Gary Jackson’s first poetry collection, Missing You, Metropolis, winner of the 2009 Cave Canem Poetry Prize, succeeds in providing an interesting and fresh exploration of these questions, as well as questions about what mediums are perceived as art.

It is easy to question why anyone would write a book of poetry that focuses on comic books and superheroes. Though the poems never answer this question explicitly, it is clear that the first poem of the book, “The Secret Art of Reading a Comic,” wants to dispel any reader assumptions about the relative worth of comics. The poem is modeled after Auden’s “Musee de Beaux Arts,” which is in turn a consideration of Brueghel’s painting “Landscape with the Fall of Icarus.” Auden’s poem begins About suffering they were never wrong, / The Old Masters; how well, they understood / Its human position; how it takes place / While someone else is eating or opening a window or just walking dully along, and goes on to consider Brueghel’s painting specifically, and its figures’ willingness to overlook the misfortune of Icarus, as it doesn’t affect their own desires and commerce.

Similarly, Jackson’s poem begins, The old comics were never wrong. / Right always defended / by the hero, and continues, These are treats, delicious twenty-two-page / snacks we swallow, never questioning / the actions between the panels’ gutters / and how similar that world bleeds / into our own. In the last stanza, like Brueghel’s Icarus, we see Captain America in Avengers #4 falling from a disintegrating plane while the action of World War II rages on below, its players oblivious to the figure wrapped / in the American flag, dropping / into the frigid ocean behind.

“The Secret Art of Reading a Comic” draws attention to the antithesis of the book. While comics sometimes avoid small details, jumping in space and time between single panels, Jackson’s book examines the detailed lives and motives of characters in the comics. In “The Dilemma of Lois Lane,” we see Lane confronting the reality of living with the perfect man.

Sometimes,
when we’re alone at home,
fixing dinner, you’ll pretend
to wince when you cut yourself,
and I find myself hoping
that the tiniest drop of blood
will bloom on your finger.

Likewise, in “When Loving a Man Becomes Too Hard,” Mary Jane Parker, Peter Parker’s/Spiderman’s wife, details the loneliness of loving a man that belongs to New York / and its myriad of victims and villains, and how she holds / his absence like a crutch.

Jackson’s work succeeds because it resists the comics’ urge to summarize. Instead, both the poems that focus on characters and those that seem more autobiographical seek to illuminate a particular event, emotion, or trait in a way that comics, in their brevity, do not. In this way, his poems also reject the willful ignorance Auden ascribes to humanity, as the poems become about identifying and empathizing with those who aren’t often given opportunity to share their motives and emotions. Jackson’s poems pull Icarus from the water and set him down on the shore to talk, to explain exactly why he ignored his father’s missive to stay away from the sun.

These poems challenge the assumption that poetry, and literature in general, are superior to comics as an art form. By modeling this opening poem after Auden, and by linking Avengers #4 to the painting by Brueghel, Jackson likens comic books to other art forms, and suggests that they can and do deal with the same themes and issues of so-called “high art.”

Jackson spends much of the book bridging the gap between reality and comics. Interspersing the world of mutants and superheroes with that of our own allows Jackson to talk about race in an original way. In “Magneto Eyes Strange Fruit,” Magneto—enemy and sometimes-ally of the X-Men in the Marvel comics—comes across a horrific scene wherein two mutant children have been brutally murdered and their bodies festooned with signs that mark them as mutants. This scene echoes the famous picture of the real-life lynching of Thomas Shipp and Abram Smith that inspired “Strange Fruit,” the song made famous by Billie Holiday. Like the Northern outrage and anger that sparked the poem and song, Magneto’s reaction is violent, as he wishes to:

rip every man out of his home,
make each one burn, reverse
the earth’s rotation, rupture the core
and tear this planet inside out,

only so they can know how it feels.

A few lines later, Magneto decides that someone must be / the villain for the dead.Likewise, in the poem, “How to Get Lynched on the Job,” we see an example of racism in the real world. The speaker describes an incident at work where a friend whispers something to a white, female co-worker, and that It was the first time / I worried for him, because Whistling and whispering, it’s all the same. The truth is the world ain’t changed. / None of us are far / from ending like Emmett. Both poems make a nod to terrible events and images associated with the murders of African-Americans in U.S. history. The use of one event that occurs in the imagined world of the comics and one in the real world shows the way comics can —like another medium—deal with history and ideas as an art form, and suggests why readers are attracted to comic books.

Jackson uses the seeming dichotomy of the real and imagined worlds to compare autobiographical events with their comic book counterparts. In “After the Green,” the speaker discusses visiting his disabled sister at her school for the first time to see the students chewing blocks, / throwing crayons, and how the speaker then feels ashamed to see her among them. Later, the speaker is filled / with a hollow rage. When all you can do / is watch a body fail, / what words are there? At the end of the poem, shocked at his mother’s pride that his ailing sister outlived the doctor’s predictions, the speaker closes with the line As if this were a good thing.

Compare the tone of this poem to that of “Home from Work, I Face my Newborn Mutant Son,” wherein the speaker arrives home to discover his son is a fragile, glass-bodied mutant and his wife is dead from childbirth. As with “After the Green,” the speaker of this poem seems to barely contain his rage beneath the surface of a well-crafted and coherent voice:

He cuts into my palms and slides
in the creased blood. I see
his tiny organs getting used to their work,
while my wife—bled out—grows cold.
What paper-bag test can this boy pass?
His skin reflects the white of my eyes.
And I know he cannot last.

This poem also ends with a death, though it is the father—grieving the loss of his wife and the fact that his newborn son will never survive the world in such a state—that drops his son to the floor, shattering him. Like the speaker in the previous poem, he checks out, refusing to grant that anything positive (a birth) can redeem both of his losses (the death of his wife and mutant son).

Interestingly, both poems use time pieces as a central image. In “After the Green,” the sister’s body ticked / like a broken watch, arms moving staccato, / muscles jerking limbs to their own order. In “Home from Work, I Face my Newborn Mutant Son,” after he drops his son to the floor, the speaker observes how As he shatters on the floor, / everything from his heart to lungs / freezes like the hands / of a wristwatch at ground zero. These images suggest a human body that is damaged beyond repair, and again subtly suggest a connection between two dichotomous elements: the unpredictable human body, and the supposed predictability of a watch.

By the final poem, “Reading Comic Books in the Rain,” we see explicitly the main thrust of the collection. The speaker describes reading a comic in the rain, seeing the colors run, and wishing to Stave off Topeka, Kansas, / the whole goddamn world, by falling / into another one, and in the final line of the poem, to inhabit a world a page removed from our own. The speaker of this final poem wants to escape Kansas through the comics. The comic book characters that inhabit the poems want to escape their deformities through costumes and the use of their various powers. This hardly seems so different from poets and other artists who wish to escape to a new world, or at least a new vision of the existing world, through the various mediums of art. It is this theme of escape in the collection, seen through both the lens of the autobiographical and the make believe, that coheres the book and allows Jackson to place the art of poetry and the art of comics on equal footing.