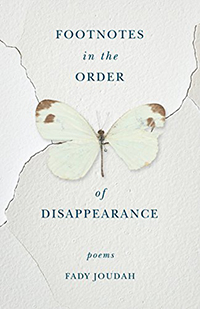 Footnotes in the Order of Disappearance
by Fady Joudah
(Milkweed Editions, 2018)


Footnotes are traditionally used to clarify information, provide details the reader may need to fully comprehend the text or offer definitions/explications of unfamiliar terms, people, places, or sources. They are also ordered numerically, in logical order of appearance in the main text. In this way, even the title of Fady Joudah’s Footnotes in the Order of Disappearance implies that what we think we know about the world will be transformed in this collection, that everything is ephemeral even if it is documented or explained. Perhaps this comes from Joudah’s knowledge as a physician that all corporeal flesh comes to the same end. But this collection is not a dirge for the end of things; in fact, it is the opposite. More than anything else, this collection seems to be an homage to the act of being alive and being seen.
The poems in this book alternate between simple narratives that reveal truths about human nature and complex lyrics that challenge the reader with unusual syntax, wild linguistic leaps, and spiritual allusions. It is a book of dichotomies, one where the specific scientific/medical language of the intellect is juxtaposed and layered with the more surreal and imagistic language of the heart. Moments of tenderness and suffering, of subjectivity and of objectivity, peace and no peace live together here, sometimes in the same poem.

Joudah’s reverence for and attention to the body are evident throughout the book. Several poems reference his medical training. “Progress Notes” moves from a description of the speaker’s own face to one of a medical school cadaver, ending with a revelation about mortality, “I had come across that which will end me, ex- / tend me, at least once, without knowing.” “Thank You” recalls a professor who held a memorial service for the cadavers. The speaker volunteers to recite Quran verses in Arabic and have the professor repeat them in English. The poems ends with a discovery and an appreciation for being seen, acknowledged.

“You didn’t notice it,” my friend later asked me, “the discomfort
in the room when you read?” I didn’t, I told him. “All I heard
and felt was how you, Professor, delivered. Every syllable, word.”

This reverence for the body is not just medical. One of the shortest and most powerful poems in the collection is called “1st Love.” In this poem, the features of the body are recited as a way of knowing, of recognizing the soul and the divine with the corporeal:

This idea of seeing, of recognition, is also significant in numerous prose poems in the collection, many of them complete narratives that unfold with layered meaning. “tea and sage” is a moving tale of love, time, war, and sacrifice. This story begins with “Dear poem, today I learned…” which gives the whole piece the feeling of a story being told to friends, perhaps passed down from person to person, recognizing over and over the people who lived it. “The Scream” is a deceptively simple but stunning description of a playground injury scene that makes the reader question what innocence and guilt look like. After the bloody-nosed child, the victim in the story, points out the perpetrator:

I questioned the accused and he seized into
absence. A nurse came and took Abel. I stroked Cain’s hair, his
frightened stare, gorgeous eyes, he was beautiful.

And in “An Algebra Come Home,” an immigrant fruit vendor in Paris has his samples of peaches either ignored or taken and eaten without so much as a glance, a word, or a thank you. Until the speaker sees “you,”

you waited as you chewed then picked four fruits, one for each chamber. He said,
“Gorgeous, you’re the one who’d mended my heart.”

Here again, the act of seeing. Of recognition. And here again the body, the four chambers of the heart.

The book is ordered in three sections, the second one being a series of collaborations with Syrian Kurdish poet Golan Hajii, composed in Arabic through a series of meetings, phone conversations, and emails and written in English by Joudah. One poem, “in a cemetery under the walnut tree that crows,” functions as mesmerizing ars poetica and testament to will with lines such as:

I found a needle and with it

I dug a well
dug and dug until I struck ink

[...]
A lantern came down on a rope that a girl held
I sent up the part of me that was light

The lyric beauty of Joudah’s poems is also something to admire. There is astounding sonic wordplay in poems like “Some Things.”

And complex combinations of medical, personal, sensual, and political language and ideas in “Footnotes to a Song,”

Echo has no compass: we trace each other’s dermatomes
No ecstasy without betrayal: not all who live in flames are saints
Great art needs no nation: in memory country size is one
Great nations need great art: soliloquy a mother tongue.

This collection causes the reader to ponder the body, its place in time and the physical world, and to return to the idea that is most lasting and necessary for survival—connection. The poem “non-terminal” says,

mercury
if it shatters

Like fire and ice and mercury, the poems in this collection undulate, crackle, and elude, all to ensure that the ridiculous and sublime delights and fears of the world our bodies inhabit do not go unnoticed.