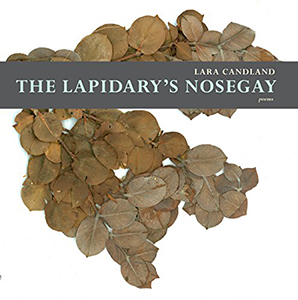 The Lapidary's Nosegay
by Lara Candland
(Center for Literary Publishing, 2018)

A lapidary is an artisan skilled at the cutting, polishing, and engraving of stone and gemstones for decoration and ornament, but also thereby refining and revealing previously unperceived facets of the material. A nosegay is a small bouquet of flowers, usually presented as a gift of affection and friendship, conveying, by the particular choice of blossom and hue, a symbolic message to the recipient, as well as the delight of color and fragrance. Emily Dickinson, invoked here (among others) as a sustaining and spiritual presence throughout this complex sequence of poems, filled her verses with thousands of references to both gemstones and flowers. For Candland, Dickinson’s poems are both mine and seed bank.

One can think of both Dickinson and Candland as lapidaries—mining language for opulent, unusual, even obscure words; carving and polishing them, and placing them in poems like jewels in carefully designed settings. But Dickinson was also a consummate gardener; her letters to friends and family are full of accounts of her efforts. She sometimes sent little gifts of pressed leaves, petals, and seeds. Indeed, she once referred to her small sewn pamphlets of poems as “posies,” another word for nosegays. Candland, too, is a horticulturist. Like any serious breeder of plants, she has saved seeds—hundreds of words harvested from the poems of The Belle of Amherst—and made many crosses, hoping for new hybrids with characteristics previously hidden in their genetic treasure houses.

By referencing gemstones—whose material seems permanent, but which can be ground to dust; and flowers, consummate embodiment of the ephemeral, but whose fragrance is one of the strongest triggers of memory and whose deaths yield the seeds of the next generation of blossom—both Dickinson and Candland invoke the shifting balances between body and ghost, mortality and immortality, presence and absence, intimacy and distance.

Each poet also addresses, via generally Christian citation and image, a felt distance from institutionalized religion and a closeness to the states of rapture and awe in raw experience of the world which seems the foundation of human religious feeling. In her introductory poem, “NOTES ON THE WRITING OF The Lapidary’s Nosegay,” here is how Candland characterizes herself and Dickinson:

sees me as a weak-hybrid-housekeeper

(which is) practically (n(o)) thing at all

The book is organized as a primer: sets of one or more poems whose initial letters traverse the alphabet. Each small section is introduced by the corresponding verse from The New England Primer, the first reading primer designed for colonial American schools by Puritan emigrants, among whom Dickinson counted her ancestors. Many of the texts in the Primer were lifted from the King James Version of the Bible, and to those same texts Dickinson also went for images and inferences, especially to the Book of Revelation for phrases and metaphors about jewels and gems. Implicit in Candland’s choice of structure is a promise to “teach us to read” in a new way, to reveal to the reader a different and shining language.

Punctuation is yet another facet Candland and Dickinson each called to their aid in crafting poems, but in very different ways. When Dickinson’s poems were initially published, punctuation was added by editors according to the common usage of the time, rendering them nearly unrecognizable, in some cases, and compromising or destroying carefully articulated meaning. Her originals eschewed punctuation almost entirely for small dashes, the occasional question or exclamation mark, skilled lineation, and a fine trust in the astute reader’s ear and eye.

Candland’s strategy is in some aspects opposite. She employs parentheses, in sets of one, two, three, seven, and three with an o! inside (there is a key to these markings immediately following the table of contents) to ornament/emphasize vowel sounds, syllables, words, groups of words, images, objects, creatures, and phrases. Sometimes these are collections of concrete nouns piled up chock-a-block like a dragon’s treasure hoard: ears, wings, angels, birds, butterflies, petals, sun, jewels. Sometimes they are Latinate abstractions—words for the real but invisible realm of the unsaid, unanswered, ineffable, prayer, ghost visitations, clouds, air, spirits, the Belle of Amherst herself. Frequently multiple sets of grouped parentheses will be arranged around/over/in a single word, or in multiple otherwise blank portions of the pages. This parenthetic multiplication can seem to scintillate on the page, as light does when it enters, bounces around inside, and exits different facets of a cut gem. Her use of irregular line length and placement on the page also forces the eye to almost constant motion, again as light refracts through the facets of a jewel. In some poems she also employs two small parallel lines of dots to symbolize stars, pearls, daisy chain, diadem, constellations, eggs, insects, and/or microbes.

the wind has already been ((murmuring))

If there are reservations, the first is that a work so typographically complex and visually difficult to parse is rendered in what seems to be a tiny eight- or nine-point font, making many pages fatiguing to read for any sustained period. The second is that this complex system of ornamentation eventually distracts too greatly from the beautiful, eccentric, quirky, and sometimes outright magnificent flow of the deftly original poems Candland has fashioned from Dickinson’s words. One wishes that she, like Dickinson, had trusted more in lineation and the finely tuned eyes and ears of her readers.

The question also arises concerning the nature of Candland’s enterprise as a whole. It is homage, certainly; but her enterprise seems a good deal more than merely that. It is a particularly daring kind of heresy to take on—in such a radical, fractured, and fractal way—one of the two poets (the other was Whitman) who irrevocably altered the way poetry was conceived of, written, and read in American English. Dickinson took, for a majority of her poems, the metered, rhyming form of the American hymn stanza (also used in “The Yellow Rose of Texas”) and stood it heretically on its ear with conversational diction; oblique rhyme; a phraseology based on human breathing; reassembling of grammar; wanton word invention; and a concept of divinity ecstatically trapped in its mortal creation, to and about whom she spoke as if god were one of the neighbors.

Candland’s linguistic manipulations are emphatically post-modern. Her characterization of this as the work of a lapidary is apt indeed—Dickinson’s own words the jewels, Candland’s nearly shattered, widely spaced lines and their typographical embellishments and adornments the setting. Candland has invoked and fashioned a sort of parallel universe where her own and Dickinson’s poetic and personal pasts and futures are simultaneous and coexistent—where flesh and ghost cohabit, coincide, and converse.
Posted by Sugar House Review at 2:28 PM