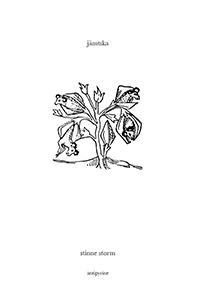 Storm’s recent books, the chapbook mainland and the full-length jämtska – of fluids and listening are minimalist poems, similar in style and theme. A Danish language review describes storm’s poetic style as “amerikansk,” while storm’s website describes her own writing as “hybrid language” and notes that it differs in form from dominant trends in Scandinavian poetry. The poems consist of thought fragments, fleeting images that seem slight on first reading but that conceal surprising complexity and unexpected relationships. In spacious, white pages the poet provides room for contemplation. Ideas become recursive as words and sentence structures re-appear. The best way to approach this work is to read slowly, letting ideas settle. It takes more than one reading for the whole to coalesce.

The chapbook mainland is storm’s translation of her own poem fastland (Copenhagen: Edition Afterhand, 2012) which she originally wrote in Danish. It is part of the Toad Press International Chapbook Series that focuses on English translations of avant-garde poetry. While mainland offers no parallel text, there is a visual clue to storm’s own concept of how the Danish and English versions are related. An illustration of a wild rose appears on the cover of fastland and a picture of a rose hip on mainland—the same flower in different seasons. With just a few words and phrases on each page, the poem offers soft breaths of images, but with a bite:

things we were thinking of
went through the room. They are sharp [acute/pointed]

as funeral and red wine

The sentence fragments form around images of hunting in a landscape populated by lurking animals, hidden in shadows and dens, running from smoke. A blundering human presence disrupts the scene, “shooting down things from the sky. (south) birds / and whatever else you can hit.”

Towards the end, the poet poses a question that contains a mysterious, unfamiliar word, “who sends you tupilaqs?” Unpacking the word “tupilaq” practically requires an ethnographic study. It’s a whole poem in itself. Tupilaqs are a kind of Nordic voodoo doll made by Greenland Inuits to kill a specific enemy. Carved from bones (sometimes human) or made from other body parts, a tupilaq can be given life force through shamanic rituals that include sucking on the genitals of its maker. Then it is released into the sea to swim away and find its victim. Tupilaqs are not always loyal. The victim can deflect the attack by re-enchanting the monster and sending it back to kill its creator. Nowadays tupilaq carvings are made and sold as objets d’art without the ceremonies that animate them into vengeance demons. So storm’s startling question might mean, who wants to kill you? But pulled into the present from 3,000 years of cultural history it might also mean, who sends you art from foreign lands?

Jämtska – of fluids and listening is a full-length book with a similarly minimalist poem written mostly in English with occasional Danish. For many English-speaking Americans non-English languages present a challenge. According to the U.S. Census Bureau only 20.7% of Americans know a second language well enough to use it in everyday life, let alone to read and enjoy poetry. Yet the choice of title indicates that storm intends the reader, whether bilingual or not, to grapple with language. “Jämtska” is another Nordic word loaded with metaphor, though for English speakers the meaning is not obvious without first performing an act of translation. It refers to a Scandinavian dialect spoken in the Swedish province of Jämtland, which may or may not be considered its own language. While Jämtska speakers have asked the Swedish government for recognition as a separate minority language, the dialect is nonetheless intelligible to people fluent in Standard Swedish. Metaphorically, Jämtska is a foreign language that one can nevertheless understand. The principle comes into play on the first page with lines written in Danish, confounding English-speaking readers except for one startling English phras, “sacrifice zones.” Scanning the Danish for cognates turns up a few words close enough to convey meaning. Atomprøvesprængninger.  Atomic testing. Amerikanske vest. American West.  It seems that while the Jämtlanders have been demanding recognition as a distinct cultural group, transitory Americans have bombed their own desert into oblivion.

Not all of the images are solemn. Storm is playful with language, sometimes even jocular. She translates and transliterates her thoughts to produce compelling new images out of the empty spaces in between language. In a section labeled “cellar” two people are arguing in colloquial English about going down in the basement to turn on the furnace. The conversation is funny. Even with no physical description of the cellar, you can imagine someone not wanting to go down into that spooky, spider-infested place,

i’ll show you the cellar and the pilot light. you say i don’t wanna see the cellar.

—if you wanna stay warm in winter you wanna see the cellar. you say i
wanna be cold

What is lurking in that cellar? Despite the humor, the fragment leaves an afterimage. Somehow, you can’t reach a state of warmth and comfort without first passing through some dark and menacing place.

In “blushing,” storm follows a Danish language fragment with a mischievous confession, “i like rephrasing your questions.” She uses rephrasing as a poetic device throughout as in “birds (10/1)” a straightforward account of avian migration, the reaction to a dream of the snow to come, “it is not the cold of winter it is lack of food that causes their long flight some will stay / here as they are unable to make the distance.” The description is reworked in “birds (10/2)” to internalize the meaning of the thought,

The person who would rather be cold has been transliterated into a bird that would rather be hungry, into a thought that would rather stay home. The vision seems to represent grounding in place, or perhaps a fear of leaving, a shared nativeness that is strong enough to give rise to its own language, or more accurately its own jämtska.
Posted by Sugar House Review at 2:56 PM