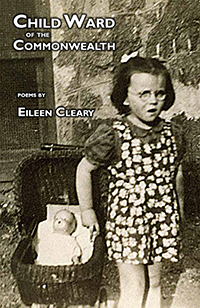 How to tell the truth when the truth hurts? How to open a wound that’s been scabbed over? Eileen Cleary, author of Child Ward of the Commonwealth, knows. In her debut, autobiographical collection of poetry, she tears at the wounds and traumas of being a child ward of the state.

It is important, as humans, to feel another’s pain so we may understand the universal connection we share. But it’s also necessary, like a good cry, to share in the relief. Child Ward of the Commonwealth is this poet’s relief.

She shares with her readers some of her bleakest moments, such as when she recalls hiding under a table in “On What to Forget” while her sister was caught in flames:

rushing past and then,

the afghan he uses to smother

because you did nothing, you

While doubt and guilt resonate throughout, Cleary thankfully trusts her readers enough to include these devastating times, allowing us to help carry her pain like a dead baby. The clarity with which Cleary writes tells us she understands the sacredness of sorrow and fear. Her stark cinematic imagery forces the reader’s attention to see, really see, what it must be like to feel such loss. She brings us to the scene of when she was taken away in “When the Social Worker Took Me”:

Mom wears a sundress in December,

rocks herself to sleep. I watch…

from my hair, toss and catch

a puppy on the stairs—

We hear the confusion further on in the poem with the question, “are they scared / by the poor?” and her wondering why the neighbors stay “shut behind their doors,” call her “feral.”

In other poems, we’re able to walk with her to school, following the “cloud-breaths” to feel the chill through the “double thin shirts,” to slurp noodles “straight from the pan,” leaving the reader, too, hungry for more.

Fortunately, Cleary continues to feed her reader extraordinary images throughout the book. “A sack dress, its jute thread emptied of potatoes,” or five kids stuffed in the backseat of the car “like boots / into bulging luggage.” In “Foster Child” we see her left to “stuff liverwurst through porch slats.” In this poem, we also learn the author lived in multiple homes, shared multiple names. Now, as an adult, it’s obvious she’s found her home in poetry. Steadfast in her writing, she is concise, careful not to take up too much room—an economy it seems she learned being a ward of the state.

As a reader, it’s difficult not to become attached to the little girl, especially when you read of her yearning in “First Germantown Summer Without My Mother”:

Crisscross applesauce at the lawn’s edge

I want to feel her core, to hold her

soft dough of her. Bring her.

Yet, this girl, while timid and insecure, is anything but weak, as illustrated in this excerpt from “Sea Wings”:

Despite the sadness that’s present throughout, there’s a confidence in Cleary’s craft that is admirable. This is evident in her trilogy of “Child Ward of the Commonwealth” poems—“The Removal,” “The Living Through,” and “The After”—which serve to provide subtle section breaks to the collection’s chronology and illustrate the dynamic voice that Cleary sustains. This is also observed in her series of “Jane Doe” poems, taking on the persona of a girl without an identity. The repetitiveness of these titles anchors the reader and provides safeholds amidst the disturbing content that follows.  Her use of the persona poem is apt, as in “Come Back Jane Doe,” where the desire to forgive is clear:

There’s comfort, too, in her lyricism, often because of her prosody and rhythm. They are, however, so subtle you might miss them, hiding within the disturbing scenes, such as this one from  “Jane Doe Becomes That Which Surrounds Her”:

If found in the grasslands or the wild,

her given name’s as blameless as the skies.

She’s the bluest iris if she dies with child.

If no family claims or tries to find

her afterwards, the cypress names her kin.

If she’ll never grow to woman, she stems

No matter her address, no wren condemns

her or the carefree yarrow where she lies.

Or in the mushed sounds of “Hurricane Provisions” that create a sense of togetherness:

Me and my little sister

out in a flood,

to buy food with nickels Dad

missed in his rummage

through the couch to buy his gin.

Or here, in “Leenie’s Ginny Doll Speaks,” where her choice of mixing hard with soft vowels allows space to feel both the heaviness of despair and the lightness of hope.

God calls me by name

Just under my paint-brushed hair.

A refugee from the state of empty air.

Though quiet in voice, this verse calls attention to the forlorn, the neglected, and the abused, but also to the survivor. This voice has been silent for too long and is ready to be heard. Resilience resonates on every page. The reader is taken from that scared child hiding under a table, to the hopeful little girl in “Dear Mummy” asking her mother to come get her, to the woman who has become a hospice nurse helping others process loss in “Rounds.”

Child Ward of the Commonwealth will haunt the reader with its composed and graceful spirit. Cleary had no control over being taken away as a child and placed in foster care, but these poems, now, are hers and no one can take them away. Fortunately for us, this poet is here to stay.