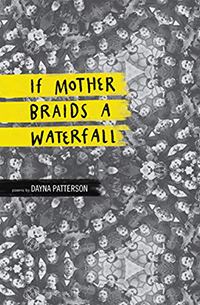 A poet’s vocabulary is more than a tool, more than personality. Its origin and culmination are familial and cultural. Dayna Patterson grew up in a bookstore, a devout reader, a Mormon girl of polygamous ancestry who served a mission for her church and who was thirty years old when her mother came out to her.

It slips from your mouth, Mom,

hits, finally, in the clothing store,

Although her mother’s truth is vital to this collection because it leads, as Dayna says in her virtual book launch on May 23, 2020, to her own “de-conversion from Mormonism,” only two poems of 52 in the book are for and about her mother. They are enough. The plain speech of “Revision” (above and below) lays out a daughter’s confusion and sorrow:

made me a person you couldn’t tell.

“Revision” describes the coming out as an “earthquake,” with “whole mountains / made low.” In the next poem, “Dear Mom,” vocabulary builds and the mountain metaphor contracts to a musty cave, wherein a clawed beast avoids the bleak, white season of not yet knowing.

December lady, the day you came out to me I was in my

hibernacle, so comfortable in the warm smell of my own

pelt and the cave’s dry envelope where I slept in a ball.

Teeth and claws bared, the “startled” daughter-beast does not want to hear the “news,” but her mother “took me by the paw,” taught her daughter “to forage / for winterberry,” taught her about pain and compassion and forgiveness. “I took off my thick coat, felt cold’s blow, what you’d borne these / hush-mouth years,” and knew “no need to devour your heart.”

“Hibernacle” seems to be a melding of the words “hibernate” and “tabernacle,” both steeped in cultural meaning. Many words in this volume seem as though they might be coined from the author’s trove of words and concepts, but look them up. The most interesting and mysterious are real artifacts from early Mormon history, such as the architectural terms, “hunky-punks,” “oubliette,” “claire-voie,” or terms from Star Trek, such as “Betazoid empathic powers” or “Pon Farr,” the Vulcan time of mating, veiled in mystery and secrecy, much like Mormon temple rituals.

Ritual is a recurring element in the collection, as are the earthly elements of Mormon culture. Precious metals and everyday minerals are as varied as diamonds to motes of dust or golden nuggets to salt crystals. In the first poem of the book, “The Mormons are coming,” ancestors “donated their / china for crushing to make the temple’s stucco sparkle.” They “pass silver plates of torn / Wonder Bread.” Or “they arrange a / room of plinths with the bronze busts of their prophets.”

Ancestors are as prevalent in the poems as minerals, some of them recurring in a series of letters from the author, others appearing only once, but with lasting impressions. In “Contrails,” a deceased grandfather causes Dayna (the author is the speaker in many of these poems) to ask “What is the truth?” She speculates on the idea of a “gentle, pearlescent heaven” that pretends to “soften thoughts of oblivion.” She wonders if elements of her grandfather might somehow remain, “leave / pieces in our memories like glowing stones?”

The “glowing stones” call to mind the Urim and Thummim, said to be ancient seer stones through which Joseph Smith translated the Book of Mormon. They recur later in the book, in the culturally and historically expansive poem, “Former Mormons Catechize Their Kids,” with “Joseph Smith peering into a dark hat at the / peep stone, words floating up to his eyes in / phosphorescing light.”

Joseph Smith and his brother Hyrum Smith get death masks in the book, and Brigham Young, another early prophet of the church, is named only in reference to a chronological list of his 55 wives. The real punch in the collection is not its rightful dressing-down of a strong religious patriarchy, but its rebellious matriarchal revelry in regard to the “Heavenly Mother,” of whom Mormon prophets say their members must not speak because she is “too sacred.” This rebellion begins with poems of reverence toward her pioneer grandmother, “first kin to convert.”

my feet wouldn’t fit your winter

shoes, my waist would burst

I slip on your secondhand cotton,

shoehorn into your leather.

Imagining her grandmother’s life means imagining why she would convert to a church that asked her to travel far from her home country. With “better marriage prospects” and the promise of no more “whiskey prints on your wrist,” along with “golden plates,” “and the spillway of heaven,” Dayna asks, “what part of you could resist?”

In “Dear Ellen, 1855,” the impact of pioneer life leads to more questions about Grandmother Ellen from Dayna, whose middle name is Ellen.

On the clipper ship Charles Buck

I wonder if you carried a spider

in a walnut shell for luck, or if your new faith

Did you keep your children

and wagon covers for the trek?

At least you and yours were whole—

until Mary Ann tumbled from the wagon.

The oxen pulled the first wheel

over her chest, puncturing lung,

the hind wheel over her jaw, shattering bone.

Did her disfigured face make you ask,

What are you up to, God

Questioning the faith in which Dayna Ellen spent the first three decades of her life, has given rise to a book rich with doubt, resolve, and praise. The Heavenly Mother, of whom Dayna was forbidden to speak, is now named “Eloher,” a feminine god. She is “Mother,” who “has a Degree in Exterior Design,” and she is “a shrine,” “a book,” “the One and Only,” who

in a country where no one speaks

Except for Dayna, whose extensive vocabulary and lyrical narrative dares the mystery and secrecy of a religion she has cast off while it embraces the quirky, sexy, comforting, and exasperating culture in which she still quite happily belongs.

As she told attendees at the book launch, she began writing poetry in earnest as a young Mormon wife, when she and her husband could not conceive a child. But she did not write as therapy (and they did eventually have children), even when they left the church together. Through it all, she says, she hoped her writing was “elevated to the moment of art.” Oh, yes. Every page, every line.