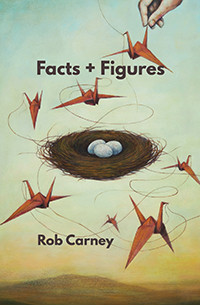 In this particularly rough patch of American anti-factual post-reality, it is heartening—if not the keenest form of bliss—to come across a poetry collection such as Rob Carney’s Facts + Figures. We all know those lines from William Carlos Williams: “It is difficult / to get the news from poems / yet men die miserably every day / for lack / of what is found there.” So, what is found there, in the poetry? In Carney’s case, a first-rate listening, a strain of gentle prophecy, a full-on process of myth making. Moreover, all of this is true, the poet himself announces in “Fact 1,” the book’s opening poem. And frankly, thankfully, it is.

Divided into five sections, the book traverses earth, ocean, and sky, dealing in the fins and wings of this world while highlighting the scope of what awaits, of what could be. The first section of the book, “Thirteen Facts,” comes in the form of prose poems spun from a voice both humble and wise: “I know what I’m talking about: lightning strikes are memory—sometimes sharp enough to sheer off branches—and rolling clouds are bison.” The poem “Fact 10” exemplifies the section’s leitmotif: the fragile dance between creation and destruction. Here is that poem in its entirety: “Now that orchard is a golf course. Money always wants a water view. If you’re ever there, putting on third green, that’s where we were.” Some of the these “facts” get broken into different parts, splintered into monostich: “No love means no Creation Story.” Or split into a single word against the page-scape, thus:

The main heartbeat of the book drums out the difficulties of living in a world insufficiently buoyed by ethics, empathy, and awareness of beauty—the stuff Carney’s work boasts in super abundance. Such a dearth-based society has surely lost its way, the book suggests, and the arc of its poems aims to inform and reconceive, through drafting new, more compassionate calculi. In section II, “13 Figures,” the poem “21st-Century Math Exam” (by my reckoning, one of the strongest pieces in the collection), grapples with, among other things, “7 Payday Cash-Advance Lenders and a handful of stations for Auto-Emissions Inspections, / x   no doctor’s office, no shoe store, nowhere to swim, / + all the neighborhood housing is rental, / – I.C.E. keeps taking people.” Even so, the creator-fervor buried in these words—indeed, some of the later poems’ robust whimsicality—serves to ease our collective despair. Take these lines from one of several fourteeners in section two:

After They Resurrect the Mastodon,

I hope I win a golden ticket

‘cause rides are awesome, but who likes waiting in line?

Imagine the view from atop its shoulders—

all the way to the parking lot,

And eye to eye with the mastodon balloons

that pretty vendor is selling.

In a former life, she was a lifeguard

but dropped that to be a part of history.

I want that too,

my name below a photograph

The book features sustained figurations of childhood memories and themes, none of which, the poet admits, “comes with citation, of course, / and I’ve had to fill in most of it myself.” Midway through the book, the poet finds the homework of a boy named Jesús Valenzuela. This particular series of poems rings with an intimate, disarming lyricism: “But why was your backpack scattered in my yard? / And where’d you go?” Fueled by wonder, amusement, and dismay, these poems do the difficult work of hearing what is real and making the saying look easy:

but I hope wherever it is

you get to be a kid,

and someone is showing you which dot is Mars.

My own son says he wants to go there,

an empty rock without Christmas trees,

and he’d walk eight years without seeing a river or cat.

The poems in Facts + Figures come to us in varied modes and formations (the blue jay’s Screek!, the “green scents carried from the north”), at myriad velocities (the fox’s zigzag, the bear cub’s future: too soon, too soon), and in a variety of attitudes (“Because Summer Has Fourteen Kinds of Orange,” “It Only Looks Like Leaving to Someone Standing Still,” and “Not Your Olden-Days Wolf[!]”). Even so, the book reads like a whole note struck and held, start to finish—each poem formed, in the poet’s own words, by “the shape of possibilities.”

Diane Raptosh’s fourth book of poetry, American Amnesiac (Etruscan Press), was longlisted for the 2013 National Book Award and was a finalist for the Housatonic Book Award. The recipient of three fellowships in literature from the Idaho Commission on the Arts, she served as the Boise Poet Laureate (2013) as well as the Idaho Writer-in-Residence (2013–2016). In 2018 she won the Idaho Governor’s Arts Award in Excellence. A highly active ambassador for poetry, she has given poetry workshops everywhere from riverbanks to maximum security prisons. She teaches literature and creative writing and co-directs the program in Criminal Justice/Prison Studies at the College of Idaho. Her sixth book, Dear Z: The Zygote Epistles, was published by Etruscan press in July 2020. DianeRaptosh.com