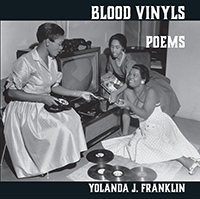 In African American traditions, where there is abjection, there is also music. From slave music to hip-hop, African American music has offered a blueprint for survival. For poet Yolanda J. Franklin, music can be a joy as poignant as a raised fist against the face of atrocity. Her debut collection, Blood Vinyls, suggests that writing about Black music entails confronting the bloody legacy of American history and its politics of Black representation, as well as contending with the violence and abuse in one’s own family history. While the white appropriation of African American traditions and the misrepresentation or erasure of the Black voice haunt the collection, Blood Vinyls is both fiercely intelligent and alchemic in its capacity to take the violated and appropriated Black voice and reclaim her as an agent of meaning.

African American music, as Franklin figures it in Blood Vinyls, is both bond and crossed boundary. It’s both salve and a salvo, as well as a foreground and a background. It resurrects past communities, and serves as memory, memorial, and mnemonic. A life force, Franklin’s music is also a counterforce, a turntable or a revolutionary terrain in which the poet remixes and undermines the voices of white supremacists, past and present. In Blood Vinyls, a square-shaped book that mimics and pays homage to a vinyl cover, Franklin embraces all these musical resonances and more throughout.

Franklin is a Cave Canem and Callaloo Fellow, a recipient of a both 2016–17 McKnight Dissertation Fellowship and a Kingsbury writing award. A third-generation Florida native, she’s deeply invested in a poetics of place and the buoying, communal impulses of African American womanist traditions. Under the threats of annihilation and cultural erasure, many Black artists like Franklin have had to not just radically reimagine racist clichés, but also be historians to their community, literate in all the ways the dominant white culture obscures and misrepresents those who live on the margins.

In her poem “Black Writer,” a wry remix of Tony Hoagland’s “White Writer,” she writes, “I know that Black readers too need to see their lives reflected on the page— / (re) memory and vinyl; the fear of vanishing.” However, while the poet-speaker recognizes the political exigency of representing Black history in a country marked by amnesia about the rape, murder, and enslavement of Black people, she expresses ambivalence about the role of the poet-activist as well in the same poem:

[ … ] you will start to feel like the rite of blanket cliches
are all you’ll ever right in this world.
And gradually,
throughout the picketing for

contentions coloring who you are

These final lines act as a reprisal of the last lines in Hoagland’s “White Writer,” in which the white speaker addresses the apparent futility of writing in a world that recognizes one merely as a racialized writer, one who is essentialized and marketed according to their racial designation. Of course, a white writer is not racialized in the violent ways of a Black writer, nor is he subject to the methods through which the gatekeepers of publishing industries exclude or tokenize Black writers. For Franklin, as a Black writer, to “right” a cliché involves rebuffing the psychic violence of misrepresentation and erasure, but it also involves engaging—perhaps at her own expense—a white audience. The speaker’s slippage of “whiter” and “righter” in the poem suggests that whiteness is the stumbling block that the Black writer must contend with, whether it be in the form of white exclusion, erasure, or stereotyping before one can write “righter and righter”—implying a form of writing that earnestly embraces accurate and ethical representation.

In “White Room Syndrome,” Franklin imagines Kenneth Goldsmith’s racist representation of Michael Brown, in which he read the murdered victim’s autopsy report and closes his poem with the image of Brown’s genitals. White American culture has long been obsessed with the consumption of the dead Black body, a fixation that spectacularizes while also normalizing the violent underpinnings of a tradition that includes lynching, slavery, and murder. As Elizabeth Alexander writes in her collection of essays entitled The Black Interior, “Black bodies in pain for public consumption have been an American spectacle for centuries. This history moves from public rapes, beatings, and lynchings to the gladiatorial arenas of basketball and boxing.” Goldsmith’s double violation is another kind of murder. In the last section of Franklin’s prose poem entitled “Eating the Other,” referring to the white consumption of the Black body dead or in pain, she writes, “call it poetry, work, avant-garde, uncreative neo-racism or necromancy. They will take the body again and again and again.” Poetry, slyly slipped into the same catalogue that includes neo-racism and necromancy, is un-innocent, another grammar of psychic and linguistic violence. But in the right hands, it can be redemptive.

Schooled in the traditions of a western market that white-washes the unique experiences of people of color, as well as the mythopoetics of Black poetry and music, Franklin imagines art as transportive and transformative in the face of racism and generational trauma: “the job of the artist is not to leave you where she found you / this art requires gentrification.” Dynamic, textured with blues rhythms, jazz, bop, and found poems, her work is lively, demotic, and deeply political; as well as idiosyncratic in its highly imaginative formal permutations (think of Gwendolyn Brooks’ formal genius mixed with Claudia Rankine’s capacity to cast found material and the experiences of daily life into prose poems that offer visceral and temporal impacts and insights). One can also detect the influence of Frank O’Hara’s capacious eclecticism in these poems.

Indeed, there is astonishing vocal and formal range in Blood Vinyls, as well as high-powered energy from one poem to the next. “Double Dutch Bust,” “Manual for Still Hunting White Tailed Deer in a Gated Community,” and “White Room Syndrome” are just a sampling of the poems that continue to haunt me long after reading them. A poetics of polyvocality, snappy American idioms, and a discursive versatility, Franklin makes visible “the [m]iracle of the [b]lack [f]emale[p]oet”. Channeling the voices of her literary forebearers Phillis Wheatley, Lucille Clifton, and June Jordan, Franklin writes in her found poem:

Forging literary sociality out of mutual resilience, Blood Vinyls is an other-oriented text that finds recourse from the psychic violence of white supremacy in an intersubjective poetics, one that hearkens back to major African American musicians and poets of the twentieth century. One will find that the most oft-repeated verb of the collection is “to know.” Franklin’s emphasis on knowing as an epistemological currency may be read as an investment in the communal, where knowing is based in collaboration and in reimagining, rewriting, and testing out one’s knowledge in tandem with the other.