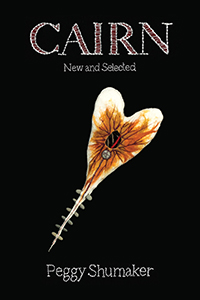 The title of Peggy Shumaker’s Cairn: New and Selected suggests a book that will offer direction and reflection and perhaps homage. This is only fitting, since cairns are manmade stacks of stones used since prehistoric times as navigational aids on land and sea as well as for monuments, burial sites, and prayer. In this, her eighth book, Shumaker stacks words to serve as messenger and guidepost for our reading while she explores topics including nature, myth, friendship, parents, growing up in Arizona, and landing in Alaska as an adult, where among other honors, she served as Poet Laureate 2010–2012.

Shumaker’s latest collection begins with “New Poems” where “Parenthood Unplanned” tells in blunt poetic lines of parents who were “mismatched // spectacularly” for marriage. Without sentimentality, these poems poignantly describe several colorful, flawed characters who populated a woman’s youth. Shumaker pays homage to women starting out in challenging circumstances, such as a mother described in her youth as “that brilliant // ragged girl.” The poem closes with a feminist plea, particularly for women like the girl who became the mother, “let women live. // Let women be.” Because of the lyrical prose memoir at the end of the book, these poems that come earlier in the collection seem personal and striking.

The first large section, “Placing Our Feet with Care on This Earth,” is full of poems regarding another poet who suffered a severe stroke that impacted her communication skills. I was fascinated with these poems because of my own training as a speech-language pathologist. In “Shape-Shifters,” Shumaker expands from personal concern and observation of the patient’s disability to a more abstract question, one of grief:

shattered sounds not yet
nor ever connected.

Why? The best guesses
still guesses, microscopic.
Who are we without sounds
someone we love can translate

into us,
into what we know

These poems honor recovery as the fellow poet works to regain her life after the stroke. In “A Meditation,” Shumaker writes of the woman as she regains mobility, “come closer. Ask your foot to widen / as it meets the floor.” As the woman relearns communication skills, the poet writes, “touch your tongue / to your teeth” and finally, “Relax / until language remembers you.”

Recovery and resilience are recurring themes in the book as the poems describe a complicated childhood, filled with, at the least, neglect. This section speaks to a woman’s effort, strength, and healing. “Commonplace Miracles” begins “thanks for impatience / married to dogged will, // gratitude for grit.”

The next section, “Sparks,” represents an ekphrastic collaboration between Shumaker and Alaskan artist Kesler Woodward, who created their respective poetry and paintings in response to one another’s work. The partnership culminated in a 2015 exhibition at the Alaska Humanities Forum in Anchorage. Woodward’s boreal forest paintings are rendered in crisp color in the pages of Cairn.

In “Geology of Wonder,” Shumaker celebrates forces of nature as well as a relationship forged by a friendship with Eva Saulitis, a poet and marine biologist who died of cancer in 2016. The first verse begins, “shaped by forces way underneath,” and ends “this mountain changes each breath.” Such lines equate attributes of nature with characteristics of those she loves in a kind of elegiac magic. Shumaker pays homage to long relationships with short poetic lines, finding solace in repetition, and the mountain, where:

When we’re on it,
our focus shifts
to scree underfoot,

to a shady cornice
overhanging our steps,
to a patch of lichen

In a later section, “Impossible Grace,” the poem “Eva’s Cairn” speaks about a basket of blossoms, how “orange yellow fuchsia white, gather / beside the cairn stacked up / to honor our friend.”  This poem refers to a Valentine’s Day trek on the big island of Hawaii to create a memorial cairn in Eva’s honor. Once again, stones act as monument, messenger, and guidepost.

Various poems throughout the book lead a reader to ask how a person develops resilience. One answer is suggested in “The Story of Light.” We read about a woman “who first touched fire / to a hollow stone filled with seal oil,” how in her youth, the elders let the woman raise an orphaned seal pup. The poem ends with a taste of Shumaker’s use of rhyme, assonance, and repetition, all enveloped within metaphor:

The pup lifted her nose, licked
salt from seven stars, and slipped
light back among silvers and chum
light among ghostly belugas
swimming far north to offer themselves.

Many of Shumaker’s poems are entrenched in place, such as “The Run of Silvers,” set in Alaska’s Resurrection Bay. We watch salmon, “their potent ballet—muscular / dazzling leaps in the blinding / sparkle of an air they can’t breathe.” Indeed, these poems pack a descriptive and metaphorical punch.

Shumaker uses anaphora well. A perfect example is the beginning of verses in “Each Rise, Each Hollow,” in which she infuses a loving relationship with a healing cadence:

You have taken me
fifty feet under, swimming
with eagle rays, while
humpbacks above us
sang their way south

Weaving human story within and beside nature poems, Shumaker uses naming of people and birds as blessings. We read of swallows, tanagers, toucans, and macaws; as well as trees, mountains, and other wildlife. One poem, “Genesis, Quetzal,” resonates with earlier poems of loved ones transitioning to death. It ends:

When you push off,
earth gasps and sighs.
Your wings stir

root aromas tangled
underfoot. When you push off,
cloud and sky

reshape around you.
When you push off,
a new world spins.

Shumaker’s book ends with prose—short memoir pieces from her book Just Breathe Normally. Some harrowing, many sad, the memoirs form a cohesive, engaging narrative of her youth. The memoir affirms that much of the prior poetry was biographical, that the speaker survived, thrived, and has contributed much to the world.

The book begins with poems about friends who deal with major medical setbacks. The surprise bookend comes toward the conclusion of the prose memoir when Shumaker tells of experiencing severe injuries from a bicycle/ATV accident.  Symbolically, in “Día de los Muertos, Whidbey Island,” Shumaker and her husband “choose Day of the Dead for our first post-wreck ride.”

They take deep breaths attempting to regain balance on two wheels, a moment that makes the reader hold their breath until the book ends joyfully, “we push off, wobbly, into the rest of our lives.” In that moment, all the themes of Cairn resonate resiliency and recovery along with the nourishment of language and relationship. Shumaker’s collection is a cairn of a book worthy of a slow, celebratory read.

Posted by Sugar House Review at 8:00 AM