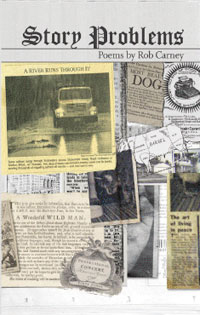 reviewed by Anne Shifrer
Rob Carney’s Story Problems is a lively collection full of spontaneity and ebullience. Difficulty gets whisked away by celebration and humor in poems that consistently reach for pleasure rather than pain. Carney’s other poetic mode, satire, takes aim at religion, conventionality, and human stupidities such as greed and environmental destruction.

These two flavors of poetry—sweet and acidic, if you like—can be illustrated with passages from two poems that comment differently on religion. From “Recommended Daily Allowance”:

may there always be corn in Nebraska,
and bees for honey on our cornbread,

and cherry orchards in Washington,
and the alchemy of smokehouse and barbecue. . .

bless us, O Lord, and these Thy gifts.
And bless others. Bless those who are hungry.

And move us to do as much as rain does, as daylight.
Amen.

Contrast the above passage to this passage from “You, You Goliath”:

What you’ve got is an empty pocket not something glorious for me.

So why do you want to put the world in a headlock?
Why do you assume you have the key?

You can keep your cosmic cruise ship. I’m happy with a kayak
And anyway, I’m busy now: going out to show the kids how to slingshot rocks.

The dramatic tonal differences of these poems suggest Carney’s range. They also reveal voice and style: the voice with its saucy directness, quips and quirks, and lyrical interludes and the style, liquid and lilting rather than compressive and subtle. Ease of expression governs the poems. The opposite of hermetic, multi-layered, and cautious, Carney’s poems are insouciant and open—perfect for performance.

While Carney has a great sense of humor and is quite clever, his critiques of religion and politics sometimes take on beliefs and behaviors that are adequately self-mocking, resulting in poems that risk seeming sophomoric as in the ending of the poem “Politics.”

Okay, then, let’s vote:
Who thinks God is on their side?
Gee, what do you know,

it’s unanimous.
Now would everyone please shut up?

The finest poems in the volume have none of the heavy-handedness that occurs when Carney shadow-boxes with the more obvious lunacies of religion and politics. “Where Everyone Goes for Answers, But,” for instance, ponders the big questions, but it challenges the formulaic answers of religion with its own depth and complexity, creating a more effective poem using indirection rather than the direct punch.

it’s a quest because of the questions.
That spirit, or love, or that axe in your hands

isn’t there. And what good could these do? —
you can’t attack emptiness, or split it into firelight,

the pleasure in these isn’t math—
like this woman’s beauty, or a man asleep by his son ...

No, emptiness was always, and emptiness is always.
Anything you find there, you brought along.

This provides a more compelling (and kind) rebuff to the missionaries at the door than does the icon bashing and sarcasm. Unlike those tactics the above lines invite lingering. “Where Everyone Goes for Answers, But,” is admirable in every way, with its elegant couplets, its pregnant line and stanza breaks, its pacing, its overall depth and thoughtfulness. It’s a poem you stick on your wall.

That Carney honors mystery and demands it be respected is a poetic stance that
itself deserves respect. “The Mole Measures Profit and Loss”—belying, perhaps, the whimsy of its title—is a poem that makes room for mystery.

There’s a tunnel in my closet that runs from the house,
under the yard, then deeper,

past moles’ bones,
deeper than mine shafts and bedrock,

deeper, to a secret lake,
whose water tastes like the night the world was born—

like a fist: so cold it knocks the wind out—

The poem’s lake permits neither boating nor exploring, neither birds nor sandflies, not even sand may rest on its shores. It’s for drinking alone.

That way, I can’t carry it back,
can’t bottle it all for myself or for sale

Whatever the speaker finds cannot be taken back for personal inebriation or for sale; it can only be known and experienced in the eerie down-under of the dream. As in “Where Everyone Goes for Answers, But,” whatever wisdom is found is indelibly shaped by the knower upon an emptiness that won’t answer back.

While Carney is thusly respectful of the unknowable, he’s an exuberant and exhilarating myth-maker. Perhaps my favorite poems in the volume are the origin stories, poems about how this or that came to be, told in the manner of America’s First Nations. The volume provides this form or type of poem—called “fables,” “parables,” and “Old Songs”—in delicious abundance. The myths Carney fabricates aren’t presented as alleyways to truth but as catalysts to wonder and astonishment as in “The Woman Who Gave Blackberries to the World.”

[ ... ] something strange appeared
in a widow’s yard. At first, nobody noticed,

or they pretended not to see.
Even ants, in their disciplined lines, marched right around.

It rose from the ground above some loneliness she’d planted
tall enough already to cast shadows, snag fog [ ... ]

[ ... ] the strange plant had spread, had overgrown her fence,

cast vines and thorns like fish nets, so in the Old Songs,
they decided to ask her to leave. But just then,

children saw the blackberries. And tasted them. And ate,
and couldn’t stop, no matter how scratched they got, and it was good.

And people came carrying baskets, telling stories.
And the woman was no longer all alone.

The poem’s implicit metaphor—the resemblance between loneliness and a thorny bush protecting sweet berries—is an inspired comparison, one that both child and adult might ponder. So many of Carney’s fabulisms set their mark and make it, creating poems that are wildly imaginative, yet charmingly simple, poems that are fresh and unpretentious. In his myth-of-origin poems Carney’s talent is on extravagant display—not only his inventiveness but also his capacity for a lyricism that genuinely moves the reader. In his capacity to poetically re-imagine how the world came to be, Carney helps his readers fall in love with it once again.
Posted by Sugar House Review at 3:14 PM