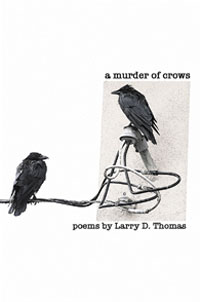 A Murder of Crows by Larry D. Thomas

Texas poet Larry D. Thomas is as keen an observer of the natural world as any of America’s best Regionalist poets. Pervading the heart of A Murder of Crows, Thomas’ sixteenth collection of poems, is an intensely rich, imagistic evocation of the life of birds, an articulate vision that enables the reader to cross into a phylogenic hinterland.

So positioned, Thomas witnesses intractably arrant realities, a world re-inscribed in crisp, penumbral language exemplified through terms such as “black angular presence,” “utter darkness,” “looms there in stark solitude,” “sonata of darkness,” or “a world beyond the sun.” Even “a canvas of blue sky” is laden with a coal-black portent. One may even place Thomas alongside certain European Expressionists, particularly in their use of synaesthesia to merge or blur metaphoric borders of the senses, combining them in a single image—that deliberate creative expression, consciously developed by writers, particularly in the Expressionist and Keats traditions. We see this, for instance, in “Blackbirds,” their “blue- / black cacophony / of terror, / a choir / of wildest eyes,” and likewise in the “savage cerulean scream” of the golden eagle, in “Raptor.”

Thomas arrests us through an immersion in the sensual, often violent, aesthetics of the sublime, an element that drives the intelligence of raptors and scavengers alike. In “Unabridged,” Thomas cites the crow’s “genius // with a perfect IQ / of instinct.” In “To Sight a Bunting,” this variety of passerine is plagued by starlings which “settle their voracious breasts / on straw still warm / from the slaughtered dead,” the dead being the bunting fledglings murdered by the starlings and shoved from their nest. To complement this scene, on the facing page we see the shrike, “weighing in // at but an ounce / or two, / ... / impaling your prey // on barbs and thorns.”

The artistry of such language traverses and melds with other art forms, offering the reader resonation across various mediums, particularly painting. In “Sanderling Chick,” the flurry of the bird’s legs immediately recalls Duchamp’s Nude Descending a Staircase. In “Great Blue Herons,” the opening lines, “They stand so still in the shallows / it’s as if they’re outgrowths / of the river itself,” hold a mirror up to Cubism’s intersecting surfaces. Thomas speaks even more directly to the painter in “Raven (oil on canvas by Otis Dozier),” noting the late artist’s apperception, “What life there is / is silent, solitary / against the vastness // of place, locked in the black, / angular presence of a raven.”

Thomas opens his compilation not with a grand raptor but with the lowly sparrow. Here, he turns any deceptively diminutive view of this pedestrian species on its head, pointing us to “its world where survival / by the minute is enough,” this beast all-too often beholden of “cold, hunger, or the brutal / amusement of a cat.” Similar to the sparrow, Thomas does not leave out the unexciting “Pigeons,” that bird so woven into human folklore. Thomas acutely renders the pigeon “the urban version / of the buzzard,” not flocking to tourists feeding them in a Venice square, but “embedded in the grill of SUVs”; and, at the sudden crack of a crushed pecan shell, departing a tree en masse, and beautifully so, in a “ravishing shrapnel / of feathers.” “Pigeon Egg,” the companion poem on the facing page, shares a kindred imagery with “Pigeons” with its “bloody // calculus” of hatchlings born on “desiccated clods of potting soil.” Such blood, moreover, is not simply a byproduct of the hunt, but an ingredient intrinsic to a predator’s survival, as we are reminded in “Preying for Rain.”

A reminder that man shares in birds’ ultimate destiny appears in “Inca Dove,” where a dead young bird is buried by Thomas’ wife, “loosing it / to the shadow we’re all headed for, // the black unraveling shadow / of a phoenix on extended wing.” Thomas opens this poem through an incisive apposition where “Dove” in the title contrasts quickly with the simile of “mean-spirited schoolmistress” in the first line. In “Winged Gull” and “In Rowdy Reverence,” a synergy abounds; from the bucolic “canvas of blue sky,” gulls do their work “with breath reeking / of fresh fishrot,” still “giddy in an epiphany / of soaring, the mindless blue,” likewise, the raven’s “fetid breath fumes from his beak, / the price he pays for acumen / in the commerce of death.”

As readers may well deduce at this point, wherever Thomas’ sense of the pastoral is evoked, it is a harsh one. When we read, in “Starlings,” that these birds “descend / from the heavens / like shredded // midnight,” baby sparrows in their clutches, in order to “drop them / to burst / like ripe figs,” we witness a pastoralism equal to that of Cormac McCarthy’s Border Trilogy. Moreover, the juxtaposition of terror and beauty is Thomas’ forte, for both elements become a pact between opposites where artistic tension is created and where images are delivered so skillfully. In “Old Blue Jay,” the image of “the rosy fabric / of the dawn” is staged alongside a beautiful blue jay’s rage for eminence as it “leaves a trail / of scraggly feathers, / he could care less [about].” Such is the dark fortitude that endures across the legacy of beauty and terror.

Survival-laden habits often jar us with their severity, like the purple martin mother that murders her young, “one by one, extending / with their deaths the feathers / of a sole surviving heir / who’ll one day take to the sky” his bloody lineage, his “resilient kind.” Similarly, the crow will be “content to turn / upon his nephew // for a meal” in “Both the Proposition and the Proof.” Even among gulls we suspect as laggards in the bird kingdom, there reigns an ominous vigilance born of deadly experience. We see this exemplified explicitly in “Eyeing the Gulf,” where gulls cannot afford to spare—lest their prey flee—“for one split second, / the bestial, / ocular excellence / of their guard.” This deadly experience is captured by Thomas in interesting ways, as in “Totem Crow” where death seems to haunt even the simulacrum of a crow fashioned by the hands of men. Thomas also considers the sublime’s steeper ledge, the stalking ghost of extinction that lingers over the natural world. In “Ten Brown Pelicans,” his poet’s eye watches these species “rowing the oars / of wings through the storm- / tossed sea of extinction,” and suddenly we wonder if these creatures will go the way of millerbirds, or the pelican’s fellow sea mate, the dusky seaside sparrow.

Yet not all is the terror of the sublime, the starker realities of the hunt. There is, for Thomas and his readers, space to relish the beauty of birds. In “House Finch in Summer,” we behold the finch “never tiring of his antics, // as if relishing the air.” “Old Crow” is a celebration of the life and rustic splendor of longer-living birds abiding in blessed habitation, one “content to rattle / against the shell of odds / his tasty kernel / of longevity.” Thomas often speaks to a sense of anatomical and metaphoric duality in the fact that bird wings are hollow (pneumatized). Such hollowness is requisite for the birds’ aerodynamics, but it also harbingers fragility, one that brings them into the wider vanishings around them. Confluent with beauty are spiritual echoes that cut across several poems, not in a full transcendental sense, but in one that speaks to the junction of art and science. In “Above the Bait Stand,” gulls are “patient as pillars / of salt,” recalling Lot’s wife gazing perilously back in the Bible and Cities of the Plain. In “The Screaming, Actual Angel,” a gull becomes trapped in a church sanctuary, finally captured by a priest, the bird becoming the “actual angel / flung into the sanctuary // by the inscrutable hand of God.”

As well, there are unexpected resonances with the world of men. In “Hawks,” the raptors’ airborne formation, spaced at intervals nature bred into them, is imagistically set alongside a man musing on the sleeping form of his adulterous wife: “her slow, guiltless breathing, / the aquiline silhouette” of her silent, recumbent form. Another deep trait observed by Thomas is the persistence, if not faith, of rituals. In “For Her Nest,” humans observe, near-incredulously, doves enduring “wind and violent thunderstorms” just to keep two hopeful “perfect stems” of grass for a nest, “as if her weightless, ledge- / clawed life depended on it.”
No simple poetic ornithology, Thomas’ verse treads far afield as he folds human lore into the history of his birds. One can witness the pride of chiseling the bark of the Chinese tallow in “Hairy Woodpecker,” this folklore-laden bird “excavate / a cavity” in its florid colors of “concupiscent cockiness.” In “A Dark Choir,” Thomas reminds us that ravens have, “For thousands of years / ... haunted / human consciousness, // shuddering the quill / of poet and shaman.” On occasion, he will employ the scientific names of birds. This has the effect of casting certain birds in elegantly ominous terms.

Amid the scientific grounding, the poet finds a godlike quality to the purview of certain bird species. Thomas opens section three of his book with the austere beauty of our national symbol, noting at the onset that “Everything that moves / is potential prey / as she has / no natural predator,” soaring in almost omniscient
tones in surveillance over “everything that moves.” We find this same sense of omniscience in the owl that probes “every atom / of the shadows.” A prime characteristic of such raptors is a pinpoint aim. For under a white-tailed hawk’s boresight “a mouse freezes, / holds its breath, / but blinks / its death knell.” Unlike the misty shores inhabited by Thomas’ gulls, raptors are often set in his verse against the chasmal blue of desert skies—“a dome / of limitless, / unfaceted / sapphire.” Though expansive in breadth, Thomas leaves his enlivened readers to ponder the deep well of natural mysteries inhabiting the realm of birds, from the common crow and seagull to the resplendent, rarely-seen eagle. For those who want the best in poetry, Thomas is one who belongs on their bookshelves. I give A Murder of Crows my highest recommendation.
Posted by Sugar House Review at 3:35 PM