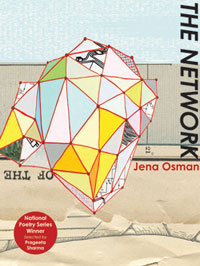 Early in his essay “Spacey Rooms: A Note on Translating ‘Lamentation on Ur,’” poet/essayist Tom Sleigh describes translation as the “attempt to experience that [deep] structure through the alienating medium, the at first incomprehensible strangeness, of another tongue.” But what of the strangeness and power that exists within one’s native tongue? Part of the thrill in reading Jena Osman’s ambitious third poetry collection, The Network, is the exploration and excavation of the English language that occurs as Osman seeks to understand the world through its existing structures.

The book is split into five sections, each called a “network,” and each of these concerns itself with a particular theme: “The Knot,” “The Joker,” “The Franklin Party,” “Financial District” and “Mercury Rising”. Each network deals with a particular event or events in history, and traces their origins into our current day through an exploration of linguistic connections. To that end, most of the sections are peppered with subject words, related to the sectioned themes, that trace these words back to their earliest roots. These maps allow the reader to see how the seemingly different words such as ‘peace’ and ‘propaganda’ derive from the same linguistic origin.

In the section entitled “The Joker,” Osman traces the early origins of the joker, or jester, from medieval times, when “only the jester could openly criticize the king,” up through the current Philadelphia Mummer’s Parade, where questions of immigration policy are acted out by white men in sombreros. Interspersed with these accounts is a plethora of historical and cultural tangents including a brief history of Victor Hugo’s novel The Man Who Laughs and its influence on the later Batman comic character The Joker, a look at the sugar monopoly in America, as well as racism after Reconstruction. Osman’s blending of prose and poetry allows different subjects to speak to each other and facilitates transitions between these subjects:

Not surprisingly, the
epic journey of Gwynplaine does not end well. He gives up his seat
in despair. Upon his return home, his true love (a blind, goodhearted
girl whose life he saved in infancy) dies. In response he kills himself
by drowning.
Before the dark sugar is put on the
American table,
it must go to a refinery to be whitened.

Although Hugo’s novel is now considered one of his more obscure
works, Mark Twain almost instantly appropriated it on publication
in order to satire the presidency of Andrew Johnson.

Thus, Osman works through a hybrid of poetry and the lyric essay. Even the more documentarian portions have a poetic sparseness to them, and like good lyric essays, attempt to answer questions about inherent racism within the sugar trade or the Mummer’s Parade.

This blending occurs in each network in the book as each section is a network of ideas and explorations surrounding language. It’s also easy to see how such an erudite and sometimes abstruse work of art reflects our current times, even while referencing history. In “Financial District,” while discussing the financial intrigues of the slave and sugar trade in America, we get the lines:

but the end, money paid as an end or settlement comes from via
end settlement. blood on the hands, a paradoxical policy of tolerance
for those who can invest. to end comes with such forms as peltry. as
whence the yields becomes becomes whence whence. the company
brought trapped Africans to the colony. clothing and architectural
implements from the English hurt trade for the Dutch.

The format of this passage is dense, yet one could almost scan the lines for meter. In addition to the blending of prose and poetry, this passage, with its rampant violence and exploitation in the name of profits, seamlessly connects the images of the past to the financial crisis of our present in a way that feels natural and unforced. Likewise, in “The Franklin Party,” that failed expedition that likely ended in cannibalism, Osman laments:

2003. While the U.S. makes its case for invading Iraq in the
newspapers, I find myself making another attempt. I hardly touch the
analogy: the brute force of the expedition, its naivete. Franklin and
his men had no plans to hunt for food, no sleds, too many mouths to
feed, giant ships that almost instantly locked in the ice, and particular
opinions about the locals.

Though Osman discounts the analogy, one cannot help but be drawn into the comparison between the tragedy of the Franklin Party and the ill-fated and seemingly endless quagmire in Iraq. A few pages later Osman drops a line that could stand as the aim of the book as a whole: “How to map a changing thing, rather than a target of frozen / particulars.” Osman tracks our histories, both of language and events, in a way that gives credence to the fact that the import and meaning of words change throughout time.

At times, the linguistic jargon is confusing. Accounting of linguistic trails and etymologies pull the reader out of the poems. Some poems drag a bit, waiting on another historical note or tightly crafted lyrical line. For example, in “Whitehall + Securities,” within the section “Financial District,” the passage ends with the lines “there remains the Latin prefix-compound: the privative prefix without / from ‘without anxiety or care’ when the adjective Latin has / derivative oblique stem whence and yield.”

While it’s clear that Osman took care to give even these passages a taut sonic quality, meaning and reference are occasionally lost in the shuffle. As the density of the jargon in this network is taxing, its length suggests import to Osman in interpreting the text. However, in a collection that is so focused on language and meaning, this confusion could be a positive attribute if the “Financial District” section had been a bit shorter.

One reason that this particular section sticks out is that the other sections so beautifully meld the linguistic concerns with imagery and musicality. Early in the book, in the section entitled “The Knot,” we get these incredibly evocative lines:

nouch, a brooch, a tie, a chain

a rope to tie the animals, ouch

polished further into depth
pushing its shell
breaking its dust

a noose is from nous see node

emerging on shore
pulling himself up
what’s this place?

ou or eu
or neo net

Here, the confusion is tempered by Osman’s attention to music and rhythm of the section. Rhyme, both within the columns and between them, helps blend the two seemingly disparate subjects into one. Furthermore, the etymological discussion that happens on the right hand side of the page proceeds poetically, the white space giving the reader time to digest what precedes and follows.

Early in The Network, the speaker tells us, “Rather than invent a world, I want a different means to understand this one.” The rest of the collection tries to understand the world, both present and past, through a close examination of language. What is realized, in a fresh way, is the old cliché of history repeating itself. Whether it’s in the racist tendencies of the Philadelphia Mummer’s Parade, first aimed at African Americans, and now more towards immigrants, or the sly influence and control big industry has in our government (at one time big sugar, now big oil), Osman’s collection repeatedly remolds the tool of language. The collection provides a fresh consideration of the many ways in which words create the world. Ultimately, in her search to understand the world semantically and syntactically, Osman imparts the sheer complexity of the language we use which, while beautiful, is a dangerous thing, rife with blind alleys and trap doors leading us to meanings we never intended.
Posted by Sugar House Review at 3:31 PM