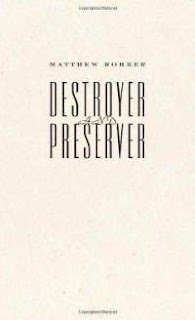 In his brilliant and immediate eighth collection, Destroyer and Preserver, Matthew Rohrer meshes, welds and bolts together phrases and sentences with precision and daring. He also allows his gift, the triple-threat of cleverness, humor and wit, to lead him to deeper and more mature and complex subject matter. The poem “Casualties” begins, “My son says / are soldiers good or bad? / I say it’s very complicated.” Rohrer freely moves into melancholy and despair. Arriving there, however, he makes a series of choices that his fast and engaging use of language provides (and even requires): evasions, shifts and jukes of which the late Walter Payton would be proud. Rohrer is a master of renaming the metaphoric impulse at its finest. In his best poems, he goes on counter-attack of the serious subjects our culture compels him to put into play and, splicing on one more statement or image and then another one, he counters again. Destruction and preservation mingle, often in the same line, throughout these poems; they become unified, not separate, impulses, which is what makes these poems exciting and necessary.

The mundane and its ongoing complications—raising a family, getting older, doing the day to day—is the starting place for many of these poems. “Dull Affairs,” one of the best in this book, begins,

How am I to concentrate
on the heavy and dull
affairs of state
with the sound of a baby having a dream
in the other room.

Unlike the speaker in the above passage (and Rohrer’s conception and realization of art, we could say), the state

cannot change
it is like the sound of a baby crying out
that is only imagined
it is much worse/a small cloud
that looks like an enormous flea
crouches over the city.

A restless interrogator and transformer, Rohrer ends the next poem, titled “They Pull a Suicide from the Water”: “they pull a suicide from the water / I clip my toenails out the window / it is going to rain.” There are many uses for the mundane. In Rohrer’s poems, the mundane bores, inspires, distracts, angers, confuses, burdens, gives, takes away, distresses, soothes. At the end of “Poem for Starlings,” which recounts just another harried day of not getting his way in the city, the speaker says all we really need and want him to say, “I wish / the world were different.” “The Terrorists,” a poem in five parts, is mysterious and ominous. A series of 24 interconnected spare four-line stanzas describes a vivid commute. It’s titled “Believe.”

Aware that punctuation is just a 15th century innovation, Rohrer eschews it in most of these poems, and summons it idiosyncratically in others. This creates openings and opportunities for his complex and multi-layered voice. Like almost everyone else who has been reading and writing poetry during the last 50 or so years, it is clear that Rohrer has been listening to W.S. Merwin, who established the possibilities for ambiguity at the level of the line, and Merwin’s many descendants. But if Merwin is trail guide to the transcendent, Rohrer is watching us, and watching us watch him, as he moves us down the trail toward a transcendence that is almost always incomplete. Make no mistake: this stunted transcendence is no fault of these poems, which are remarkable and genuine achievements. The complex culture, with its endless levels of social distortion, anxiety, compromise and horror, intervenes—and Rohrer is right to acknowledge these facts, right here in these vivid and contemporary poems ... right in the middle of a line. And then, with and for us, he provides a service, turning away.