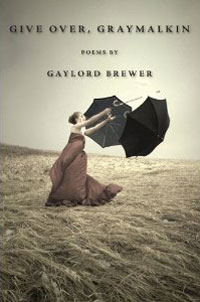 Give Over, Graymalkin by Gaylord Brewer
(Red Hen Press, 2011)

“Leaving the road for that enticing artery of dirt, / chance greeting desire. Human world / soon mute, I followed this sharper attentiveness,” recounts the speaker in Gaylord Brewer’s poem “Jungle Appetites.” From his path this traveler has been called to branch off onto an earthy “artery” that is more alluring. Fate has presented an opportunity that stirs something wanting; as the “human world” diminishes audibly, he is open to the awe of some other place. One might deduce the speaker’s direction is transformative, toward higher consciousness, for to get there he must follow a “sharper attentiveness.”

“Jungle Appetites” is found in Brewer’s eighth book of poetry, Give Over, Graymalkin. The poem’s speaker, having evaded “guide and driver,” follows the call to probe his exotic surroundings.

Here is a moment would-be explorers can relate to—escaping to a wild place where “elephant dung mark[s] the way.” Behind the scenes and beneath a “canopy of peem and pine,” the reader is greeted with the sensations of the inner jungle. The child in us understands the excitement of visiting an unfamiliar region—off-limits and therefore hallowed—and the glory of some taboo and gross act, like kicking a brick of dung. This poetry invites readers to revisit what the newness of adventure feels like through the apt vehicle of the poet’s travels and thoughtfully crafted poems. Readers find themselves immersed in the contemplative, like the speaker toward the end of “Jungle Appetites”: “From the spidering crux of an immense banyan, / I watched the light move and tried to listen.”

Brewer’s collection engages with adventuresome verse that is lyrical, rhythmic and lush with allusion. For instance, “Dead Metaphor: Fidelity,” contains the sagacious lines:

You know any charm outside four walls

is siren-song, first order Circe or Charybdis.
Soft lie of lips, arm grazing hip and so on,
Exist anymore as grainiest abstraction,

Its counterpart on the following page, “Dead Metaphor: Infidelity,” describes an unlikely cheating wife from the suburbs: “Head abuzz with physics of deniability. / Even your name hangs tight in the shoulders;” and ends cheekily:

I cannot tell a lie, you mumbled again,

as the cherry tree went promptly down
and you stroked the Delaware together
toward some terrible, rapturous new country.

Making the serious humorous and vice-versa, Brewer wryly nails the issues up for viewing. To be or not to be faithful are admittedly social classics, all the way back to the Greeks, and even Washington was not, and still isn’t immune. To label this poet jaded, however, would be myopic. His work is also reverent and straightforward, as evidenced in “Dead Metaphor: Day Lilies”, which begins:

The crisp snap of each neck as you collect yesterday’s
prizes in two hands—monument of dripping mush.
Today’s today, another morning of inventory and praise,
and continues its beautiful and brutal realism farther down the page:

June sun will pale her lemon throat to ivory,

There is such pleasure to be discovered in line after line that it’s almost easy to forget to consider each poem as an orb within the larger composed universe and that, as with each poem’s title, there is the matter of the book’s title. An unfamiliar title begs the reader to consider its allusion. Brewer’s Give Over, Graymalkin points to a line inSuttree, a novel by Cormac McCarthy, in which the protagonist has exchanged his socially acceptable but meaningless life for one of wandering the outskirts of 1950’s Knoxville and encountering its cast of fringe characters.

The poet gives clues to this choice of title with the epigraph to his book’s third section, “South to North,” “Give over, Graymalkin, there are horsemen on the road with horns of fire, with withy roods.” This phrase appears in Suttree as its principal is running toward the mountains and away from a witch-woman whose potions have caused him disturbing dreams. “Graymalkin” is a name attributed to a “familiar spirit” or witches’ helper, one of the spirits in Shakespeare’s Macbeth, and one that often takes the form of a cat. Brewer’s reference to Suttree’s surreal milieu draws an imaginative framework for the poems of Give Over, Graymalkin. It suggests that there are multiple worlds to navigate: the tangible place we breathe in and the breathtaking others—of faith, imagination and possibility—where things and dimensions are not easily defined.

“To the Wind” is an ode in the “South to North” section that sings amidst its footing of measured syllables and restrained lines and illustrates the wind’s ranging effects on its environment. It begins,

You are the muscled silence
that roughs the world to sound.
Waves growling and aroused.
ripe applause of olive grove,

The first line unexpectedly joins an animal attribute—muscled—to the now charged “silence.” What might be regarded as a void of noise has physical power that, in the next line, “roughs the world to sound.” Further, “sound” in such close quarters to “world” suggests “round,” denoting the world’s girth and the prowess needed to stir it. The mighty wind affects “waves growling and aroused,” thus evoking the sensual, tense setting of a world where animal/human qualities are assigned to non-human entities. “To the Wind” brings to mind the bulging rocks and strained sky of William Carlos Williams’ poem “Spring Strains,” in its sensibility and in delegation of pathos to the interconnectedness of nonhuman things, qualities reflected throughout Brewer’s poems.

As the otherworldly wind generates “ripe applause of olive grove,” Brewer’s talent with sound is showcased. The poem grooves in its repetition of “v”s— “waves,” “olive,” “grove”; and its repetition of “ow”s—“sound,” “growl,” “arouse.” The melodic vowel mix of the lines that follow offers a bit of relief to the poem’s tension:

cool gossip between the cedars,
whispering mountain rose, prickly
and languorous. I too am nearly
defenseless to your bullying
as you articulate the sail of my shirt
fiercely across chest and plane
a quiet urgent lyric over cheek.

Relief is quickly replaced with new tension when the poem’s speaker identifies his own vulnerability to the “bully” wind, that is also sophisticated enough to “articulate the sail” of his shirt. The poem ends uneasily with the disclosure that the wind’s sway is brutal though “not quite” limitless, while an abused shutter on its hinge suggests a metaphor for the thread by which life hangs.

I’m nearly upended, but not quite,
unlike the shutter you rudely
slap open and shut all night long,
until exhausted on its hinge.

Brewer’s poems are the unapologetic products of a mature writer, fresh presentations of our human role as travelers, vulnerable to some degree. There is more than one state of lost just as there is more than one path to redemption. From what is strange to what is negotiated, part of our journey is trying to understand and aim for peace, even if no resolution or accord exists. Give Over, Graymalkin also reminds us of what is most dear: simple earthly pleasures andfamiliar memories of togetherness that comfort when we are far from home.