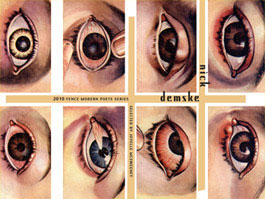 In sitting down to write a review of Nick Demske’s debut collection, Nick Demske, I wanted to pay homage to the man, to find the perfect contemporaries and precursors to compare him to and lump him in with, to fit him comfortably into the ultraviolent or infrared end of the sonneteer spectrum.

But I had to be honest with myself, and with you, Nick Demske. Your willingness to address yourself in the third person again and again like some kind of hip-hop mogul makes me comfortable addressing you directly. This admission only serves to display how the prime real estate of my mind has been foreclosed on by pop culture but, throughout my reading of Nick Demske, all I could think of was a stunning routine by comedian David Cross where he describes the way rednecks threaten one another before a barfight:

Nick Demske, as you say in “Will Not be Televised,” I’ve been “Nick Demsked.” Your poems are a motherfuckin’ earthquake, wrapped in a hurricane, nestled in a box of tsunamis. Unlike the Nick Demske in “Pop Sonnet” who tries “not to think about art,” I am trying to think about it, but like the best Priapus poems, your sex jokes and scatological references remind me that the overlap between those two views is where all the fun is.

Nick Demske is, ostensibly, a collection of sonnets. It’s more like sonnet taxidermy, the sonnet eviscerated. The hide is in place, the constraints are there, but our pet is no longer our pet. The eyes are different and the lips curl up just so. The fourteen lines are present, except when they trail off, as in “Sonnet,” which contains only the octave and ends,

[ ... ] Because I say it’s
Poetry. Because I am the substitute teacher, better than any
[insert six more lines here]

The rhyme schemes are present though Demske innovates on the form by breaking words to make rhymes work. These breaks are startling, confusing, and simultaneously hilarious once the pattern begins to emerge. The first example is in “Common Sense,” which begins,

I didn’t think it was loaded. But it was a kn
Ife. So we’re both right. I forsee

The last word in the first line is later rhymed with “dan” rendering the “k” in “kn” silent. “Dan” itself is a cut-up of “dancing” and the second syllable has been sent to the beginning of the next stanza. Later in the poem we find a similar tactic, only this time using slant rhyme.

Uglying everything else a reflect
Ion so unfamiliar you feel impolite confronting it. I am the lex
Icographers, staring back into a nightingale.

Some of these breaks seem more self-conscious than others. The ones that work best offer both pause and insight into the image against which they are juxtaposed or they participate in one of the numerous jokes or puns that Demske employs, as in the second stanza of “Breakdown” which ends,

Gawk. You’re ruining the ending like a pre
Mature apocalypse. You suck at life. Your combustion lacks spontaneity

These breaks beg for the poems to be read out loud. When they are verbalized, they give the poems a stutter that would make Tzara and Schwitters proud (there it is, Nick, I finally got some names in here).

As if the line breaks aren’t enough to keep the reader off kilter, the passage dem-
onstrates another prominent Demske peculiarity—self-reference. The title of the book clues the reader into this immediately but he wastes no time working Nick Demske into the poems.

Remind me what it’s like to be offended, Nick Demske.
Ah.       Already with thee.

And several pages later, in “Hotdog,”

Nick Demske you are everything wrong with the world. Which is to say: the wor
Ld. Share with me your secret ingredients.

Remarkably, the trope is not tiresome. Instead, we look for Nick Demske to return—extravagant, prodigal son that he is—and his absence is conspicuous. Nick Demske the character quickly becomes a kind of Coyote or Loki figure within the book, while Nick Demske the author broadens his scope of self-reference to include not only himself, but also the larger task at hand—the writing of the book. Demske references his own trials with poetry repeatedly, each time more self-effacing and charming than the last. In “Bowdler-Dash” he writes,

Do not look directly at the poem. Offer val
Id only at participating locations. MF
A. Slave dialect. I want your native tongue in the recess

and adds an even more striking example in “As a Dog Returneth to His Vomit,”

So far up the Muse’s tuchis we still shit shards of meter.

In Nick Demske, we are dealing with a man who knows himself well and likes what he sees; even his failings shine. But this is not narcissism, not self-love for its own sake. Demske simply can’t resist a good turn of phrase (i.e. “If you’re going to act like a brat, / I’m going to eat you like one”), especially those in which the profane glad-hands with more conventional images. He appreciates that the best jokes come at the expense of one’s self, such as in “Bowdler-Dash”

[ ... ] I’m a tramp on the streets and a Jesus freak
in the bed. Don’t ask stupid questions? At a low, low price? Point and click.
Shuck and Jive.     Do you want to feel
My scars? My sweet topography, like rubberized Braille?
I thought you’d never ask.

That said, the best joke in these poems may be the one played on those for whom poetry is only a matter of reverence, poetry spelled with a capital “P.” Here poetry is force bred with pop culture to make a nightmarish amalgam—a swearing, retching, fucking beast that, unlike most of our crimes against nature, is far from sterile and much like revered fallen pop stars, is impossible to look away from. Thus, we see Dr. Love, Dr. Kevorkian, Dr. Huckstable and Dr. Frankenstein appear back to back to back to back in “Everything Personal.” It is no small feat that Demske rhymes delectable with Huckstable or that Madonna should appear as the muse at the end of “Pop Sonnet” in what is a deceptively ominous couplet about inspiration.

These jokes are deftly arranged and the reader is as likely to gloss over them as they are to laugh out loud. What is more impressive is that they never grate. Instead, they propel the book forward, much like trickster Nick Demske, and make of it a puzzle. However, the most remarkable thing about Nick Demske is how subtly Nick Demske uses references and puns to lure the reader into deeper and darker waters as the book progresses. This is a funny book, but it is not just a funny book. Its humor begins to coalesce into a defense mechanism that leaves the reader wondering which emotion is a suitable response, embodying the lines of “View From a Balcony.”

[ ... ] I’ll hold back your hair. Like lovers, we two; obscene.
Rest your weary head, which is a chip, on this shoulder. Which is a guillotine.

Nowhere is this effect more disorienting than in “Dying Words,” which is quickly recognized as partly a litany of taglines from pop culture artifacts but is devastating nonetheless.

I want of a better word. I want to go to college.
I want my money back. I want an apology.

So maybe, in the end, this poetry thing is serious business. Maybe Nick Demske
is on to something here. After all, how much of our favorite comics’ best work is
birthed in tragedy? Perhaps humor is the best way through the attention-deficit
morass we’ve made of our culture. Late in the book, Demske writes “Wow. How
do you follow that? Perhaps with a procession / Of mourners, a light reception.”
In the book’s final poem, he offers a glimpse into the birth of the quipping mad-
man that occupies most of its pages and he comes out of it decidedly human,
frail, and sharp.

Something undoable. I want to kiss you
And reveal my secret feelings for you. For a long time I considered
Hating everything in the world. Instead, I decided
To huff it. All of it.
Posted by Sugar House Review at 3:26 PM